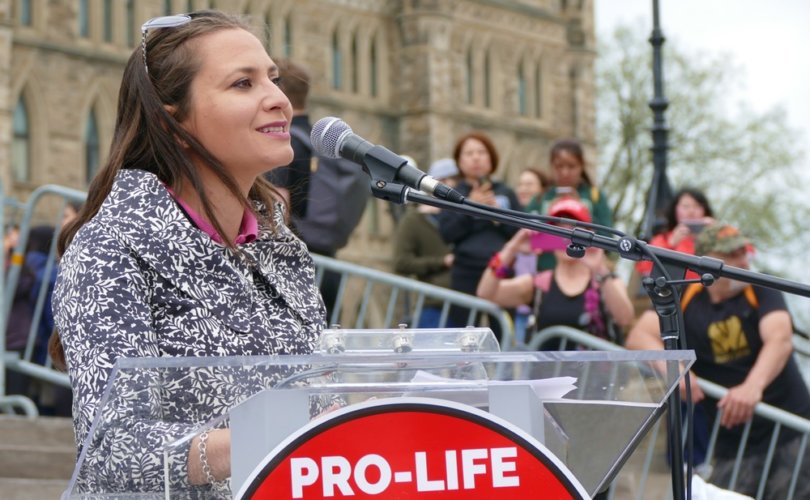 Tanya Granic Allen speaks at the 2018 March for Life in Ottawa.Patrick Craine / LifeSiteNews

“It is wonderful to be able to stand here today and greet you, and thank you in person,” Allen, the president of Parents As First Educators (PAFE), told the crowd. “I am stunned, blown away, humbled, grateful by the support you have shown me over these past long, long few months.”

Allen was a candidate to lead the Ontario Progressive Conservative Party for the Mississauga Centre until Ontario PC leader Doug Ford removed her from the race last week over past comments she made about abortion, same-sex “marriage,” and sex education.

Despite that “disappointing news,” she told pro-lifers, “you and I are here for a very important cause. You stand for human rights for the unborn, and for free speech, just like I do. Just like I do, you use your voice for the betterment of our society.”

“I tell you today I commit to you, I will continue to be a very strong voice for the families and for the children of Ontario. And for the unborn,” Allen vowed. “Please, I ask you, raise your voices and stand with me, and use your voice so we together can make Ontario and make Canada, this great nation, the place it should be where we have human rights and free speech for all.”

Yesterday, Allen addressed the controversy at length for the first time in an op-ed for the National Post. She explained that the controversy stemmed from comments she made at a 2014 Catholic Croatian youth conference, where she said it made her “vomit in disbelief” to see Croatia “embracing a policy of compulsory sex-ed and promotion of the doctrine of gay marriage on the children,” specifically because “so many lives had been lost to secure our freedom of religion, only to have new oppressors emerge some 20 years later.”

Allen affirmed that she believes in Catholic teaching marriage that marriage is between one man and one woman.

It’s a “slur against the Catholic faith and, indeed, against people of all faiths who hold their religious values dear,” she wrote, to insinuate that opposing same-sex “marriage” means opposing “the dignity and human rights of LGBT+ people.”

“For this, I have been accused of wanting to force my religious views on the people of Ontario using the sex-ed curriculum. That is incorrect,” Allen replied. “I support the true separation of church and state, but that separation has to go both ways, which includes religious liberty free of state interference.”

Allen concluded with the same promise she made to the March for Life, that she is “not going away.”

“When the PCs win a majority government on June 7, we all look forward to continuing the fight for Ontario children, parents, and families,” Allen declared.