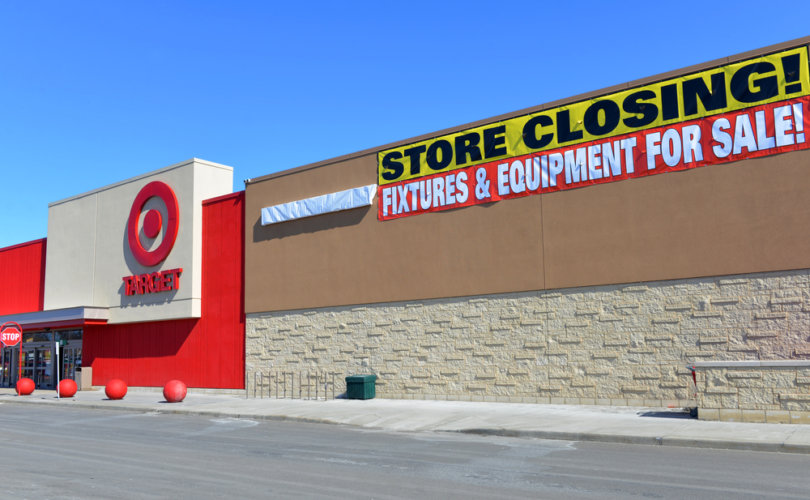 April 29, 2016 (LifeSiteNews) – Over 1 million people have signed a pledge to boycott Target over its new policy allowing men to access women’s bathrooms.

“Corporate America must stop bullying people who disagree with the radical left agenda to remake society into their progressive image,” said AFA President Tim Wildmon. “#BoycottTarget has resonated with Americans.  Target’s harmful policy poses a danger to women and children; nearly everyone has a mother, wife, daughter or friend who is put in jeopardy by this policy.  Predators and voyeurs would take advantage of the policy to prey on those who are vulnerable.  And it’s clear now that over one million customers agree.”

Target defended its policy in a statement saying that it believes everyone “deserves to be protected from discrimination, and treated equally” and earlier this week, a Target spokeswoman defended the policy as “inclusive.”

The AFA said that unisex bathrooms are a common-sense alternative to allowing men unfettered access to women’s bathrooms.

“Target should keep separate facilities for men and women, but for the trans community and for those who simply like using the bathroom alone, a single occupancy unisex option should be provided,” the petition says.

The AFA warned that Target’s new policy benefits sexual predators and poses a danger to women and children.

“With Target publicly boasting that men can enter women's bathrooms, where do you think predators are going to go?” the petition asked.

There have been numerous instances of predatory men accessing women’s bathrooms and intimate facilities in the wake of “transgender” bathroom policies allowing them to do so.

“We want to make it very clear that AFA does not believe the transgender community poses this danger to the wider public,” said Wildmon. “Rather, this misguided and reckless policy provides a possible gateway for predators who are out there.”