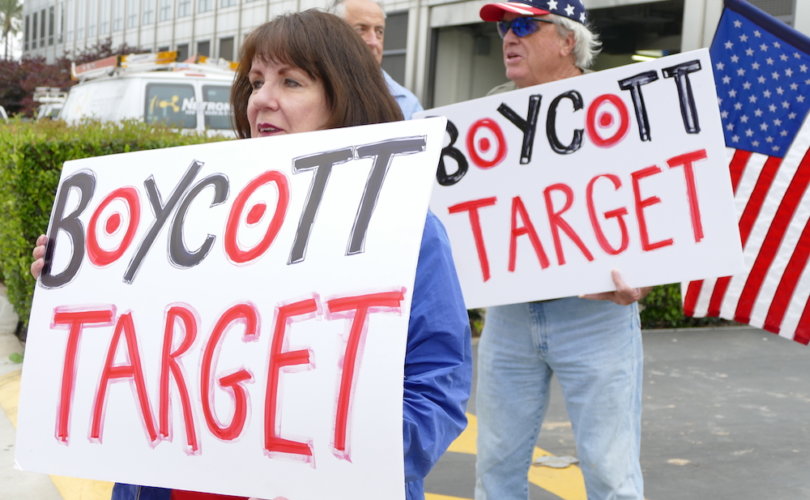 MINNEAPOLIS, Minnesota, April 5, 2017 (LifeSiteNews) – LifeSiteNews’ call to action over the transgender bathroom policy at one of the nation’s largest retailers continues to have a substantial impact.

“LifeSiteNews put up billboards in Oklahoma urging customers to #FlushTarget and drove a truck with that message to stores near Target’s headquarters in May,” the WSJ piece states. “Protesters attended Target’s June shareholder meeting to speak out against the policy.”

LifeSiteNews was at the shareholder meeting to report on opposition to the policy.

Target posted its policy in April 2016 in response to North Carolina’s hot-button HB2 law regulating bathroom use by biological gender.

“Inclusivity is a core belief at Target,” the Minneapolis-based retailer’s post last year said. “It’s something we celebrate. We stand for equality and equity, and strive to make our guests and team members feel accepted …”

At the announcement, Target converted half of its red bull’s-eye logo into a gay-pride rainbow.

Target’s policy in effect allows any customer at any time and for whatever reason to use  bathrooms or fitting rooms of the opposite sex in its stores based solely upon subjective “gender identity.”

LifeSite, along with other families groups, sprang into action last year, asking Target to withdraw the policy.

Billboard trucks went out around Target’s Twin Cities’ home office area and stationary billboards were placed elsewhere in LifeSite’s #FlushTarget campaign. The billboard trucks were necessary after every billboard company in the state of Minnesota turned down the ads directed at Target.

The campaign included a video depicting the dangers of mixed-bathroom access that received more than a million views on social media.

Family groups decried the disregard for privacy and safety in the policy, and the sentiment resonated with families. Opposition to the policy resulted in more than a million people signing American Family Association’s pledge to boycott the retailer.

Target leadership remained indifferent to the concerns, even as its stock plummeted.  CEO Brian Cornell defended the policy, likening it to 1960’s-era race-related civil rights. Later in the summer as its earnings continued to drop, Target announced plans to spend $20 million to install single-use restrooms in its stores, even as it stood by the controversial policy.

The WSJ report illustrates how Target still doesn’t get the point a year later.

Written from the perspective of a memo that shouldn’t have gotten out, the WSJ portrayed a company doing damage control, acting in many ways in the last year to counter falling revenues, and to shore up procedures for release of public statements.

Target, though, still believes nothing is wrong and is sticking by its “transgender” policy.

“Target executives have said any lost sales from the boycott weren’t significant enough to require reporting to investors,” The WSJ report stated. “Target’s business nonetheless is in a funk. Sales at stores open at least a year have declined for three straight quarters.

The report goes on to say that in February the company issued “a gloomy sales outlook.”

Target executives conducted focus groups to better understand customers in markets where sales dropped the most because of the bathroom issue, the article said, and “Mr. Cornell wanted ways to win back shoppers without agreeing to demands that Target retract its policy.”

The WSJ pointed out that Target’s “transgender” bathroom policy is not unlike that of many other retailers but that its execs will keep quiet in the future about such matters.

The boycott “seemed to matter,” Buckingham Research Group analyst John Zolidis stated in the WSJ, “but there are many crosscurrents in retail, and Target has other problems.”

Several former Target customers explained that they changed their shopping habits as a result of the “transgender” bathroom access policy.

LifeSite Director of Public Relations Andy Parrish oversaw the billboard trucks in the campaign. He has also changed his personal shopping habits, refusing to shop at Target.

Parrish believes the company’s stance poses a very real danger to the public.

“Sexual crimes are often crimes of opportunity, allowing grown men in the girls bathroom increases opportunity for sexual crimes,” Parrish said. “I choose my daughters’ safety over convenience of shopping at Target.”

Parrish noted the staying power of this current response to Target’s policy.

“Unlike most boycotts, people have adjusted their lifestyle and they are not going back,” he said. ”This is Target’s new normal.”