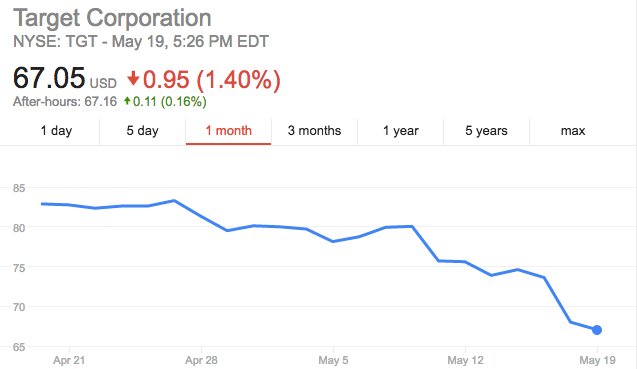 One month after announcing bathroom policy, Target stock is down by more than 19 percent

May 19, 2016 (LifeSiteNews) — Target Corporation stock is continuing to sink in value as it faces the boycott of over one million Americans. The American Family Association (AFA) launched the boycott after the retail giant announced its new policy allowing men to access women’s restrooms and changing rooms.

When Target announced its policy on April 19, its stock was valued at $83.50 per share.  Now, one month later and after a massive outcry from the public which included over 1.2 million people signing AFA's petition, Target stock is $67.17 per share.

All told, this means Target stock has declined by over 19 percent since announcing its new open bathrooms policy.

While the timing of the stock drop coincides directly with the launch of the boycott effort, Target CEO Brian Cornell claimed this week that the company’s woes are unrelated to their new bathroom policy.

“To date we have not seen a material or measurable impact on our business. Just a handful of stores across the country have seen some activity and have been impacted,” he told Fortune during a call with reporters this week.

TheStreet, which was on the same call, reports that Cornell declined to state exactly what impact the boycott has had on those stores.

According to Fortune, Target blamed low sales in the beginning of the second quarter, and consequent stock price drops, on “damp and cool weather,” and “skittish” consumers, in Fortune’s words.

Meanwhile, boycott efforts aimed at Target are only growing. LifeSiteNews’s #FlushTarget campaign, launched this week, is encouraging the public to ask Target to rescind its policy.  The campaign is getting the word out through a billboard truck that has begun visiting every Target in the company’s home state of Minnesota, and may expand to other states.

LifeSiteNews was forced to use a truck instead of a traditional billboard after all four of Minnesota’s billboard companies rejected the #FlushTarget ad.

The truck has received widespread media coverage from conservative and mainstream media outlets, particularly in Minnesota.

Cornell has vigorously defended the company’s new policy and even compared it to an advance toward racial equality in the 1960s, when Target first used African-American models.