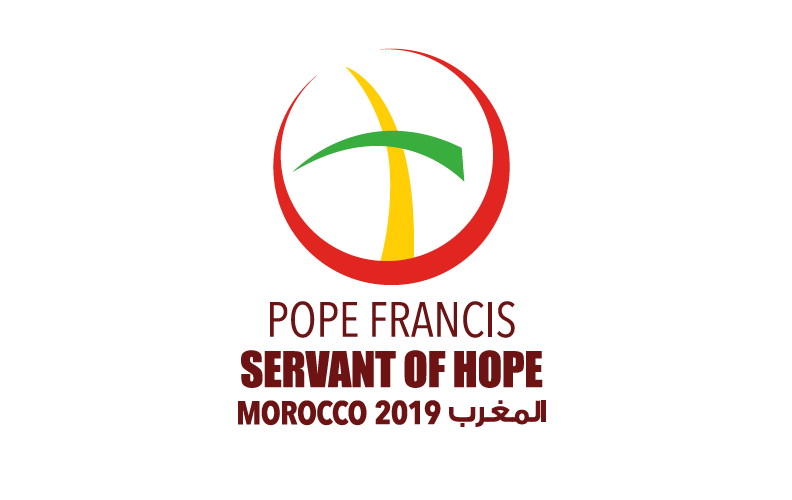 ROME, January 8, 2018 (LifeSiteNews) —The Vatican has released a new symbol of “interreligious encounter between Christians and Muslims” in advance of Pope Francis’s upcoming visit to Morocco: a logo featuring the crescent encompassing the cross.

But some regard the development as reminiscent of C.S. Lewis’s final Narnia book ‘The Last Battle,’ where the true religion is synthesized with the worship of the militant warrior culture of Calormene to the south of Narnia.

The official logo for the Pope’s apostolic visit to the cities of Rabat and Casablanca on March 30-31, 2019 (pictured below) was chosen from among 50 competition entries, a Jan. 7 statement released by the Vatican said.

The Vatican explained the logo’s symbolism in this way: “A cross and a crescent: the Christian cross and the Muslim crescent = the dimension of an interreligious encounter between Christians and Muslims, the meeting of Pope Francis and the Commander of the Faithful in Rabat, 800 years after Francis of Assisi’s meeting with the Sultan.”

The papal visit to the Muslim-majority nation is taking place at the invitation of King Mohammed VI of Morocco and the country’s Catholic bishops. According to the Moroccan constitution (art. 19), the king is the “Amir al-Mumineen” (Commander of the Faithful) and the defender of the [Muslim] faith.

The colors of the 2 countries are also used in the logo: green and red for Morocco, and yellow and white (the background) for the Vatican.

According to the Jan. 7 statement, the logo’s caption — “Servant of Hope” — indicates that “the Holy Father is the Servant of the Servants of God,” but adds that it is also the title of the pastoral letter which the Regional Episcopal Conference of North Africa (CERNA) gave to Pope Francis during its last ad limina visit in 2015.

Morocco’s name is written at the bottom of the logo in Arabic to “honor the country” hosting the Holy Father, it said.

But a number of observers in Rome see the logo as “problematic,” with one source telling LifeSite it “seems to imply that the two religions are perhaps equal — or that there can be some syncretism between them.”

“While one might argue that the cross is on top of the crescent (a sign of victory), the crescent is enveloping the cross, and so visually suggests syncretism,” another observer noted.

“The nature of a religious symbol is that it summarizes the essence of a religion; it provides a visual image that recalls a core belief and provides a call-to-action that is paradigmatic of that religion,” a source in Rome explained. “The cross tells us we are to imitate Christ’s sacrifice for the salvation of the world. But the crescent recalls Muhammed’s Hijra [migration] from Mecca to Medina.”

However, the source added, “in typical club-footed Vatican work, they have overlooked the fact that the symbol has had more of a Islamic-nationalistic use, especially during the Ottoman empire which tried to conquer the Christian West.”

“It’s as if the organizers are saying, ‘Francis is a servant of non-Christian hope,’ because he represents hope that is not founded in Christ’s saving work, but in a secularized peace through political acceptance.”

By way of comparison, the observer said the logo for the Pope’s apostolic visit to Egypt is “better” because “it doesn’t meld the religious symbols.”

Just hours before the logo was released, Pope Francis spoke of his upcoming visits to the predominantly Muslim countries of Morocco and the United Arab Emirates. In an address to the Holy See’s diplomatic corps on Jan. 7, he said the visits “represent two important opportunities to advance interreligious dialogue and mutual understanding between the followers of both religions, in this year that marks the eight-hundredth anniversary of the historic meeting between Saint Francis of Assisi and Sultan al-Malik al-Kāmil.”

Additionally, Pope Francis has said in past statements that interreligious dialogue should be built on openness, not a “superficial syncretism.”

But some, taking a more pessimistic view, think the Morocco logo represents “Francis’s capitulation to Islam and his desire to replace Christian civilization with a non-religious world order.”

“Just as Muhammed’s ‘migration’ to Yathrib changed the city’s name to ‘Medina’ and represented his conquering spirit, so the ‘migration’ of Muslims to the West will inevitably change our place-names and open the door for them to conquer what remains of Christian civilization,” one source said.

Some, however, have compared the cross and crescent logo to the religious deception central to C.S. Lewis’s final Narnia book ‘The Last Battle,’ where the true religion is synthesized with the worship of the Calormene culture to the south of Narnia modelled on the Islamic Ottoman Empire.

It mirrors “the syncretism of Aslan and Tash invented by the Narnian version of the Antichrist,” one source told LifeSite.

The Chronicles of Narnia is a series of seven fantasy novels for children and is considered a classic of children’s literature. Written by C.S. Lewis and first published in London between 1950 and 1956, it presents the adventures of children who play central roles in the unfolding history of the fictional realm of Narnia, a place where animals talk, magic is common, and good battles evil. Aslan the lion, who represents Christ, is the central character of the series.

“In Lewis’s fiction, in a tableau intended to parallel the End times of Christian Scripture, the people of Narnia are encouraged to welcome the migration of the Calormenes into Narnia and are told by a treacherous Narnian ape who preaches a new faith to worship a composite deity of Aslan and Tash, the god of the Calormenes, represented by a donkey dressed in the skin of a lion,” the source explained.

The treacherous ape (called Shift) reinforces his claim that Aslan and Tash are really two different names for the same person by naming the new composite deity Tashlan.

How is the cross and crescent logo for the Pope’s upcoming visit to Morocco similar to Tashlan?

The logo combines the life giving Cross of Christ with the symbol of a man Christians hold to be a false prophet and an enemy of the faithful in seeming defiance of St. Paul’s words “Do not be unequally yoked with unbelievers. For what partnership has righteousness with lawlessness? Or what fellowship has light with darkness? What accord has Christ with Belial? Or what portion does a believer share with an unbeliever? What agreement has the temple of God with idols? For we are the temple of the living God (2 Cor 6:14-16).”

“Traditional Muslims would also reject harmonization of this kind and find it offensive,” the source added. “Lewis himself recognizes the good intentions and will to worship God of those Calormenes who reject syncretism. After the defeat of the false religion in the story, a Calormene who rejected it in favor of the creed he falsely supposed to be true encounters Aslan at the end: ‘I overcame my fear and questioned the Glorious One and said, Lord, is it then true, as the Ape said, that thou and Tash are one? The Lion growled so that the earth shook (but his wrath was not against me).’”

Vatican II allows for the possibility of such extraordinary revelations as the righteous Calormene receives in Lewis’s story. According to its decree on the mission activity of the Church, “God in ways known to Himself can lead those inculpably ignorant of the Gospel to find that faith without which it is impossible to please Him” (Ad Gentes, 7).

However, the Church is equally clear that the followers of other religions do not have the faith without which it is impossible to please God. “The distinction between theological faithand belief in the other religions, must be firmly held. If faith is the acceptance in grace of revealed truth, which ‘makes it possible to penetrate the mystery in a way that allows us to understand it coherently,’ then belief, in the other religions, is that sum of experience and thought that constitutes the human treasury of wisdom and religious aspiration, which man in his search for truth has conceived and acted upon in his relationship to God and the Absolute” (Dominus Iesus, 7).

In other words, God can lead the inculpably ignorant through mysterious means to the true faith, but adherence to Islam or any other non-Christian religion cannot constitute this faith.

The Church teaches that Muslims as such do not have supernatural faith. “When St. Francis went to visit the Sultan 800 years ago,” the observer therefore remarked, “he did so to convert him to the Gospel.”