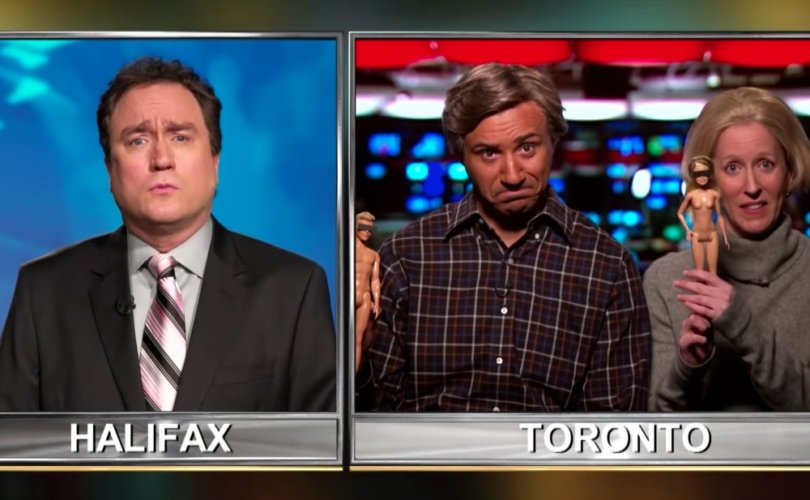 The group also condemned the curriculum for presenting sodomy “in a way that students would interpret as carrying no higher risk for Sexually Transmitted Infections than vaginal intercourse,” encouraging the use of condoms and artificial birth control (including expecting Catholic schools to teach this message), and an “undertone of sex as a purely recreational activity whose purpose is pleasure, apart from love or marriage,” among other concerns.

A recent segment on the CBC comedy show “This Hour Has 22 Minutes” took aim at the CLC by name, displaying the group’s logo onscreen and having two cast members portray CLC representatives discussing the issue on a news program.

Instead of engaging with any of the real-life organization’s detailed objections to the curriculum, however, the segment casts critics as dim-witted, delusional people with a completely different set of complaints and goals.

“There’s always a mom and a dad, you just have to look for it,” the male guest says. “Which one is prettier? That’ll be the mom. Which one watches golf? That’ll be the dad.” His female colleague adds that the “one that looks like a long-legged bird” is the “stork who brought them the baby.”

The CLC caricatures next call for students to be taught “nothing, zip, zilch, nada” about human sex organs, with the adults going so far as to shudder at the mere mention of the words “penis” and “vagina.”

“Children shouldn’t even know what’s down there,” they argue, holding up nude Barbie and Ken dolls they propose as alternative “anatomical models” to convey that there is “nothing is happening south of the equator.” The adult guests are also depicted as being traumatized by the sight of their own genitals.

“We also discourage kids from wiping,” the female character adds.

“I don’t know how much more there is to discuss, it seems you’re committed to your own version of reality,” the host says in conclusion, which the fake CLC representatives mistake for a compliment.

“Although it was at times mildly amusing, the caricatures of what our organization stands for were totally divorced from reality,” Campaign Life Coalition's real life Director of Political Operations, Jack Fonseca, told LifeSiteNews in response. “We just have a different world view than the elites at the CBC. They believe in sexual anarchy and that sex is a recreational pass-time, sort of like playing tennis. We believe that sexuality is much deeper, more powerful, more fulfilling force in our lives,” which within marriage “becomes a mutual and beautiful giving of self to the other, in sacrificial love, and which makes us open to sharing in God’s procreative power.”

“At an age-appropriate level, we will explain to our children that homosexual family structures exist. By age 8 or younger, as the Wynne curriculum mandated, was not age-appropriate,” Fonseca explained. “Neither was it neutral, but rather had the sole aim of indoctrinating kids to reject the religious beliefs of their parents.” As for proponents' claim that young children must be exposed to homosexuality to combat bullying, he stressed that if “we teach our children to follow this command by the son of God” to love God and love one's neighbor, kids will “treat others with dignity and respect, including those who are same-sex attracted.”

“Again, this is far too complex and nuanced for the elite folks at the CBC to even try to understand,” Fonseca lamented. “By and large, the teachers who want to present these topics have no respect for the family’s religious, moral and cultural beliefs. All they offer is contempt.”

This isn’t the first time “22 Minutes” has offended traditional Canadians. Past controversial skits have included a Canadian pope replacing the Eucharist with coffee and donuts, and one telling Saskatchewan MP Brad Trost “we’d like to raise you just one” finger over his defense of natural marriage. In 2016, the Liberal government pledged $675 million in funding to the CBC, an increase of $150 million over the previous year.

Wynne’s successor, Doug Ford, came into office vowing to repeal the curriculum, though this month pro-family activists called on Ontario parents to submit feedback to the Ford government urging it not to repeat the Wynne plan’s flaws in the province’s next sex-ed curriculum.