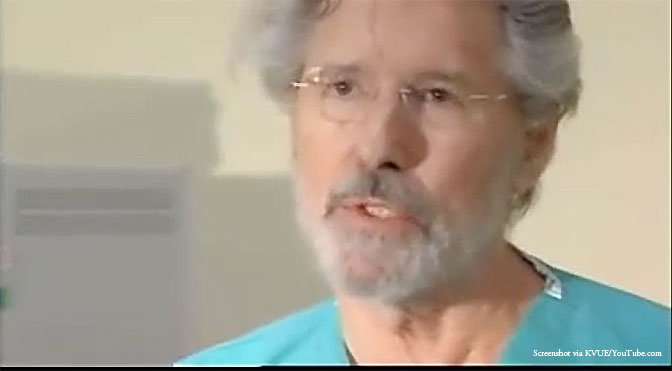 ALBUQUERQUE, New Mexico, March 30, 2016 (LifeSiteNews) — A publicly funded university is denying that it is providing medical malpractice insurance for a late-term abortionist who is also a faculty member.

But the pro-life group making the claim has exclusively told LifeSiteNews it has documentation proving the University of New Mexico (UNM) is providing Dr. Curtis Boyd the same coverage offered to all of its faculty — including volunteer faculty members like Boyd.

The skirmish is just the latest involving UNM, Boyd, and the New Mexico Alliance for Life (NMAFL). Boyd's abortion clinic — Southwestern Women's Options — and UNM are being investigated by the U.S. House special panel that is looking into the fetal harvesting industry. UNM used Boyd's abortion facility for at least two studies of aborted babies.

NMAFL is also accusing the university of not following its standards, and that of the OB-GYN industry, by having Boyd as a faculty member despite his lack of board certification.

Is the university insuring Boyd’s late-term abortion practice, or not?

In a statement exclusively provided to LifeSiteNews, a UNM spokesperson said that Boyd is not being covered “by our malpractice insurance,” clarifying that “we have over a thousand volunteer faculty members, and none of them are covered by our malpractice, or what they call risk management, administers of malpractice policies — he's not covered by that at all.”

“This is what I got back from the attorneys, that said he would absolutely not be covered by risk management for any activities at his clinic or at the UNMHSC [UNM Health Sciences Centers],” said the spokesperson.

According to documents provided by NMAFL, however, Boyd filled out paperwork for coverage in 2011. And the group showed LifeSiteNews further documentation, soon to be released, that they believe proves UNM provides existing coverage to volunteer faculty.

“NMAFL will soon release documents that show UNMHSC does provide medical malpractice coverage to UNM HSC fellows, faculty and staff who are acting within the scope of their employment,” insists Elisa Martinez, Executive Director of NMAFL. “Whenever Boyd is instructing students he is acting within the scope of his employment and covered as a state employee without compensation, per the New Mexico Tort Claims Act. If UNMHSC policy has changed regarding this, there is no indication from UNMHSC regarding this.”

“UNM's statement may be part of a continued use of clever language, since they have not been forthright regarding their partnership with Curtis Boyd from missing documents and signatures in his personnel file, to withholding information regarding his role as a 'tissue collection facilitator' to now his volunteer faculty appointment.”

The university spokesperson did not respond to a follow-up phone call about whether Boyd had been covered in the past or about the documentation referenced by Martinez. However, the pro-life advocate said that the university, and therefore taxpayers, would be liable for Boyd under state law.

“By virtue of late-term abortionist Boyd’s appointment as a University of New Mexico OB-GYN ’assistant clinical professor,’ pursuant to section 41-4-3f)(3) NMSA (2015) of the New Mexico Tort claims Act, New Mexico taxpayers are liable for Boyd for medical malpractice claims. Pursuant to that act a ‘public employee’ is a person acting on behalf of a government entity in an official capacity with or without compensation,” said Martinez.

“In Curtis Boyd’s dual role as an assistant professor and an abortionist, who is harvesting organs and tissue from aborted babies on behalf of UNMHSC (see letter from Boyd to UNM Researcher Robin Ohls) for their studies, he would be considered a ‘person acting on behalf of a government entity in an official capacity.’ Should something happen to a woman during the abortion process, taxpayers may be responsible for paying damages.”

Is Boyd's faculty status a violation of university policy?

According to the NMAFL documents, which were procured from a records request sent to the university, Boyd checked “No” on a document asking whether the abortionist was “board certified” in 2013. Boyd was going through the process of renewing his position as a volunteer member of the publicly-funded UNM faculty — a position that he shouldn't have held due to university policy, according to NMAFL.

“Late last year, UNM Health Sciences Center ended its second-trimester abortion training rotation at Boyd's facility, yet they continue to retain Boyd as an assistant clinical professor in violation of national accreditation standards and UNM policy since he is not even a board certified physician nor trained in OB-GYN,” said Martinez in a press release. “How it that Boyd, who is not a board certified physician anywhere, is not only teaching at UNM School of Medicine but receiving taxpayer-funded medical malpractice coverage as a benefit?”

According to UNM's standards for volunteer faculty, “Clinical volunteer faculty appointment at the professorial level requires the M.D. or equivalent degree. US Board certification is also required unless an exception is requested by the department chair and granted by the Dean of the SOM [School of Medicine].”

“Reasons that might justify an exception include, but are not limited to: ineligibility due to non-US training; recent graduate not yet eligible; exceptional or unique qualifications; a record of service as a Volunteer or regular member of the SOM faculty prior to the implementation of these Guidelines.”

The 2013 documentation does not have a signature from the Dean of the School of Medicine, Dr. Paul Roth. Martinez told LifeSiteNews that “throughout Boyd's file there are unsigned contracts, missing documents in his personnel file, and questions as to whether these omissions are intentional and if Boyd’s faculty appointment is actually valid.”

The university spokesperson did not respond to LifeSiteNews' attempt to clarify whether UNM violated its standards in having Boyd as a faculty member. Likewise, it is not known if Boyd's position as a volunteer faculty member has been held “prior to the implementation” of the UNM guidelines, nor why Boyd's readmission paperwork did not include a signature from Roth.

The latest version of the guidelines was issued in 2000 — Martinez told LifeSiteNews Boyd has been providing aborted baby parts to the university since 1995, but a NMAFL records request showed Boyd's faculty membership may only go back to 2010.