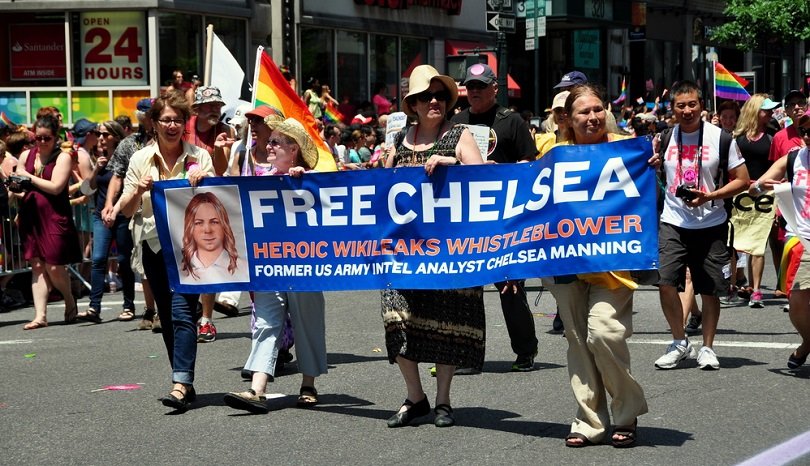 Bradley Manning, who legally changed his name to “Chelsea” last April, is serving a 35-year sentence at Fort Leavenworth military prison. Manning, who announced the day after his sentencing that he identifies as “transgender,” sued the Pentagon in September demanding he be referred to with female gender pronouns, allowed to grow his hair long and wear makeup, and begin receiving hormone treatments to make his appearance more feminine.

According to an internal Fort Leavenworth memo obtained by USA Today, prison commandant Col. Erica Nelson approved the hormone treatments on February 5, deeming them “medically appropriate and necessary,” because Manning is transgender.

However, out of concern for his safety, Manning will continue to wear the standard-issue prison uniform and be required to keep his hair cropped short like his fellow male inmates.

The decision is a reversal of policy for the Department of Defense, which stated in response to Manning’s initial request for sex-change treatments in 2013, “The Army does not provide hormone therapy or sex-reassignment surgery for gender identity disorder.”

The decision also reflects a larger trend for the military under President Barack Obama. Since Obama became Commander in Chief in 2009, the Pentagon has dropped its “Don’t Ask, Don’t Tell” policy preventing openly practicing homosexuals from joining the military, begun offering marital benefits to same-sex couples, and begun paying for sex-change hormones and counseling for transgender veterans.

Additionally, Air Force Secretary Deborah Lee James said in December that the DOD is currently re-evaluating its ban on transgender military service and will likely abolish the restriction.

That would open up the possibility of costly taxpayer-funded sex-change treatments being made available to anyone who joins the military – a potentially powerful draw for individuals experiencing gender identity disorder, since such treatments are not widely covered by private health insurance plans.

Pete Sepp, president of the National Taxpayers Union, told USA Today that given Manning’s notoriety and sizable base of support, he is more than capable of fundraising for any desired elective procedure.

“There are plenty of other ways to address this situation than to put taxpayers on the hook for it,” Sepp said.

Writing for Breitbart, conservative commentator John Hayward said he was concerned about the precedent the DOD is setting by paying for Manning’s sex change, and that the decision “captures everything wrong with modern America.”

“If you are a veteran who served your country honorably, and you have a serious medical issue, you could end up on a secret death list stashed in some bureaucrat’s drawer,” Hayward wrote, referring to last year’s Veterans Administration scandal that ultimately forced the resignation of VA Secretary Eric Shinseki. “But gender-reassignment treatments for someone who is going to spend most of the rest of his/her life in prison for exposing national security secrets? Sure, we will get right on that, just as soon as the military brass offloads responsibility for making the decision to Obama’s politicized Justice Department.”

“We can only wonder what remarkable precedents the Manning decision will set, and how much they’ll cost us,” Hayward wrote.

Army to Bradley Manning: No, we won’t pay for your sex change procedures