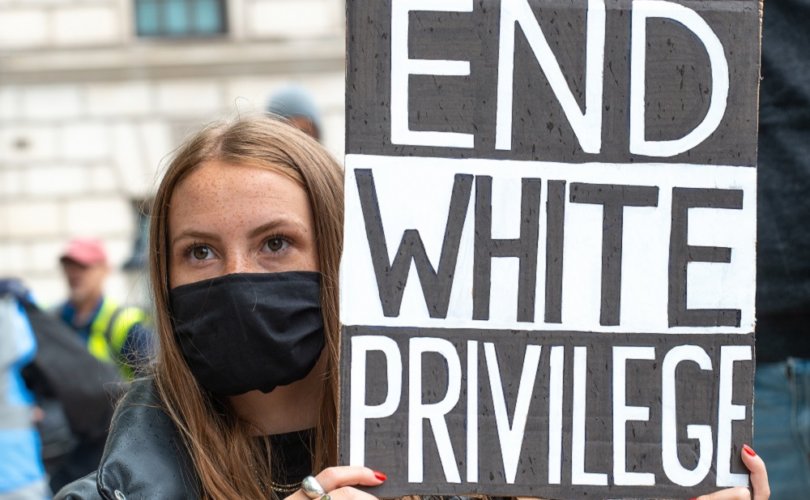 CUPERTINO, California, January 28, 2021 (LifeSiteNews) — A class of third-graders in a California elementary school were forced to undergo a lesson on “social identities,” designed to indoctrinate them on Critical Race Theory. The lesson required the children to classify their racial and sexual identities before “ranking” themselves based on their “power and privilege.”

Investigative filmmaker and writer Christopher F. Rufo revealed details of the Marxist-inspired curriculum in an article entitled “Woke Elementary,” published on his eponymous website. According to Rufo’s Twitter account, the filmmaker hopes to expose Critical Race Theory in schools and is already partly responsible for Trump issuing an executive order “banning critical race theory from the federal government.”

After discovering that Critical Race Theory was being taught at R.I. Meyerholz Elementary School through “whistleblower documents and parents familiar with the session,” Rufo explained that a third-grade teacher at the school had asked his students to create “an ‘identity map,’ listing their race, class, gender, religion, family structure, and other characteristics.”

The purpose of the exercise was to teach the children that they live in a “‘dominant culture’ of ‘white, middle class, cisgender, educated, able-bodied, Christian, English speaker[s],’ who, according to the lesson, ‘created and maintained’ this culture in order ‘to hold power and stay in power,’” Rufo said.

The teacher, taking his cues from New York Times bestseller This Book Is Antiracist, continued with his Marxist reading of society, instructing the eight-year-old students that “those with privilege have power over others” and that “folx” (touted as a more inclusive term for “folks”) “who do not benefit from their social identities, who are in the subordinate culture, have little to no privilege and power.”

To demonstrate the point, the book offers the example that “a white, cisgender man, who is able-bodied, heterosexual, considered handsome and speaks English has more privilege than a Black transgender woman.” This is to be taken as true without further evidence.

The book posits that some particular parts of a person that can be isolated and identified, such as race and class, can individually affect the privilege status of a person “because of the principle of intersectionality.” By this reckoning, “being a woman AND black” creates “greater disadvantages than being just a woman.”

Rufo notes that the group of eight-year-olds were subsequently asked to draw up a “map” of their “intersectional identities,” prioritizing “the identities that hold power and privilege.”

The third-grade class were shown a series of slides that instructed them on “social identities.” Apparently, one’s social identity has “been created by society” and it determines “[g]roups or categories that we get lumped into,” which is “sometimes not our choice.” This includes one’s family structure, which the teacher has taken to be much broader than simply mother, father, and child.

Awareness is drawn to “families” such as those with “two moms, two dads,” without making any distinction from “mom and dad” families, in an attempt to give the former categories a kind of credence or normality.

The students were expected to draft short essays, “at least one full page in writing,” in which they would assess their own “intersectionality,” including their sexual identity, and ordering themselves according to the principles of intersectionality. To help the students identify what rung of the intersectional hierarchy they fit into, the teacher’s presentation offered a “social identities” page, listing such identities as “transgenderism and non-binary sexuality.”

For any of the children who might have been confused by terms like “transgender” and “cisgender,” the teacher provided an “example identity sentence” to train them out of the habit of identifying gender “just by looking at” people. Instead, the class are taught that “gender is something you get to choose.”

“It can be the same as the sex that the doctor assigned to you at birth (cisgender), or it can be different (transgender),” the teacher continued, before asserting that “[s]ome people may not identify as either male or female, but rather as nonbinary.” All this serves to teach children that gender and sex, as categories, have no basis in objective reality, and that they are simply categories of the mind.

At the same time that these categories are regarded as mutable, whichever one someone “chooses” to identify with is then treated as though it were immutable, and said person is either advantaged or disadvantaged according to this choice.

Parents of the children who caught wind of the new curriculum “were shocked.” One parent who spoke to Rufo, wishing to remain anonymous, said the school was “basically teaching racism to my eight-year-old.” Another said that Critical Race Theory divides society between “the oppressor and the oppressed, and since these identities are inborn characteristics people cannot change, the only way to change it is via violent revolution.”

“Growing up in China, I had learned it many times,” the parent said. “The outcome is the family will be ripped apart; husband hates wife, children hate parents. I think it is already happening here.” These parents, along with a handful of others, organized to meet with the school’s senior management team to raise their concerns. The school subsequently suspended the race theory program.

Of particular note is that R.I. Meyerholz is not a “white dominant” community itself. Ninety-four percent of the school’s pupils are non-white, with a majority Asian-American population, even though the school is situated in the prosperous city of Cupertino, where the median salary is over $170,000. Meyerholz performs in the top one percent of California’s schools, despite intersectionality criteria defining the 94 percent non-white enrollment as disadvantaged.

The Asian-American community “significantly outperform all other racial groups, including whites, in terms of academic achievement, college admissions, household income, family stability, and other key measures,” Rufo explains. Asian-American parents know that “[a]ffirmative action and other critical race theory-based programs would devastate their [child’s] admissions to universities and harm their futures.”

The movement to indoctrinate America’s children into the Marxist critical race mindset is not confined to southern California. The Illinois State Board of Education recently approved a new rule called “Culturally Responsive Teaching and Leading Standards.” Should the board have the new standard ratified, teachers in Illinois will be forced to “embrace and encourage progressive viewpoints and perspectives,” including “systemic racism.”

Failure on the part of teachers to implement the new ruling will open them up to losing their license to teach in the state.

Teachers will be required to “assess how their biases … affect … how they access tools to mitigate their own behavior (racism, sexism, homophobia, unearned privilege, Eurocentrism, etc.).” They must also affirm “that there are systems in our society that create and reinforce inequities, thereby creating oppressive conditions.”

Students of a politically left-leaning persuasion stand to benefit greatly from the new mandates, as teachers are encouraged to “substitute ‘social justice work’ or ‘action civics projects’ for more traditional forms of testing when deciding on a student’s grade,” according to the National Review.

Paradoxically, and perhaps unintentionally, the new guidelines for teaching in the state of Illinois suggest that there is “not one ‘correct’ way of doing or understanding something.” However, to elect not to teach children about Critical Race Theory is soon to be a punishable offense.

The notes that the committee used to create the new teaching standards includes a section named “gaps.” In this section, the committee chillingly determines that “many teachers [are] coming out of teacher prep without understanding of CRT [critical race theory.] … [F]orce them to teach it.”