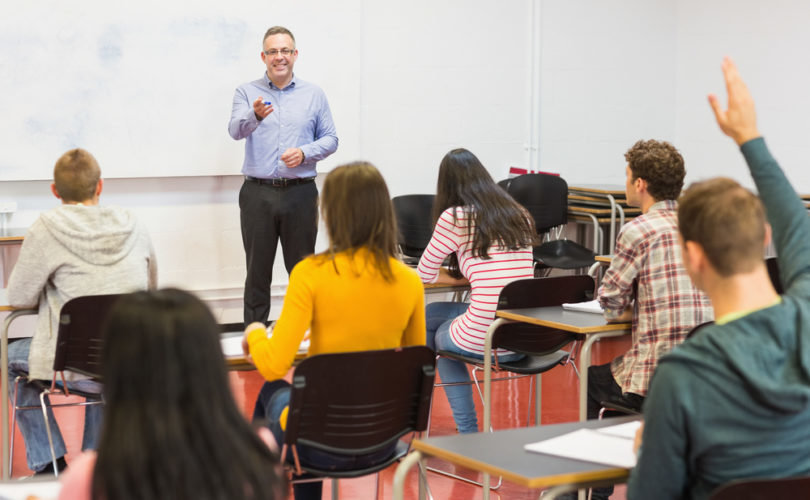 June 25, 2015 (CardinalNewmanSociety) — “Morality clauses” and high standards for Catholic school teachers are not radical new policies as portrayed by secular news media, but simply implement what the Vatican has been demanding for several decades, reveals a timely new report from The Cardinal Newman Society.

“The Vatican has consistently recognized that teachers—lay, clerical or religious—have an essential role in Catholic education and must serve as witnesses to the faith, in both word and deed,” writes Dr. Jamie Arthur, director of the Newman Society's Catholic Education Honor Roll, in her study titled, The Call to Teach: Expectations for the Catholic Educator in Magisterial Teaching.

Bishops around the United States have been putting the Vatican norms into practice with changes to employee contracts and handbooks that more explicitly describe Catholic morality and expectations that Catholic teachers model good behavior.  While these changes have been well-received in most dioceses, protests in San Francisco against Archbishop Salvatore Cordileone have promoted claims that he is out of step—even with the Catholic Church.

Dr. Arthur’s new study explodes that myth.  Her extensive review of a century of Vatican and U.S. bishop teachings on Catholic education finds that Archbishop Cordileone and bishops who are implementing high standards for teachers are simply doing what the Vatican has repeatedly endorsed.  Instead, it is the sometimes lax teacher standards of the last few decades that may have been contrary to Vatican expectations.

“Often what is perhaps fundamentally lacking among Catholics who work in a school is a clear realization of the identity of a Catholic school and the courage to follow all the consequences of its uniqueness,” warned the Vatican’s Sacred Congregation for Education in 1977, as faculties in Catholic schools shifted from primarily religious sisters and priests to lay teachers.  Dr. Arthur reports “a steady but gradual transition away from clergy and religious—now just 2.8 percent of Catholic full-time professional staff, according to the National Catholic Educational Association.”

In that 1977 document, The Catholic School, the Vatican explained clearly that lay teachers are expected to uphold the Catholic character of the Church’s schools, no less than sisters and priests:

The integration of culture and faith is mediated by the other integration of faith and life in the person of the teacher.  The nobility of the task to which teachers are called demands that, in imitation of Christ, the only Teacher, they reveal the Christian message not only by word but also by every gesture of their behavior.  This is what makes the difference between a school whose education is permeated by the Christian spirit and one in which religion is only regarded as an academic subject like any other.

Meanwhile, the Vatican has called for improved preparation of lay teachers in “secular and religious knowledge” and spiritual formation, even as studies have shown that fewer Catholics today know their faith and adhere to its key tenets, especially with regard to sexual morality.  “The formation of personnel will allow the Gospel message and the living presence of Jesus to permeate the entire life of the school community and thus be faithful to the evangelizing mission,” proposed the U.S. Conference of Catholic Bishops in 2005, in Renewing Our Commitment to Catholic Elementary and Secondary Schools in the Third Millennium.

Teacher formation is an important response to the present “educational emergency,” the Vatican said last year in its document preparing for this year’s 50th anniversary of the Vatican II declaration on Catholic education, Gravissimum Educationis.  Pope Paul VI implored in that declaration, “Intimately linked in charity to one another and to their students and endowed with an apostolic spirit, may teachers by their life as much as by their instruction bear witness to Christ, the unique Teacher.”  Last year’s planning document, Educating Today and Tomorrow: A Renewing Passion, repeated the point that Catholic teachers need to share a “specific evangelical identity” and “consistent lifestyle.”

But in addition to proper formation, dioceses need to acknowledge the contemporary “crisis of values” and ensure that they are hiring teachers who are “competent, convinced, and coherent educators” and whose model is Jesus Christ Himself.  That was among the key recommendations of the Vatican in its 1997 document, The Catholic School on the Threshold of the Third Millennium.

Dr. Arthur finds that the Church’s “multidimensional criteria for teaching in a Catholic school surpass the standards typically associated with educational credentialing,” consistent with the high moral expectations of many dioceses today.  That message is clear even in the Church’s canon law, which states, “The instruction and education in a Catholic school must be grounded in the principles of Catholic doctrine; teachers are to be outstanding in correct doctrine and integrity of life” (Canon 803).

Ensuring that teachers meet these standards will generally mean that Catholic schools strive to hire faithful Catholics to faculty positions, the U.S. bishops said in 2005.  Dioceses should strive to “recruit teachers who are practicing Catholics, who can understand and accept the teachings of the Catholic Church and the moral demands of the Gospel, and who can contribute to the achievement of the school’s Catholic identity and apostolic goals,” pronounced the U.S. bishops conference in its National Directory for Catechesis.

The U.S. bishops made a similar plea more than 30 years earlier in their statement, To Teach as Jesus Did: “The integration of religious truth and values with the rest of life is brought about in the Catholic school not only by its unique curriculum, but, more important, by the presence of teachers who express an integrated approach to learning and living in their private and professional lives.”

That is the clear intention behind diocesan efforts today to strengthen teacher employment documents and ensure that teachers are well-informed of the Church’s moral standards and vision for Catholic education.

Dr. Arthur's full study, The Call to Teach: Expectations for the Catholic Educator in Magisterial Teaching, is posted online at The Cardinal Newman Society’s website.