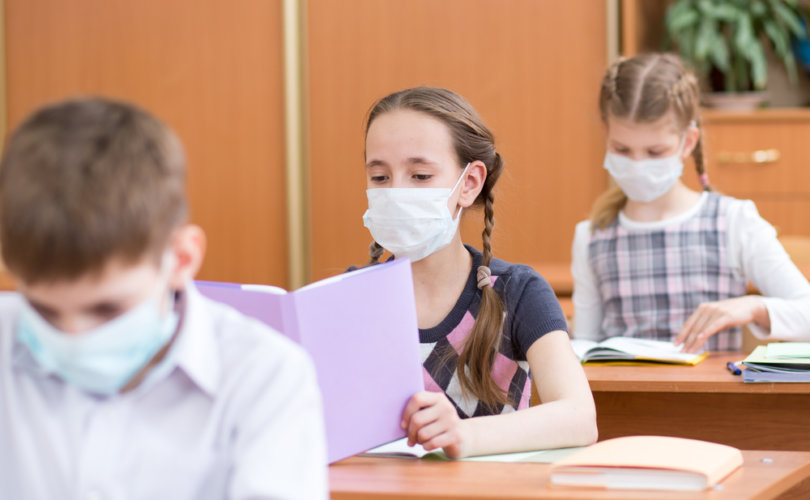 September 13, 2021 (LifeSiteNews) – A parent/teacher-led petition against mandatory masks in schools in Alberta has exceed 15,000 signatures and has the support of more than 600 teachers.

“600 Canadian teachers have signed a letter opposing mask mandates in schools. You can help us,” tweeted Alberta teacher Russell Hillier, who helped create the petition “No Mandatory Masks in Schools” that was launched at the end of August.

Hillier said he helped lead the petition as there was no “debate about masks on kids” and no consultation, “at least none with parents or teachers as far as I’ve seen.”

“I guess you could say freedom runs in the family,” Hillier noted in a recent podcast by Rebel News.

“So there’s been no transparency about what I think is a very drastic measure of putting masks on kids for seven hours a day,” Hillier said.

Hillier’s father is Independent Ontario MPP Randy Hillier, who himself has been a strong opponent to mask and COVID-19 jab mandates.

The petition is being hosted on the non-profit Alberta Institute’s website and is open to parents and educators to sign.

“As parents and teachers, we call on Alberta’s school boards to avoid repeating last year’s mistakes and reject mask mandates. Additionally, in those school districts where an announcement has already been made, we call on those districts to reverse their decision,” the petition reads.

“Finally, should school districts refuse to do so, we call on the provincial government to override the school boards’ decisions, and require them to follow the scientific evidence and expert advice.”

In an August opinion piece, Dr. Deena Hinshaw, Chief Medical Officer of Health for the province of Alberta, wrote that it was time to “live with” COVID-19.

She acknowledged that lockdowns and mandates had “consequences” on the mental health of kids and “impacts on learning and development.”

In August, the Alberta government released its new back-to-school plan that did not mandate the wearing of masks.

However, Alberta Education Minister Adriana LaGrange left it to individual school boards to implement mask policies if they so choose as she said they are it is best for them to “decide for themselves.”

In August, Hinshaw said the guidance of not mandating masks took into account the “risks of COVID-19 as well as the risks of public health measures on children’s overall health and well being.”

Many school boards in Alberta put in place for the start of the school year mask mandates for kids in all grades despite it not being mandated.

Both the public and Catholic school boards in Alberta’s largest cities of Edmonton and Calgary had mask mandates from the get-go when school began last week.

Some school boards in smaller cities that initially went without mask mandates have now implemented them as well, despite parent pushback at the school trustee level.

LifeSiteNews spoke with a teacher who works in a Catholic school in the Edmonton area and objects to masking kids in the classroom.

“I was initially happy to see that they were not going to mandate masks in schools again come the fall,” said the teacher who asked to remain anonymous.

“Kids need to see faces to interact in the classroom, but it was more than disappointing our school board decided not to follow the government’s own advice on masks. This is not a good thing and won’t help the kids in the classroom.”

The no masks in school petition reads that while it acknowledges that “under current rules, school boards are permitted to implement mandates,” Hinshaw’s own advice is that they are not “recommended.”

“The early years of education are critical to building language, pronunciation, and phonological skills,” reads a portion of the petition.

“Masks impede many of the facial cues and expressions that students rely on to build these skills. It’s simply not acceptable that these school authorities are making far-reaching decisions regarding the use of face masks without regard for the actual scientific evidence and expert advice.”

As for Hillier, he said that as a teacher he sees the harmful effects of mask wearing on kids every day, but “there’s nobody talking about it” and that is why he helped start the petition.

“So, I mean, some of the teachers, we wanted to start the conversation,” Hillier noted.

A total of 47 studies have been identified by LifeSiteNews that put into question the effectiveness of masks.

One study completed by biology professor Damian D. Guerra from the University of Louisville and longtime biochemistry professor Daniel J. Guerra found there is no connection between mask mandates and slowing the spread of COVID-19.

The study showed that not only were masks not effective in stopping the spread of the virus, but they caused many harms such as increased headaches and a decrease in “cognitive precision” along with interfering with “social learning in children.”

Kenney has also taken aim at those who have chosen to not get the COVID-19 jab as well, saying the “choices” of the unvaccinated are now “jeopardizing the healthcare system.”

This elicited a rebuke from Alberta MLA Peter Guthrie, who said that although he is “vaccinated and believes vaccines” help protect people from the virus, he supports “the rights of individuals to choose for themselves, have control over their bodies, and have the right to maintain privacy in personal health matters.”

Kenney then announced a COVID-19 vaccine incentive program. Every Albertan age 18 and over who gets a COVID-19 jab between September 3 and October 13 is eligible for a $100 prepaid debit card.

Although Kenney has said earlier that he will not introduce vaccine passports in the province, many businesses in Alberta such as the Calgary Flames and Edmonton Oilers, two teams in the National Hockey League, have announced COVID-19 jab mandates of their own for staff and spectators.

To contact your local school board in Alberta, visit: