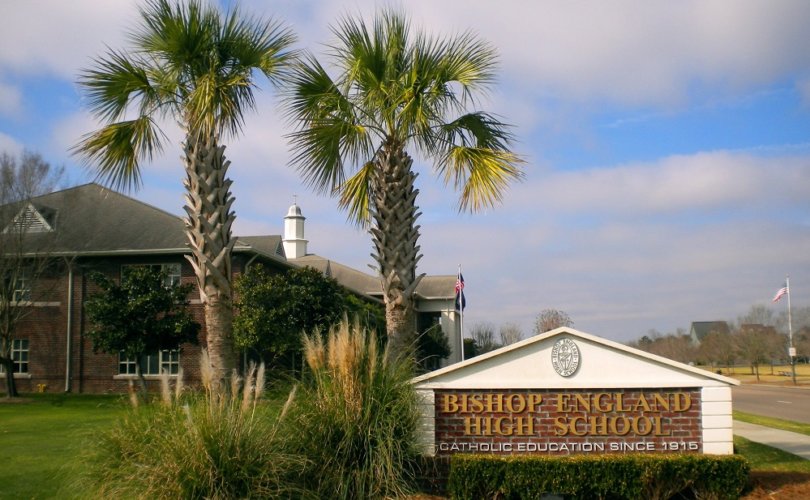 According to the lawsuit filed by Elizabeth Cox, Bishop England High School principal Patrick Finnerman wrote her on June 7 regarding a “public Facebook account which identifies you as a teacher at our school and publicly supports abortion,” which “is contrary to the mission of the Church and our school and is materially incompatible with your duties as a Catholic School teacher,” WCSC reported.

Cox had “admitted to it and, moreover, reacted in a manner leading us to conclude you would not do differently in the future,” the letter continues. Because her “public expression of disagreement with Catholic values undermines” parents’ confidence that their children will receive a “Catholic teaching and upbringing,” the school fired her and rescinded a contract offer for the next school year, which Cox says she had already accepted.

The suit alleges that her pro-abortion posts were protected political speech, that they didn’t violate anything in her teaching contract, and that firing her is a criminal violation of state law.

However, WCSC quoted from the “Duties” section of Cox’s contract, which requires teachers to agree that a “fundamental mission of the School is the intellectual and spiritual development of students according to the teachings of Jesus Christ and the Roman Catholic Church,” and that regardless of whether an individual teacher is personally Catholic, he or she “acknowledges and agrees that he or she will at all times publicly speak and act in accordance with the mission and teachings of the Roman Catholic Church, as set forth in Sacred Scripture and the Catechism of the Catholic Church.”

“Complying with such requirement is a material condition of his or her employment by the School, is one of Teacher’s essential job functions and is a Bona Fide Occupational Qualification, as defined and permitted by Title VII of the 1964 Civil Rights Act,” the contract adds.

The Catechism of the Catholic Church is unambiguous on the subject of abortion. It states that “Human life must be respected and protected absolutely from the moment of conception,” as a “human being must be recognized as having the rights of a person” from the “first moment of his existence.” Since the “first century, the Church has affirmed the moral evil of every procured abortion,” it continues. “This teaching has not changed and remains unchangeable. Direct abortion, that is to say, abortion willed either as an end or a means, is gravely contrary to the moral law.”