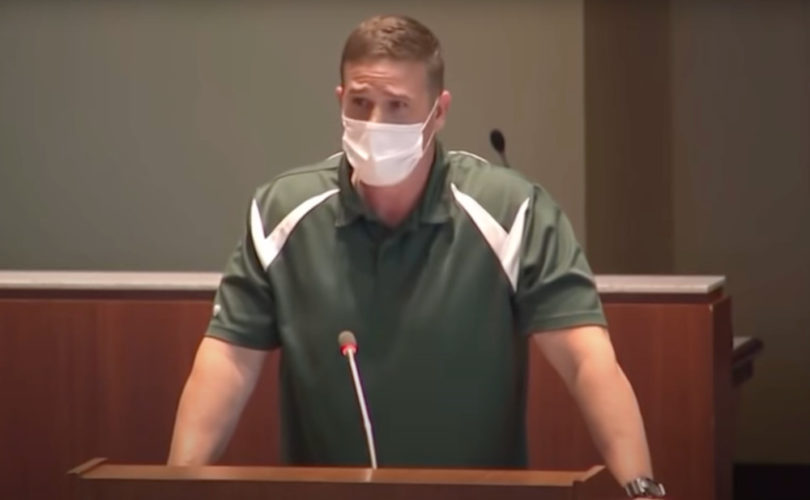 LEESBURG, Virginia, June 1, 2020 (LifeSiteNews) — A public school teacher has been placed on administrative leave for daring to inform the county school board at a public meeting that its gender affirmation policies damage children, and constitute child abuse.

At a Loudoun County, Virginia, Public School Board (LCPS) hearing last Tuesday, elementary school teacher Byron “Tanner” Cross explained he shared the board’s concern for students who struggle with gender dysphoria, but strongly disagreed with the policies and methods prescribed by the LCPS.

“I am speaking out of love for those who suffer with gender dysphoria,” said Cross. “‘60 Minutes’ this past Sunday interviewed over thirty young people who transitioned, but they felt led astray because of lack of pushback or how easy it was to make physical changes to their bodies in just three months. They are now detransitioning.”

“I love all of my students, but I will never lie to them regardless of the consequences,” continued Ross. “I’m a teacher, but I serve God first, and I will not affirm that a biological boy can be a girl and vice versa because it’s against my religion. It’s lying to a child, it’s abuse to a child, and it’s sinning against our God.”

Two days after his presentation, the LCPS Board sent Cross a letter saying he was being placed on administrative leave “pending an investigation of allegation that [he] engaged in conduct that had a disruptive impact on the operations of Leesburg Elementary School.”

Cross is now restricted from LCPS buildings and grounds and banned from attending school-sponsored activities and extracurricular activities.

Teachers forced to violate their beliefs

Attorneys with the Alliance Defending Freedom (ADF) shot off a letter to LCPS on Ross’ behalf, explaining that LCPS’ policies “would force teachers to violate their beliefs by requiring them to address students with their chosen pronouns rather than the ones consistent with their biological sex.”

“Public schools have no business compelling teachers to express ideological beliefs that they don’t hold, but it’s beyond the pale to suspend someone simply for respectfully providing their opinion at a public meeting, which is what such meetings are designed for,” said ADF Senior Counsel Tyson Langhofer, director of the ADF Center for Academic Freedom. “This isn’t just about a pronoun; this is about endorsing an ideology. The school favors certain beliefs, and it wants to force Tanner to cry uncle and endorse them as well. That’s neither legal nor constitutional, and neither was the school’s move to place Tanner on leave.”

“Immediately suspending an employee and launching an investigation for engaging in First Amendment-protected expression, creates an atmosphere of fear and is intended to send a message to Mr. Cross and other teachers that they must toe the line or face the consequences…,” the ADF letter explains. “The First Amendment does not countenance such retaliation. We demand that you immediately (1) rescind the suspension, (2) reinstate Mr. Cross so that he can return to class on Tuesday, June 1, (3) remove the suspension letter from his file, and (4) refrain from any future retaliation against protected speech.”

After defending the embattled teacher during a sermon on Sunday, Cross’ pastor was targeted by the Loudoun County Democratic Committee, demanding that he recant his “inflammatory remarks.”

“What are we to do?” asked Cornerstone Chapel Pastor Gary Hamrick during a church service on Sunday. Should we “throw our arms up and surrender and retreat and let our country and our county and our kids be taken over by progressive, liberal, Marxist ideology?”

“We need to be prepared,” continued Hamrick.

“There will be people who will attack us, label us, dismiss us, try to cancel us,” warned the pastor, “but to be passive is to be complicit.”

“The school board, some of them, are not doing their duty to protect, let alone educate, our children,” said Hamrick. “They are subjecting them to sexually explicit materials … and they are already talking about introducing [a] racially divisive curriculum. They are emotionally abusing our children by perpetuating the lie about gender confusion when they affirm pronouns that are contrary to biology, reality, and the beautiful design of God.”

“So, they need to be held accountable and it’s time to step up,” he added.

“The Loudoun County Democratic Committee was extremely disheartened to hear that one of our community’s religious leaders made inflammatory and insidious remarks about several Loudoun elected officials during a service at Cornerstone Chapel this morning,” began the LCDC statement.

“In his Sunday, May 30th sermon, Pastor Gary Hamrick took to the pulpit to accuse six Loudoun County School Board members of ‘emotional child abuse,’ opening his chapel’s atrium to political campaigning, and invoking the name of God to incite political action,” continued the LCDC.

“We are deeply concerned about the consequences of such rhetoric, having witnessed a recent rise in threats to the safety of the Loudoun School Board members. Furthermore, this irresponsible accusation of child abuse minimizes and tarnishes the people and organizations that seek to protect our children,” claimed the local Democrat organization.

“We call on Pastor Gary Hamrick to recant his allegations due to the libelous and inflammatory nature of the remarks,” demanded the LCDC, suggesting that the pastor’s remarks were “unfounded” and that “statements such as these not only hurt our community that he is meant to serve but have dangerous ramifications for the incitement of violence.”