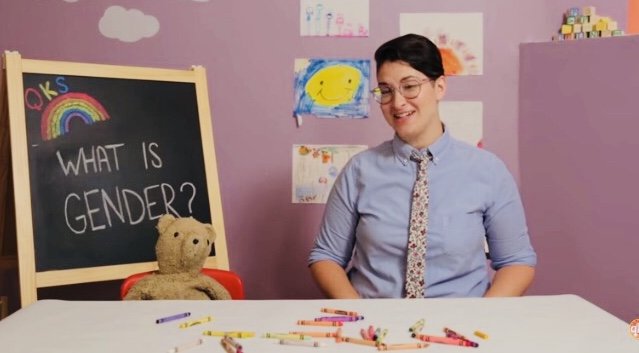 'He, She and They?!? — Gender: Queer Kid Stuff #2' video was shown to first graders at an Ottawa school.YouTube

OTTAWA, June 19, 2019 (LifeSiteNews) — The parents of a six-year-old girl who was upset after her teacher told her class “there is no such thing as boys and girls” have filed a human rights complaint against the Ottawa-Carleton District School Board, alleging the teacher discriminated by creating a “poisoned environment.”

The child’s mother, Pamela Buffone, told Barbara Kay in a story published in the Post Millennial that her daughter became increasingly distressed after her teacher showed the class a video “He, She and They?!? — Gender: Queer Kid Stuff #2” to her six-year-old students in January 2018.

The video states that “some people aren’t boys or girls,” and that there are people who do not “feel like a ‘she’ or a ‘he,’” Kay reported.

Buffone said her daughter told her the teacher, whom Kay refers to as JB, continued to teach gender ideology throughout the semester, telling her students “there is no such thing as girls and boys,” and “girls are not real and boys are not real.”

As a result, her daughter became more and more worried and upset, repeatedly asking why being a girl was “not real” and telling her parents she wanted to go to a doctor, Buffone said.

Buffone then met the teacher in March, who appeared “committed to the teaching of gender fluidity” and told the mother that gender ideology was part of the school’s policy, Kay wrote.

The teacher also said “the topic of sex change had come up for discussion” and “did not appear unduly concerned about N’s personal distress, and did nothing to affirm N’s female identity,” reported Kay.

Buffone spoke next to principal Julie Derbyshire on the phone, who told her that there was a child in the class with some gender confusion. Buffone discovered later that the parents of the child hadn’t requested lessons on gender identity but voiced concern their child not be bullied, Kay reported.

According to their human rights complaint, the “school board did not agree to communicate with parents when sensitive discussions took place, nor did they agree to issue any directive or take corrective action in order to ensure that children of female gender identity were positively affirmed,” Kay wrote.

The Buffones have since pulled their daughter from Devonshire and enrolled her in another school, where she is doing well.

They allege in their human rights complaint that the Grade 1 teacher subjected their daughter “to ongoing discrimination on the basis of gender and gender identity, by a series of lessons that denied the existence of the female gender and biological sex and undermined the value of identifying as a female.”

They also allege the principal and board “perpetuated and reinforced the discrimination that N experienced in her Grade One classroom, as neither Ms. Derbyshire nor any school board official took any corrective action to remedy it.”

The Buffones are asking the tribunal to order the school board to make sure classroom instruction does not “not devalue, deny, or undermine in any way the female gender identity.”

They want the tribunal to mandate teachers to “inform parents when lessons on gender identity will take place or have taken place, including the teaching objectives and the materials that will be or have been used for such lessons.”

They are also asking $5,000 in general damages “to compensate for injury to dignity, feelings and self-respect caused by the discrimination.”

LifeSiteNews contacted the Ottawa-Carleton District School Board for a comment but did not hear back before publication.

Buffone told Kay that this is “an important case.”

“Our government seems to have given teachers carte blanche in terms of how they teach this concept (of gender identity). If this is an example of how it can be taught, I think it’s in the public interest for the HRTO to weigh in on it,” she said.

“The principal further exacerbated the situation in that the only option provided to us was to remove our daughter from the classroom for these lessons, which is exclusionary treatment,” she said.

“N’s gender identity is — or was — seamless comfort in her biological skin. She had never questioned that comfort. Suddenly, she was told to believe that at any moment, what she believes to be real — that she is a girl — may not be true,” observed Kay.

“How very frightening that thought must be to a child who is not old enough to grasp the abstract concept of gender fluidity. Her parents are the allies here, and her educational environment is where she fails to find affirmation. Why could she not be accommodated as well as the questioning child? Why did this situation have to end up at a human rights tribunal?”

“Will the Buffones be successful at the Tribunal? I don’t know,” wrote Granic Allen in an email to supporters.

“What I do know is that this Doug Ford government had the ability to repeal the teaching of gender identity theory in classrooms — and promised they would — and instead the government repealed nothing. They lied,” she said.

“And who is paying the price for the Ford-government cowardice, and about-face? The children of Ontario.”