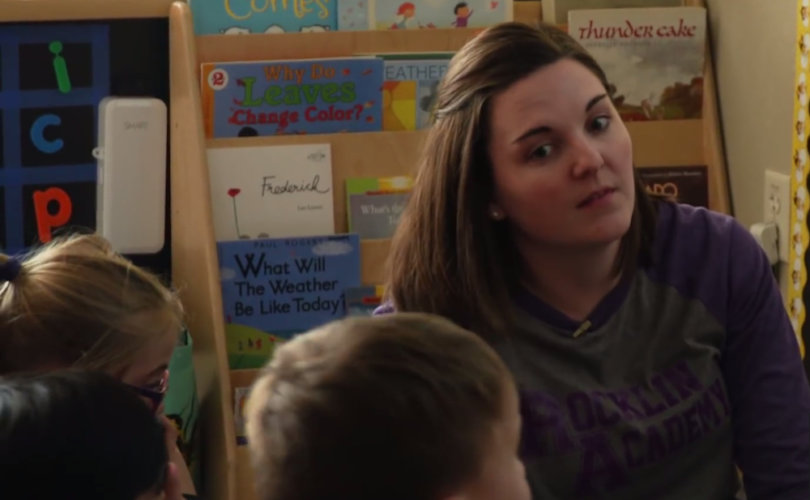 The decision of the California Charter Schools Association to name Kaelin Swaney its Teacher of the Year makes it “clear the CCSA does not stand with parents,” says Karen England, executive director of Capitol Resource Institute, a pro-family public policy group.

“The CCSA should be ashamed of themselves,” England said in a March 27 press release.

A teacher at Rocklin Academy Gateway, an elite charter school in the Sacramento suburbs, Swaney touched off a bitter controversy when she read the book “I am Jazz” to her students before explaining their classmate, a boy, was now a “girl” and would be called by a girl’s name, England recounted.

“I am Jazz” is explicitly pro-transgender and begins: “From the time she was two years old, Jazz knew that she had a girl’s brain in a boy’s body.”

Parents were not told in advance about the lesson, which took place just before the school’s summer recess in June 2017, nor that the kindergarten student was “transitioning.”

But a number of parents became outraged when their children came home upset. According to England, some of the kids were “crying, afraid they were turning into the opposite sex,” and one boy was “afraid to touch his sister’s toys in fear of becoming a girl.”

The Rocklin Academy board defended Swaney, countering that the California law requiring schools give parents notice and a chance to opt out for sex education did not apply because gender identity is not sex education. It also alleged that it was open to legal action for discrimination if it did not affirm the boy’s gender “transition.”

As a result of the dispute, some 90 children have been pulled from the school, according to a California Family Council (CFC) report.

“Charter schools are supposed to present a more parent-involved type of education,” England observed. But the Rocklin Academy board has been “shown to exclude parents, specifically those with alternative views, every step of the way.”

And it’s “baffling” the CCSA chose to honor the teacher at the center of “unheard of controversy in the family-friendly town of Rocklin,” with an award that signifies outstanding achievement, she noted.

“I do not consider traumatizing kindergartners an ‘outstanding achievement,’” England said. “Teachers should be outraged as this is an offense to all of the teachers who work so hard to respect the values of all students and parents.”

That was echoed by a parent who asked her name not be published because the community remains rent by “ugly” and bitter divisions over the incident.

“Many parents whose lives were turned upside down by this event — forced to decide whether to stay or leave the school, wondering if their rights would be respected, are very upset by this award and the school’s portrayal of this as embodying ‘integrity,’” she told LifeSiteNews in an email.

Another mother broke down in tears at a mid-February meeting of the Newcastle Elementary School Board, which oversees Rocklin Academy Gateway, when testifying how the incident left her daughter “very confused.”

She thought the Rocklin Academy board “would take my religious beliefs” into consideration, the mother said. “Instead, they swept us aside like we were trash.”

Nor did she ever get a straight answer about what happened.