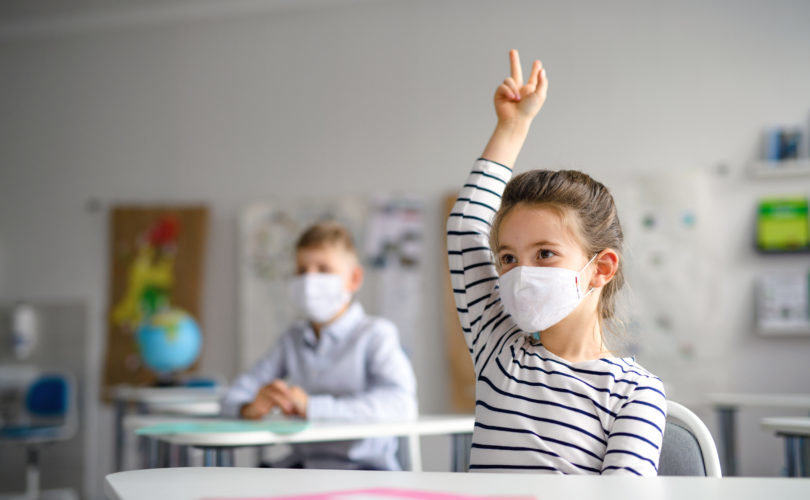 LONDON, May 10, 2021 (LifeSiteNews) – A heated battle is being waged in the U.K. over whether children should be forced to wear face coverings in schools, with Prime Minister Boris Johnson recently making a surprise intervention to stop wearing masks as of May 17.

Since the start of the COVID-19 restrictions in the U.K., masks have become a pervasive sight, gradually moving into the classrooms.

In August 2020, a primary school in Buckinghamshire became the first to mandate masks for its pupils.

Days later, and under pressure from teachers’ unions, Johnson performed yet another U–turn regarding face masks in schools, making them mandatory for schools located in areas designated with a higher risk of COVID-19 infection. Nationally, secondary schools (for ages 11–18) were also given the guidance to mandate masks as they saw fit. However, children would not be required to wear masks while stationary in the classrooms, but only in communal areas.

After the reopening of schools in March following a nationwide lockdown imposed in the new year, new guidance was given in line with the gradual easing of restrictions. Secondary school students were “strongly encouraged” to wear masks in the classroom, in addition to the existing guidance to wear them in communal areas, such as walking down corridors.

As such, mask wearing was termed as guidance, yet interpreted as law. Some councils took measures into their own hands, even advocating the use of face masks in primary schools, for which they were rebuked by the government.

However, in recently announced easing of the lockdown restrictions to take effect May 17, Johnson backtracked on the previous mask mandates. The new guidance from the Department for Education reads: “Face coverings will no longer be recommended for pupils and students in classrooms or communal areas, in all schools and FE (further education) providers. Face coverings will also no longer be recommended for staff in classrooms.”

Speaking to the Telegraph, Education Secretary Gavin Williamson attributed this easing of restrictive measures to the rollout of the experimental vaccines.

The move comes in the face of strong pressure from teaching unions, who have been lobbying the Prime Minister to maintain the practice of mask wearing in schools until June 21, the day on which Johnson had initially predicted COVID restrictions could be over.

Multiple teacher’s unions, National Education Union (NEU), the NASUWT teaching union, Unite, Unison and GMB, penned a letter to Johnson, claiming that masks were “an essential part of the wider system of control in schools,” and demanding they be kept in use at least until June.

“To strip these necessary protections, when there are already too few mitigation measures in schools, and when rates of Covid-19 are still significant would have consequences for the health of our children and their parents as well as their communities,” read the letter.

Professor Martin McKee, from the London School of Hygiene and Tropical Medicine, added that he was concerned “there’s no room for complacency,” and removing masks would be removing “an important part of our armamentarium in response to Covid.”

The unions' panic came despite official statistics giving no cause for such concern. Following the March return of pupils to their classrooms, only 0.05 percent of students were found to have had a positive test result using COVID PCR tests, which have found to be “useless” and based on “flawed science.”

Meanwhile, secondary pupils were testing positive at a rate of .33 percent compared with more than 1.2 percent in December.

The call for maintaining the mask-wearing mandate in schools came as a new study has documented the “horrific” impact the lockdown restrictions have had upon U.K. schoolchildren. Of more than 2,600 schools surveyed, a firm majority recorded drops in pupil’s skills. A total of 84 percent of schools thought that their pupils had become less fit, and 66 percent reported that pupils had gained excessive weight.

In fact, a study from last July, after only one national lockdown, revealed a similar striking trend in the negative effect upon schoolchildren, particularly those in primary grades. The scoring gap between the lowest and highest scoring students in Year 3 rose by 52 percent. For those in Year 5, the change was a 39 percent increase.

Secondary school students were less impacted, yet the gaps between the lowest and highest scorers in Years 7 and 9 still rose by 13 percent.

Reacting to the recent news from the government regarding face masks, radio show host Julia Hartley-Brewer wrote, “Finally, the PM gets rid of the face masks in our children’s schools – not just in the classrooms but in all communal areas too. Thank god for sanity returning at long last.”

Headed by a number of academics and public figures, a campaign has also been underway defending the rights of pupils and petitioning Johnson to remove the mask requirement in schools. Us for Them has been urging members of the public to continue writing Johnson and Williamson in order to ensure that masks do not make a comeback in the start of the autumn term.