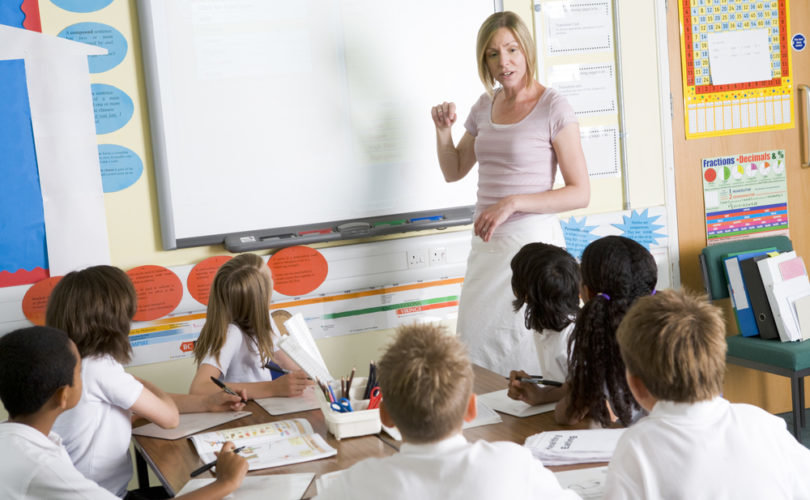 TORONTO, July 13, 2017 (LifeSiteNews) — Campaign Life Coalition is raising the alarm that parental rights are under new attack, this time by school boards defending “transgenderism” and gender confusion in students of any age behind their parents’ back.

A number of Ontario school boards have quietly implemented directives that a school not tell parents when a child asks to “transition” to another gender at school, even in kindergarten, Jack Fonseca, senior political strategist for Campaign Life, told LifeSiteNews.

“So you can have a five-year-old boy or seven-year-old girl asking a teacher about switching genders, or that they want to be another gender, and the board says that teacher can’t tell the parents,” he said.

“What a tyrannical violation of parental rights! Worse still, it amounts to institutional child abuse on the part of schools.”

Children are “already subjected to gender identity theory in schools at too young an age, which can actually cause them to believe they might be transgender by producing sexual confusion that didn’t exist before,” he noted.

“These policies will leave young kids without the protection of their parents against gender theory ideologues,” added Fonseca.

“The harm to a child could be irreparable, including increased risk for depression and suicide.”

Board: Teachers “shall not” tell parents

At least five Ontario public school boards have policies or procedures accommodating transgender students that explicitly direct the school not to tell parents a child has “transitioned” to another gender at school, without the child’s express permission.

Some students who identify as transgender are not openly so at home because of safety and/or other reasons. A school shall not disclose a student’s gender status to the student’s parent(s)/guardian(s) without the student’s explicit prior consent (emphasis added).

The other boards’ directives follow the Waterloo policy almost verbatim, but substitute “should never disclose” for “shall not.”

These directives, except for the WRDSB and TVDSB, add: “This is true regardless of the age of the student.”

“There is no age limit on making an accommodation request, and young students have the same rights to privacy and to have accommodations made on their behalf with or without their guardians' knowledge” (emphasis added).

An elementary school teacher who spoke to LifeSiteNews on the condition of anonymity confirmed her board’s parental non-disclosure directive applies from kindergarten to Grade 12.

“We could be talking about a six-year-old here,” the educator told LifeSiteNews.

“Even if it’s a 14- or 15-year-old, the parent has the right to know what is happening with their child!”

Board: We honor child’s direction

But Peter Rubenschuh, superintendent of student achievement and well-being for Waterloo Region District School Board, said his board’s procedure is about safety and honouring a child’s choice.

“Gender identity is certainly something that we certainly take at presenting value and that we honour,” he told LifeSiteNews.

Rubenschuh denied the board acts on the presumption that telling the parents will put the child at risk, but defended the policy for that reason.

“I mean, the reality is that we also have many lived experiences of students who identify or become public with their gender identity, and are subsequently dismissed from the home,” he said.

Rubenschuh said his board’s procedure applies from kindergarten to Grade 12.

“The student will identify publicly when they’re ready to do so and we honour that.”

He dismissed the board’s stated safety concerns as “fear-mongering,” adding: “This excuse doesn’t pass the sniff test. It doesn’t sound at all like what real parents would do, who overwhelmingly love their children.”

Fonseca believes the underlying motive behind the school boards’ directive to exclude parents is to “indoctrinate the next generation with state ideology.”

That ideology, he contends, includes inculcating children from an early age in a view of human sexuality completely at odds with traditional morality.

Indeed, the Liberal sex-ed curriculum, rolled out in 2015, entrenches gender ideology as fact, teaching children by the Grade 8 there are six genders rather than two biological sexes.

The teacher who spoke to LifeSiteNews concurred her board claimed safety as the reason for its procedure, but the document “clearly follows the agenda of pushing kids through this transitioning.”

The “major assumption is that transitioning is in the child’s best interest, and I don’t agree,” the teacher said.

“My sense with my colleagues is that there is concern with what they perceive as going behind parents’ backs, although the directive is very clear that we’re being told not to,” she added.

“And that the reason is it’s in the child’s best interest not to.”

She says she would rather be free to work with families, or refer them as a unit to community supports.

“By maintaining secrecy, the school boards are underscoring the shame that the child may already be feeling. Assisting a child to open up the dialogue with their parents empowers the child,” she told LifeSiteNews.

“With the support of caring school staff, children can begin the conversation that needs to happen with their parents.”

Indeed, when it comes to safety, the teacher says excluding parents is what will put the child at risk.

“It’s so important to acknowledge that the parents are the primary and most significant source of support for a child,” she said. “If there is a concern with a child, the teacher should be talking to the parents.”

A student “questioning his/her gender is a child in serious emotional pain, a child at significant heightened risk of suicide, depression, self-harm, drug use, etc,” the teacher said.

Parents kept in the dark will be “unable to be on their guard for these risk factors.”

Not to mention the “emotional fatigue and trauma of a child who is living two lives — at school presenting one gender, at home another” or the “confusion of a parent who knows something ‘isn't right’ but can’t get to the bottom of it and hits endless brick walls in talking to their child and/or the school.”

Boards’ directives against the law

And by directing non-disclosure to parents, boards are actually asking teachers to “do an unlawful and unconstitutional act,” according to lawyer Geoff Cauchi.

Parents have a number of common law custodial rights that have been “elevated to constitutional rights” by various court decisions since the 1982 Charter came into force, he told LifeSiteNews.

These include directing and controlling the education and medical treatment of their dependent children.

The “accepted rationale” for recognizing these rights is that it’s “irrational and fundamentally unfair” for the state to impede parents’ ability to do what it legally obliges them to do, he said.

“Whoever has the responsibility must also have the power.”

And under the Family Law Act, Ontario parents have the legal duty to support their children up to age 18, or age 16, if the child then voluntarily withdraws from the home.

So a school board’s “authority over a child has been delegated to them by the child’s parents” according to common law, Cauchi said.

As the parent’s agent, the school and the teachers have a “legal duty” to tell parents all they “reasonably” need to know to meet their support obligations “even if the child says he or she does not want the parent to be told,” he said.

A child “has no general right to privacy as between himself or herself and the custodial parent.”

Do kids belong to parents …

Ontario school boards also have no “statutory mandate” to assess a child’s capacity to give “valid and informed instruction to withhold information from the parent,” nor do teachers have any “legal status or expertise” to assess this, Cauchi noted.

If a school board has “reasonable grounds to believe that a child is ‘in need of protection’ under the provisions of the Child and Family Services Act,” its legal options are limited, he said.

It must either refer the matter to the local Children’s Aid Society, or “somehow” get a court order allowing it “to withhold the information from the custodial parent.”

Ontario law requires CAS decisions be supervised by the court and parents allowed to challenge those decisions in court.

“Indeed, to sum up, a state agent is legally bound to go to court and prove you’re an unfit parent before it can intervene in this way,” Cauchi told LifeSiteNews.

“In the absence of a court order, that means state agents can’t unilaterally agree to be complicit in the dependent child’s efforts to keep secrets from his or her custodial parent.”

The teacher who spoke with LifeSiteNews agrees.

“When there is a concern about a child, we talk with the child’s home about what is happening. If we are concerned that doing so would impact the child’s safety, then we talk to the Children’s Aid Society. Those are the two options.”

Or do they belong to the state …

“I don’t understand,” he said, when LifeSiteNews observed parents need to know what’s happening with their children at school.

“Under what premise would we offer that information if we know it’s going to create a vulnerability for that child?” he said.

“The student will give us the direction when they are comfortable and ready to disclose,” Rubenschuh added.

“I would argue that this is ideology,” countered Cauchi.

“Their attitude is that the children belong to the state and they don’t belong to the parents. In a free democratic society, that doesn’t happen.”

But given that Premier Kathleen Wynne’s Liberal government is pushing the LGBTQ agenda and gender ideology in schools, it’s likely such parental non-disclosure directives will increase.

Indeed, Rubenschuh says there are “probably a dozen” boards with similar directives.

Some were put in place shortly after the Ontario Human Rights Code added “gender identity and expression” as prohibited grounds for discrimination in 2012.

And Ontario’s Bill 13, or Accepting Schools Act, passed in 2012, mandates that “schools ultimately have the duty to provide a safe and secure environment for students,” Rubenschuh said.

Cauchi says the policies should be fought in court.

“It has to be challenged,” he told LifeSiteNews.

“The education authorities are ignoring the fact that until the child reaches the age of 16, the parents have legal custody of their children.”

Most important, parents “need to be aware that their rights have been rolled back,” the teacher told LifeSiteNews.

“Every parent has to be thinking seriously about their own child and whether public school is a good fit for them, especially if the child is at risk.”

“Don’t believe these Marxist educrats give a damn about child safety. They don’t,” he said.  “Their real goal is to eradicate the Judeo-Christian worldview from society, and children are merely collateral damage in their war.”

And “like Goebbels and Stalin, they understand the key to indoctrinating the next generation in the state’s ideology is to get them young, using state-run schools.”

Indeed, in response, Campaign Life has launched a petition to defend parental rights, he said.

It asks school trustees to “repeal or oppose this tyrannical breach of parents’ rights, lest they invite a mass exodus from the public education system.”

Moreover, “like all evil policies, this one will spread like a cancer to all provinces and territories until it engulfs every school board,” warned Fonseca.

For this reason, he’s urging all concerned Canadians to sign the petition, which can be found here.