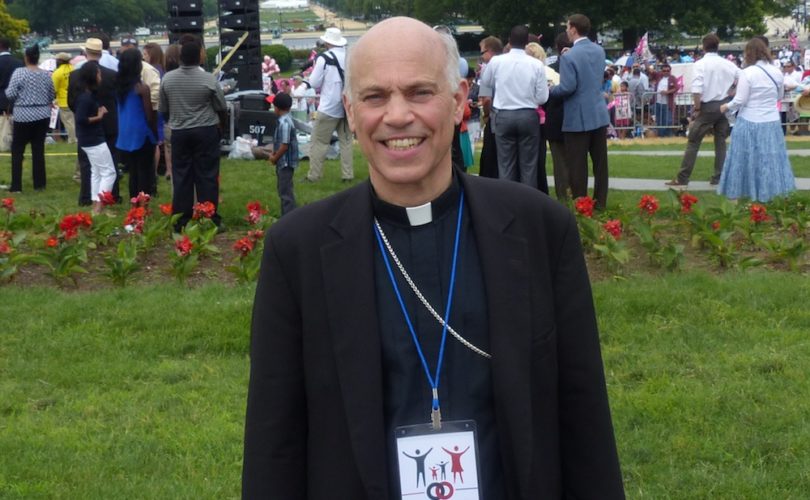 Archbishop Salvatore Cordileone is 'making more explicit what our schools are called to uphold, even in the face of social pressure,' he says.Dustin Siggins / LifeSiteNews.com

SAN FRANCISCO, CA, February 11, 2015 (LifeSiteNews.com) — The Catholic archbishop of San Francisco is facing resistance to his efforts to protect the students in diocesan high schools from the secular wave of society, including from some teachers, parents, and students.

Archbishop Salvatore Cordileone addressed the high school teachers of the archdiocese February 6 in conjunction with impending changes for faculty handbooks and proposed contract language for teachers that confirms the long-established expectation they uphold Church teaching in their lives and not publicly contradict Church morals.

The clarifications for diocesan school faculty and staff come at the same time the archbishop is launching an assessment of the Catholic identity of San Francisco’s 14 area Catholic schools.

The archbishop’s efforts are drawing some strong opposition.

“I chose to send my children to Catholic schools because I wanted their education to be grounded in love, compassion, and a strong sense of social justice,” Sacred Heart Cathedral Preparatory parent Peggy O'Grady told Fox News. “This effort by the archbishop will do the opposite, and would run counter to all I believe and value in a Catholic education.”

Archbishop Cordileone’s insistence that Catholic schools uphold Church teaching on matters such as contraception, abortion, and marriage are at the heart of the disagreement over his effort to ensure Catholic identity in San Francisco Catholic high schools.

Media were not allowed in the February 6 meeting with school staff, but someone made a recording of the question and answer session, according to the Boston Globe’s Catholic website, Crux.

Archbishop Cordileone is said to have confirmed on the recording that escorting a woman into an abortion clinic, handing out contraception to students, or being a member of a white supremacist group were examples of possible grounds for dismissal, as well as taking part in a homosexual “marriage.”

It’s about “making more explicit what our schools are called to uphold, even in the face of social pressure,” Archbishop Cordileone said.

“If that language remains, I believe there will be a mass exodus of educators,” a teacher said, speaking anonymously of the clarification of Church doctrine being added to staff handbooks and new contract language. “More than 80 percent of the people in that room were wearing all black in solidarity with each other, to say, ‘This is not our Catholic school education.’”

While Archbishop Cordileone addressed the faculty on Friday, some parents and students protested outside.

“We want them to know they’re not alone in this,” said Mairead Ahlbach, a senior from Sacred Heart Cathedral Preparatory. “We don’t want a culture of fear at school.”

“These are my kids,” said another teacher, tearful from the students protesting on the teachers’ behalf. “These are the kids we are supposed to protect.”

Archbishop Cordileone has drawn liberal ire for his ardent defense of the Church in the past, including publicly correcting House Minority Leader Nancy Pelosi for her support for abortion and her criticism of his attendance at the national March for Marriage.

Labor unions represent the teachers at four of the 14 high schools, and union leadership is bothered by the contract language proposed by Archbishop Cordileone.

In clarifying the expectation that faculty and staff uphold Church teaching in their lives it classifies them as ministers of the Church, and this would have implications for the unions in bargaining and representing faculty due to the Supreme Court’s exemption of churches and religious schools from federal anti-discrimination laws for employees working in ministerial roles.

The archdiocese announced the three proposed new clauses for teacher contracts in the four diocesan schools last week. They will take effect with the 2015-16 school year.

The clauses clarify that Catholic schools “exist to affirm and proclaim the Gospel of Jesus Christ as held and taught by his Catholic Church.”

The archdiocese is also adding thorough statements of Catholic teaching on sexual morality and religious practice, drawn directly from the Catechism of the Catholic Church, to faculty and staff handbooks.

Archbishop Cordileone explained to teachers in a letter that he sees a need to provide them more clarity on the Catholic faith. He emphasized the document’s intent is not to target anyone, and also that it does not introduce anything new into their contract or handbook.

“We need to face the current reality in society and the Church honestly, seriously and frankly,” the archbishop said. “Many people have opinions directly contrary to the natural moral law and the teaching of the Catholic Church.”

“Furthermore,” he continued, “many Catholics themselves have beliefs at variance with Church teaching. This is simply a reality of our modern society.”

Archbishop Cordileone attributed this to pressure from today’s culture to conform to an agenda at odds with the Christian understanding of the human person and God’s purpose in creation.

“This problem in society in general is already serious enough, but when people in Catholic institutions endorse such views it creates a toxic confusion about our fundamental values among both students and others in society at large,” he said.

“Dissenting from Catholic teaching or the natural moral law in a Catholic high school does not promote holiness, virtue and evangelization,” he said.

Speaking about the assessments of diocesan schools when they were announced, the archbishop spoke of the collapse in catechesis when passing on the faith to young people. “They should be the leaders of the Church,” he said. “But if we don’t give them good reasons to be Catholic, they won’t play that role.”

“We hear stories of children going through 12 years of Catholic education and then they leave the Church,” he told the National Catholic Register. “Somehow, we are not instilling a sense of Catholic identity in many of our students.”

The archbishop has been accused in numerous quarters of opposing Pope Francis’ direction for the Church. For example, a San Francisco Chronicle article said his reforms of diocesan schools “run counter to the pope’s message.”

“I can’t imagine that the pope wouldn’t be outraged by this,” parent Patty O’Grady told the Chronicle. “I’ve never seen anything like this in the church in all my days.”

Boston College professor of Moral Theology Father James Bretzke also told the newspaper that Archbishop Cordileone “does not have his finger up to the ecclesial wind.”

Despite of the pushback on Archbishop Cordileone’s efforts to sustain Catholic identity in the schools of the archdiocese he does have support.

“The archbishop is a man of great courage,” Ursula Apel of Alameda, California, told Crux, adding that he has thousands and thousands of silent supporters. “Can you imagine how difficult it is to be the archbishop of San Francisco when there is so much controversy?”