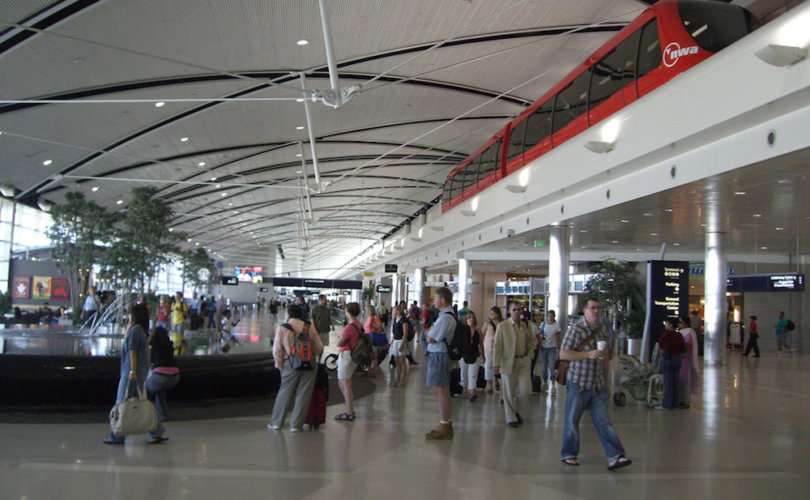 April 23, 2020 (LifeSiteNews) – As nations debate when and how to lift the restrictions on public activity imposed to halt the spread of COVID-19, a Taiwanese company has proposed a technological solution to distinguishing the healthy from the infectious, though it is likely to raise privacy concerns.

The Taiwan-based ioNetworks is partnering with the technology company DFI to develop a “smart thermal control” system that would scan people at the entrances of public places such as airports for body temperature and facial recognition, which could easily identify people with fevers, barring them from entry, according to DFI’s press release.

DFI elaborates that the “centralized smart thermal control system eliminates the current over-dependence on human labor in rerouting the traffic flow, guarding entrances, and screening the feverish … snapshots of the feverish can be instantly marked with temperature readings and stored in the database by the system, which in the meantime also alerts the staff to take actions.”

This “means that no one has to be placed in front of the monitor to manually identify anyone with high body temperatures, and no one will have to tediously fast forward through the CCTV footage to track down a possible breach.”

The company toutes the ability to quickly and accurately identify potential carriers as especially useful in “major transportation facilities” with a large number of people coming and going, often in a hurry.

“The smart system does not solely assist the pandemic control as a short-term goal, but it aims to pave the way to a smart city in the long run,” the press release promises.

While such technology would undoubtedly be useful both for cutting off infections and giving the healthy peace of mind as they go about their lives, it is also likely to raise privacy concerns if implemented, particularly in light of the broad range of personal restrictions governments have already imposed on their citizens, and prominent figures such as Trump administration adviser Dr. Anthony Fauci entertaining proposals such as forcing Americans to carry “certificates of immunity.”

As of April 23, the United States has seen an estimated 49,651 COVID-19 deaths out of 876,174 known cases, although mounting evidence suggests far more of the public has contracted and recovered from the virus than the official count indicates.

“In New York City, an epicenter of the pandemic with more than one-third of all U.S. deaths, the rate of death for people 18 to 45 years old is 0.01 percent, or 11 per 100,000 in the population,” wrote Dr. Scott Atlas, former chief of neuroradiology at Stanford University Medical Center. “On the other hand, people aged 75 and over have a death rate 80 times that. For people under 18 years old, the rate of death is zero per 100,000.”

He concludes that the “appropriate policy, based on fundamental biology and the evidence already in hand, is to institute a more focused strategy like some outlined in the first place: Strictly protect the known vulnerable, self-isolate the mildly sick and open most workplaces and small businesses with some prudent large-group precautions. This would allow the essential socializing to generate immunity among those with minimal risk of serious consequence, while saving lives, preventing overcrowding of hospitals and limiting the enormous harms compounded by continued total isolation.”