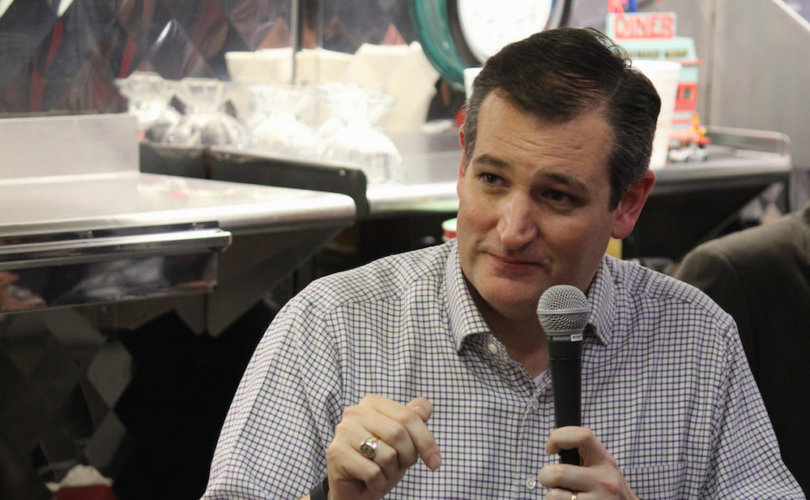 BUFFALO, New York, April 15, 2016 (LifeSiteNews) – Senator Ted Cruz came out in favor of a North Carolina law prohibiting biological males from using the restrooms, showers, and changing facilities of the opposite biological sex during a town hall meeting in Buffalo last night.

Cruz was asked to comment on a law signed by North Carolina Governor Pat McCrory that restricts intimate settings based on biology, rather than “gender identity.” The law has come under intense fire from entertainers, filmmakers, and a powerful coalition of corporate interests threatening to boycott the state until it is reversed.

The senator, a former solicitor general of Texas, told NBC's Chuck Todd that, under the constitutional doctrine of federalism, these and other vital decisions are left to the states.

“I'm a constitutionalist, and the state has the power to pass their own laws to make a determination that men should not being going to the bathroom with little girls,” he said.

But he added that his opposition is rooted, not just in the Founding Fathers, but in his own role as a father.

“As the father of daughters, I'm not terribly excited about men being able to go alone into a bathroom with my daughters,” he said. “And I think that is a perfectly reasonable determination for the people to make.”

Gov. McCrory called a special session of the state legislature after Charlotte passed a city ordinance requiring all public accommodations to make sex-segregated areas open to anyone who identifies as a member of that sex, regardless of his or her biology, or be found guilty of discrimination.

Such ordinances have passed across the country, touching off a backlash among concerned parents. Last November, the Houston Equal Rights Ordinance was struck down in a landslide by voters in the citywide referendum.

However, the most determined advocate for opening intimate facilities to members of the opposite biological sex is the Obama administration, which has sued or threatened to sue numerous school districts and educational facilities for refusing to comply with its transgender policy.

“The Obama Education Department is going against a junior high, insisting that the junior high must allow a teenage boy to shower with teenage girls,” Sen. Cruz said last night. “Now, that's just nuts. I mean, that's not a reasonable position.”

Although no civil rights legislation empowers the federal government to prosecute individuals or businesses on the basis of gender identity bias, the Obama administration announced that it will treat any transgender discrimination as an act of sexual discrimination, which is covered by federal law.

Cruz, who is trailing in the polls before next Tuesday's New York primary, echoed his rival, Donald Trump, blaming the national feeding frenzy over lavatories on “the political correctness we have embraced.”