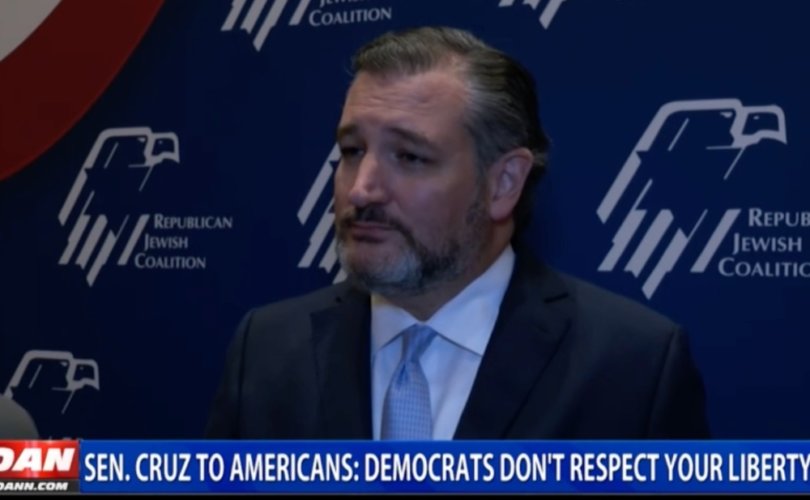 (LifeSiteNews) — Days after the Biden administration’s COVID-19 jab mandate for large businesses was stalled by a federal court, Texas Republican Senator Ted Cruz said he believes President Biden knows the rule won’t pass judicial muster but is “cynically counting that some employers and some employees will just obey” the mandate while it takes “months and years for the litigation to sort itself out.”

“The Biden vaccine mandates are patently illegal,” Sen. Cruz told a One America News reporter at the Republican Jewish Coalition in Las Vegas, Nevada on Monday. “They are an abuse of power.”

Cruz’s comments come as the Biden administration’s attempt to use the Occupational Safety and Health Administration (OSHA) to force employers with more than 100 employees to get the COVID-19 shot or submit to weekly testing has hit a major snag.

The mandate was halted Saturday by the U.S. Court of Appeals for the Fifth Circuit just two days after the 490-page rule was published, with the three-judge panel declaring that the petitions from the states and businesses that filed suit against the government “give cause to believe there are grave statutory and constitutional issues with the Mandate.”

If upheld by the courts, the OSHA rule would impact some 84 million Americans and punish noncompliant businesses with fines of up to $136,532 per offense for repeat violators, massive penalties that could bankrupt most businesses.

The U.S. Department of Labor has also suggested it may expand the requirement to include businesses with fewer than 100 employees, potentially impacting nearly every adult American and putting small businesses at serious risk of being shut down.

On Monday, the Biden administration told businesses they should move forward with requiring workers to take COVID-19 injections despite the federal court’s stay of the OSHA mandate.

White House Deputy Press Secretary Karine Jean-Pierre said “people should not wait” for the courts to rule on the constitutionality of the mandate, adding that businesses “should continue to move forward and make sure they’re getting their workplace vaccinated.”

The @WhiteHouse called on employers to adhere to the Biden administration’s #VaccineMandate for private businesses, after an appeals court temporarily blocked it on Nov. 6. https://t.co/Uj3usWTMyk

Cruz accused President Joe Biden and the Democrats of being “so arrogant that they believe they can tell you what health care decisions you should make,” with Cruz arguing that “you ought to be able to make the decisions about your own healthcare in consultation with your doctor.”

The father of two also decried the efforts of Democrats “trying to force schoolkids to get vaccinated,” which he called “a complete abuse of power.”

“In fact just this week, I introduced legislation in the senate to ban any government jurisdiction from forcing kids to get vaccinated” for the coronavirus, he said.

Introduced by Cruz on Friday, the Parental Rights Protection Act would bar the federal government and public schools from forcing children to be vaccinated against COVID-19.

“My view on the COVID-19 vaccine has remained clear: no mandates of any kind,” the Texas lawmaker said in announcing the bill, arguing that the Biden administration has “repeatedly ignored medical privacy rights and personal liberty by pushing unlawful and burdensome vaccine mandates on American businesses, and now they are preparing to push a mandate on kids by pressuring parents — all without taking into account relative risk or the benefits of natural immunity.”

Senator Ted Cruz has introduced a bill that would block children from COVID vaccine mandates.

Parents should ALWAYS have the right to choose what is best for their child, not the government.

Ted Cruz is standing up for parents AND children.

In his comments Monday Cruz reiterated that he is personally “pro-vaccine” and that he and his family have all taken the experimental COVID-19 jabs, but stressed the importance of “individual liberty” and “individual responsibility.”

The senator also argued that the Biden administration’s shift to imposing heavy-handed injection mandates, even after Biden said in December he would not make the shots mandatory, is a “cynical” move intended to draw attention away from the chaotic drawdown of U.S. troops in Afghanistan in August which led to the rapid takeover of the region by the Taliban and the tragic killing of 13 American servicemembers.

“Remember when Joe Biden rolled this out, it was when Afghanistan was such a disaster,” Cruz said. “His failure, his surrender, his withdrawal was so bad they were desperate to change the topic, and they knew that by ordering people to get vaccinated everyone would start talking about that instead.”

Cruz said he believes Americans have had enough of the “arrogant” and “condescending” Democrat policies, and pointed to the Virginia elections last week as a bellwether for American sentiments regarding politics and individual liberty.

“Well, I’ll tell you the elections this week were a big damn deal. And I gotta tell you, in Washington, the Democrats are scared out of their minds,” he said.

According to Cruz, the Republican sweep of the Virginia elections last week in a race dominated by issues surrounding parents’ rights and school board policies, was “a victory of parents” and signals ordinary Americans are tired of the “tyranny” of the political left.

“The moms and dads… came out and said: ‘enough of this tyranny. Enough of these arrogant, condescending Leftists in school boards and in the Biden administration,’” he said.

“I think people are tired of this cynical politics we see from Joe Biden and Kamala Harris,” the Texas senator stated. “They’re ready to get back to defending everyone’s individual liberty.”