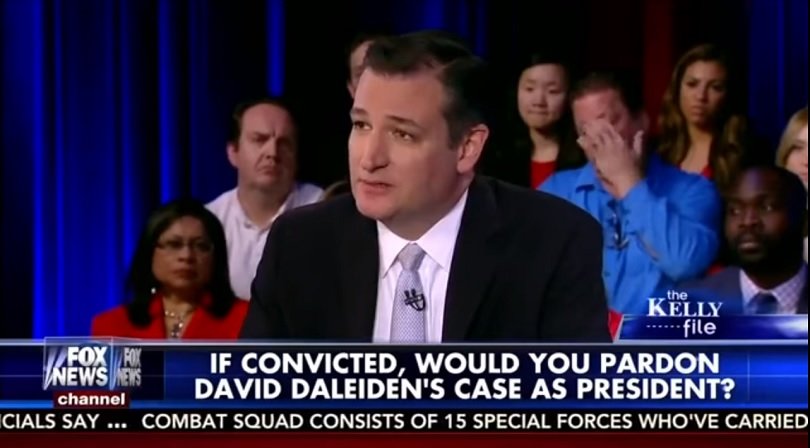 The senator and presidential candidate made that promise during a Republican town hall meeting hosted by Fox News last night.

“If David Daleiden's case became a federal one, would you pardon him?” a female from the audience asked.

“The answer is yes,” Cruz replied.

The woman silently lipped the words “thank you” after hearing his answer.

Sen. Cruz said he felt a personal connection to the case, because the indictments happened in his hometown of Houston.

“I was deeply dismayed and disappointed to see the Harris County district attorney bringing criminal charges against someone who went undercover to expose what appears to be criminal conduct by Planned Parenthood,” Cruz said. “I think he performed an incredible public service.”

On January 25, the Harris County grand jury indicted Daleiden and Sandra Merritt for a misdemeanor charge of attempting to purchase human body parts and a felony for using false identification. If convicted, they could face up to 20 years in a Texas prison.

Their 30-month-long undercover investigation on behalf of the Center for Medical Progress caught the director of research for Planned Parenthood Gulf Coast, Melissa Farrell, seemingly admitting to illegally profiting from the sale of aborted human organs and changing the abortion procedure without a medical necessity, in order to get “the best specimens.”

PPGC is headquartered in Houston, but the grand jury did not indict Farrell of her other alleged co-conspirators.

“It appears Planned Parenthood is a national criminal enterprise committing multiple felonies,” Sen. Cruz said on Wednesday night. “I’ve pledged, if I’m elected president, on the very first day in office, I intend to instruct the U.S. Department of Justice to open an investigation into Planned Parenthood and to prosecute any and all criminal conduct by that organization.”

More than 122,000 people have signed LifeSiteNews' petition asking District Attorney Devon Anderson to drop all charges against Daleiden and Merritt.

Sen. Cruz won the Iowa caucus but has since finished lower in the polls, coming in just behind Sen. Marco Rubio in South Carolina and Nevada this month.

However, Cruz says his campaign is the only one to have defeated Donald Trump, the Republican front runner, and he is the best financed opposition remaining in the field.