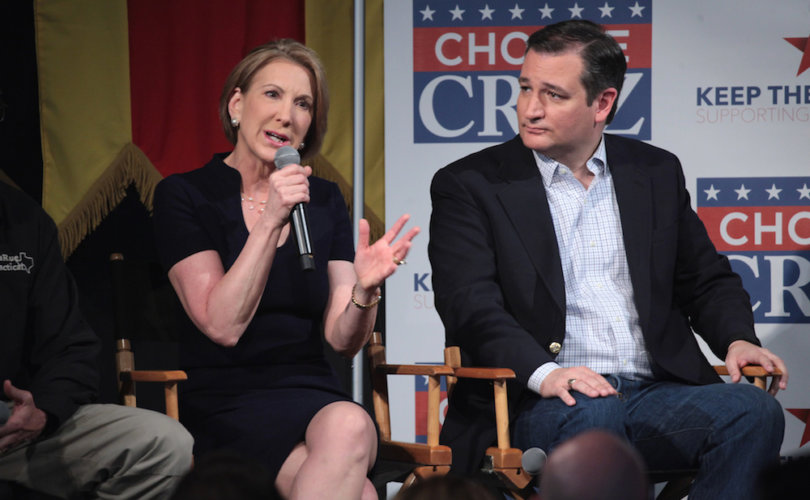 Fiorina, who led the Fortune 50 company before running for U.S. Senate in California and then seeking the Republican presidential nomination this year, delivered the keynote speech at this year's March for Life.

After dropping out of the race, Fiorina endorsed Sen. Cruz in March, calling him a “true conservative.”

“We have begun a vice presidential search process,” Sen. Cruz said on Monday. “We've begun examining both a long list and now a shorter list that has been pulled, and that naturally includes a vetting process.”

We have narrowed our VP candidates to a short list and are going thru the normal processes associated with picking a running mate.#CruzCrew

A former Fiorina staffer, Sarah Isgur Flores, told The Weekly Standard today that Fiorina is on that list.

Sen. Cruz would not confirm the identities of those he is considering, nor how many are on the list.

“At this point, no decisions have been made in terms of who a nominee would be, or what the timing would be of the announcement,” he said on Monday.

Governor John Kasich said this weekend that he has begun vetting possible running mates, although he has won only one primary – his home state of Ohio – and has only 148 of the 1,237 delegates necessary to clinch the nomination.

No word of those he's asked to take part has leaked.

Donald Trump has said, “There are people I have in mind in terms of vice president. I just haven’t told anybody names.”

1
Dr. Simone Gold says her ‘spirits are high’ as she endures solitary confinement for entering Capitol
2
Quebec Cardinal Marc Ouellet accused of sexual assault in class-action lawsuit
3
Chicago community stands with Institute of Christ the King over Latin Mass crackdown
4
Bolivian man escapes after being buried alive in a coffin as a sacrifice to the Pachamama
5
Episcopal Church endorses sex changes for children ‘at all ages’
Subscribe to Daily Headlines »