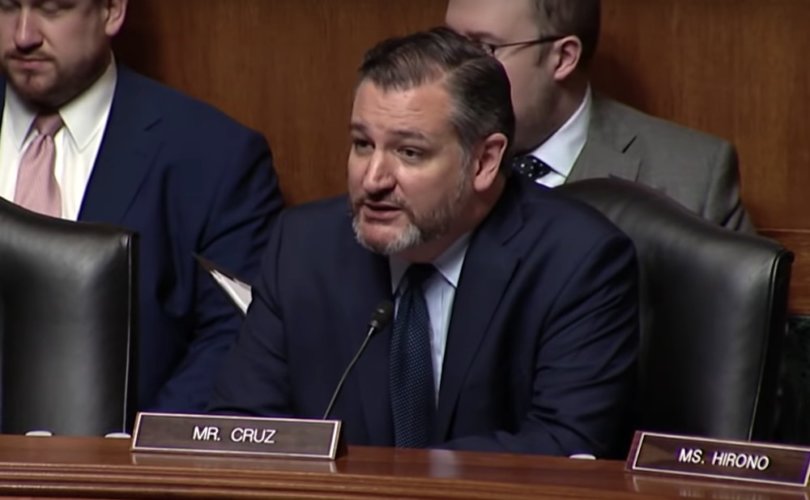 Cruz, who chairs the subcommittee, used his introductory remarks to lay out the problem and highlight three potential policy areas in which the federal government could lawfully respond.

“What makes the threat of political censorship so problematic is the lack of transparency, the invisibility,” Cruz said. “The ability for a handful of giant tech companies to decide if a particular speaker is disfavored. That he or she may speak, and their words simply fade into the ether. That nobody hears what they say. And that nobody knows that no one hears what they say. Not only does big tech have the power to silence voices — with which they disagree — but big tech likewise has the power to collate a person’s feed, so that they only receive news that comports with their own political agenda.”

Because Google, Facebook, and Twitter are private entities, Cruz acknowledged that what to do about the problem was a “thorny” legal and political question. “Nobody, or at least nobody in their right mind, wants to see a government speech police. No one wants to see the federal government regulating what is allowed to be said.” Yet he saw “at least three potential remedies” that could be taken without infringing on tech companies’ constitutional rights.

The first, he suggested, was reviewing Section 230 of the Communications Decency Act, which Cruz argued effectively grants platforms a “special immunity from liability” for the content they allow, predicated on the assumption that they are “neutral public forums” rather than publishers exercising subjective preferences.

“If Big Tech wants to be partisan and political speakers it has that right, but it has no entitlement to a special immunity from liability under Section 230 that The New York Times doesn’t enjoy, that The Washington Post doesn’t enjoy, that nobody else enjoys except for Big Tech,” Cruz noted.

“These statutory provisions have likely had a helpful role in the growth of the internet. But they are also clearly not constitutionally required – they are special favors,” he explained. “In enacting the immunity provisions, Congress assumed that protected internet services provide ‘a forum for a true diversity of political discourse.’ To the extent that assumption is weakened by online companies filtering out viewpoints that they deem ideologically impermissible, the assumptions behind Section 230 may need to be revisited.”

Kontorovich added that weakening or removing Big Tech’s liability protections might “result in more filtering and blocking of potentially controversial content,” but noted that “such greater filtering will likely not have an ideological tilt – civil liability is decidedly non-partisan.”

Cruz’s second remedy would be to invoke antitrust laws to break up the tech giants.

“Applying the antitrust laws is complicated, but by any standard measure, the big tech companies are larger and more powerful than the Standard Oil was when it was broken up,” Cruz said. “They’re larger and more powerful than AT&T when it was broken up, and if we have tech companies using their monopoly to censor political speech, I think that raises real antitrust issues.”

According to a letter sent Monday to the Federal Trade Commission (FTC) by Sens. Marsha Blackburn (R-Tennessee) and Amy Klobuchar (D-Minnesota), Google has an estimated 90 percent of web search volume, and taken together Google and Facebook account for almost 60 percent of U.S. digital ad spending.

“Compare what Google is doing today to what Microsoft was charged with in the 1990s and the (antitrust) case makes itself,” former Bush administration official James Robbins argued last August.

The third remedy Cruz suggested would be exploring whether biased enforcement of what most users assume to be neutral and open forums constitutes fraud. Conservative pundit Dennis Prager is currently suing Google on similar grounds for its restrictions on his Prager University YouTube videos. Among the suit’s complaints is that YouTube’s restrictions under false pretenses constitute breach of contract.

“Most users of Facebook, Twitter,  Google, when they use those services they don’t envision they’re participating in a biased fora,” he said. “They believe that when they speak they people that choose to follow them will hear what they say and there are distressing pieces of evidence that suggest that’s not the case.”

“Much of the argument on this topic is anecdotal. It’s based on one example, or another example,” Cruz noted. “There’s a reason for that: because we have no data. There is no transparency. Nobody knows how many speakers Facebook is blocking, how many speakers Twitter is blocking. Nobody knows what the raw data is in terms of bias.” He said pursing answers to those questions was one of the purposes of Wednesday’s hearing.

As LifeSiteNews covered Wednesday, Konzelman detailed resistance to his film, which tells the real-life conversion story of former Planned Parenthood facility director Abby Johnson, by both the entertainment and the tech industries, from the Motion Picture Association of America banning its trailers from appearing before non-“R” films and most cable networks rejecting its ads, to being blocked from Google ads and getting temporarily suspended on Twitter.

“If they are allowed to apply their own broadly drawn ‘guidelines’ to dismiss one side of controversial issues – the side they don’t agree with — and do so with impunity? Then they will do so,” he warned. “In a digital age, exclusion from the digital arena isn’t just discriminatory – it’s the most insidiously effective form of censorship imaginable.”