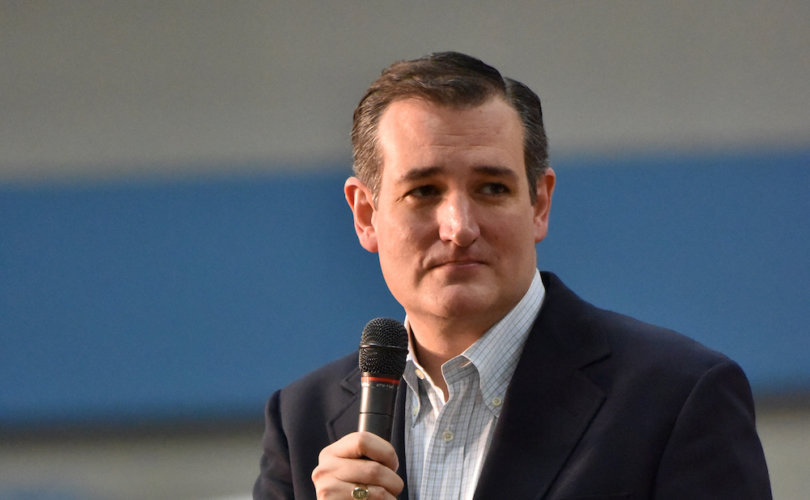 INDIANAPOLIS, May 4, 2016 (LifeSiteNews) – After a landslide defeat at the hands of Donald Trump, Texas Senator Ted Cruz suspended his presidential campaign last night.

“From the beginning, I've said that I would continue on as long as there was a viable path to victory,” a solemn Cruz said. “Tonight, I'm sorry to say it appears that that path has been foreclosed.”

“We gave it everything we got, but the voters chose another path,” he said. “And so with a heavy heart, but with boundless optimism for the long-term future of our nation, we are suspending our campaign.”

Both Cruz and Carly Fiorina, whom Cruz had named as his future running mate and who introduced Cruz after his loss, mentioned the “right to life” in their speeches last night.

The United States “began with a revolutionary idea that our rights don’t come from kings and queens and even presidents but from God Almighty,” Cruz said, “and everyone has an unalienable right to life, liberty, and the pursuit of happiness. And to protect those rights the Constitution serves as chains to bind the mischief of government.”

The senator, who highlighted his support for traditional marriage in the first presidential election after the Supreme Court decision changed its legal definition, revisited his support for people of conscience in his farewell speech.

In the 2016 election, “will we secure freedom of thought, expression, and religion for future generations?” he asked. “Will we rise to meet the challenges that face our nation on the international stage or will we withdraw and cower timidly from the world?”

He offered no endorsement of Donald Trump, whom he did not mention by name, but took a jab at the presumptive nominee by saying Americans “are not boastful or mean spirited.”

With nearly all the Indiana vote counted, Trump clobbered Cruz, 53 percent to 37 percent, despite an agreement from Ohio Governor John Kasich not to compete in his neighboring state. (Kasich still won eight percent of the Hoosier vote.)

Trump is certain to win most of Indiana's 57 delegates, giving him 1,047 delegates according to an Associated Press total, and setting him on the path to clinch the 1,237 delegates necessary to win the Republican nomination on the first ballot.

According to exit polls, Trump won among every demographic of Indiana voters – including evangelicals, conservatives, and women – except for those with a post-graduate education, “very conservative” voters, and those who attend religious services more than once a week.

In his victory speech, Trump called Cruz a “tough, smart guy” who has “an amazing future.”

Senator Cruz entered the largest presidential field in history – 17 candidates strong – as the strong favorite of the party's socially conservative base. The husband of a Goldman Sachs employee, Cruz raised more money than any other GOP presidential hopeful except Jeb Bush, a total of $140.5 million.

However, a recent report showed that, in addition to modest expenditures of his own money, Donald Trump has received nearly $2 billion in free media. Mr. Trump emerged with a focus on border security, negotiating “smarter” trade deals, and putting “America First” in foreign policy that resonated with the American people.

Sen. Cruz burnished his conservative bona fides, including his opposition to abortion under any circumstances except to save the mother's life. Mr. Trump favors abortion in the cases of rape or incest. They also clashed in recent days on the previously unthinkable political issue of transgender restroom policy.

Cruz's campaign strategy revolved around winning the Iowa caucuses, then bulldozing the competition in Southern states during the so-called “SEC primary.” But after Cruz won Iowa, Donald Trump routed him in the South, even winning evangelical voters.

Aside from Donald Trump, no other candidate inspired as much hatred from GOP insiders as Ted Cruz. Retired House Speaker John Boehner called Cruz “Lucifer in the flesh,” and former New Hampshire Sen. Judd Gregg derided the first-term Texas senator as “a demagogue’s demagogue.”

Cruz won 11 primaries and caucuses in the 2016 presidential race, the same number Rick Santorum won in 2012.

Trump attempted to unify the GOP around his candidacy last night, thanking Republican Party chairman Reince Priebus for doing a “tremendous job” during a bitter campaign.

Gov. Kasich reiterated last night that he is not leaving the presidential race, despite its outcome being all but certain. Kasich's chief strategist, John Weaver, said “Governor Kasich will continue to campaign” for “as long as it it possible,” in order to “offer the voters a clear choice for our country.” But Kasich, who won only his home state of Ohio, banked on winning a contested convention, which seems all but impossible.

Meanwhile, the Democratic race only got more complicated, and Senator Bernie Sanders defeated Hillary Clinton in the Indiana Democratic primary.