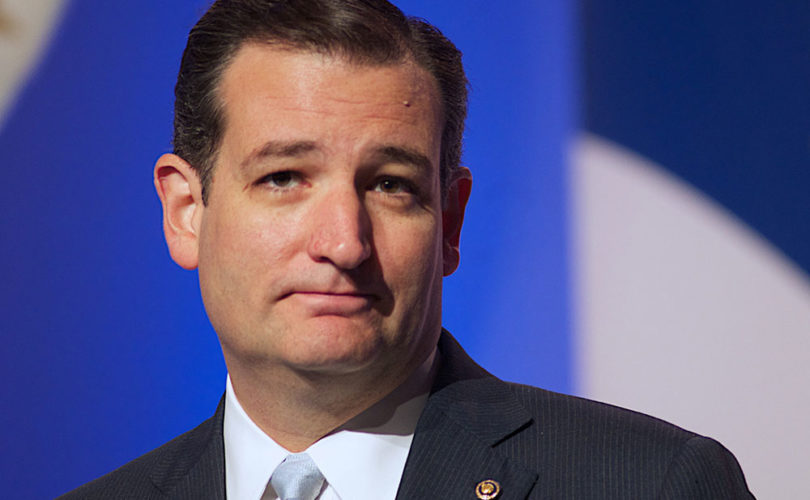 WASHINGTON, D.C., March 18, 2015 (LifeSiteNews.com) — U.S. Sen. Ted Cruz, R-TX, widely considered a potential contender for the 2016 GOP presidential nomination, told an Iowa radio host last week that the growing number of federal court rulings striking down state laws defining marriage as a union between one man and one woman represent “a real danger to our liberty.”

Explaining his plan to introduce a constitutional amendment to elicitly reserve the power to define marriage to individual states, Cruz told WHO presenter Jan Mickelson, “We have seen judges, and especially the Supreme Court, ignoring the law.”

“If the courts were following the Constitution, we shouldn’t need a new amendment,” said Cruz, “but they are, as you put it quite rightly, 'making it up' right now and it’s a real danger to our liberty.”

“If the citizens of the state of Iowa or the citizens of the state of Texas want to define marriage as the union of one man and one woman … the states have the constitutional authority to do so,” Cruz continued.  “[T]he federal government and unelected judges cannot set aside the democratically elected legislature’s reasonable decisions to enact and protect traditional marriage.”

Cruz’s interview came on the heels of remarks he reportedly made to a group of Iowa pastors in which he similarly criticized the judiciary for what he called their “unrelenting assault on traditional marriage.”  Judges who overturn state laws governing marriage are “ignoring their oaths, ignoring the Constitution and legislating from the bench,” Cruz said, according to the Des Moines Register.  He added that should he run for president, he would not shy away from the marriage issue, but continue to make it a priority.

Cruz’s statements on marriage earned him swift rebuke from left-wing media pundits.  Calling him “the most homophobic S.O.B. in the 2016 field,” The Daily Banter’s Michael Luciano said Cruz’s support for traditional marriage proves he’s “unfit for any office.”