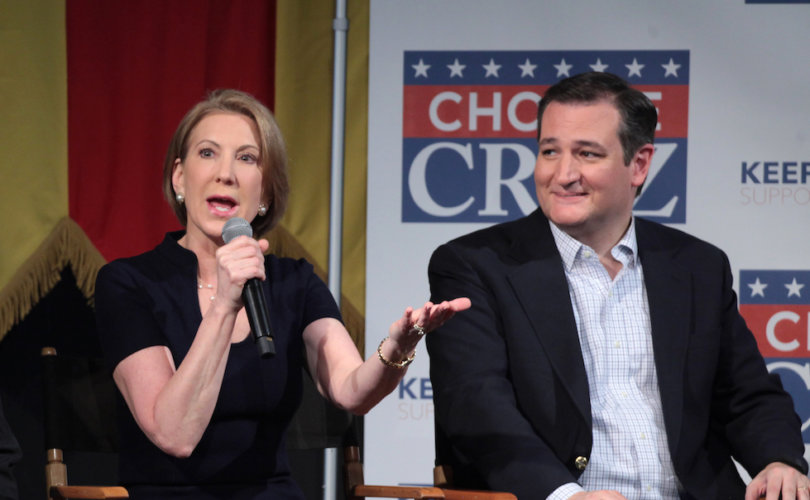 The Associated Press says it has confirmed that the senator will announce Fiorina as his VP this afternoon.

Gary Aminoff, who is part of the Cruz campaign leadership team in California, tweeted, “Senator Ted Cruz will make an announcement this afternoon that Carly Fiorina will be his VP running mate.” However, the tweet was subsequently deleted.

That followed a great deal of speculation and confirmation by other media outlets. Josh McElveen, political director of WMUR, tweeted:

Sources confirm to myself & @jdistaso that @tedcruz intends to name @CarlyFiorina as VP pick if #GOP picks him. #nhpolitics #fitn

Sen. Cruz has teased a “major announcement” at 4 p.m. in Indianapolis. NBC News reporters have spotted Fiorina in the city.

The Fiorina camp, and later the Cruz campaign, confirmed that Fiorina was on Cruz's VP short list and in the process of being vetted earlier this week.

The Cruz and Fiorina campaigns have had an intimate affinity for months. Last June, a super PAC supporting Cruz – Keep the Promise I – gave $500,000 dollars to Fiorina's political PAC, CARLY for America.

After dropping out of the race, Fiorina endorsed Cruz, calling him a “true conservative.”

Pundits suggest the former Hewlett-Packard CEO could boost Cruz's standing with women in a head-to-head match against Hillary Clinton, show that he is willing to reach out to the GOP's more moderate wing, and most importantly boost his chances in the California presidential primary.

Fiorina won the support of many pro-life leaders, including Marjorie Dannenfelser of the Susan B. Anthony List, and later forcefully challenged Hillary Clinton to watch the undercover Planned Parenthood videos exposing fetal harvesting. A firestorm broke out over whether she misrepresented their contents. Planned Parenthood activists threw condoms at her during an Iowa campaign stop, and some even called for her to be indicted. However, a pro-life group later released the complete footage verifying her description of a post-abortive baby kicking its legs.

Fiorina – who opposes abortion except in the cases of rape, incest, or to save the life of the mother – went on to give the keynote speech at this year's annual March for Life in Washington, D.C.

Opposed Kim Davis and an amendment to overturn gay “marriage”

On homosexuality, Fiorina long supported civil unions that give benefits to same-sex couples “equally” with heterosexuals, while not using the word “marriage.”

Before the Supreme Court instituted same-sex “marriage” nationwide, Fiorina said, “I think the Supreme Court ruling will become the law of the land, and however much I may agree or disagree with it, I wouldn’t support an amendment to reverse it.”

She later said Kim Davis should issue marriage licenses to same-sex couples or resign. Davis needed “to make a decision” whether she is “prepared to continue to work for the government, be paid for by the government, in which case she needs to execute the government’s will.” Private sector employees, she said, had a greater level of religious protections.

“I provided benefits to same-sex couples when I was a CEO at Hewlett-Packard,” she said.

Fiorina ran for U.S. Senate from California against Barbara Boxer in 2010. Although that effort proved unsuccessful, she remains a force in the state's GOP – whose winner-take-all primary on June 7 holds the biggest prize, 172 of the remaining 502 delegates, according to the New York Times.

Cruz has been mathematically eliminated from securing the 1,237 delegates necessary to win the Republican presidential nomination on the first ballot. His only strategy is to stop Trump from crossing that threshold, then woo uncommitted delegates on subsequent ballots at the GOP's convention in Cleveland on July 18-21.

Donald Trump has 954 delegates after sweeping all five states in last night's “Super Tuesday III” primaries in Connecticut, Delaware, Maryland, Pennsylvania, and Rhode Island – winning every single county in all five states and piling up as much as 64 percent of the popular vote.

After the primary wins, Trump said he sees himself as the presumptive Republican nominee, and former House Speaker Newt Gingrich advised his fellow Republicans to “get over” their opposition to Trump.

But Sen. Cruz dismissed Mr. Trump's stunning victory as a “home game” in the Northeast. “'I recognize that the New York media executives and the Washington lobbyists running Donald Trump's campaign both want the campaign to be over…because they recognize that this campaign has now moved onto much more favorable territory,” he said.

Pundits have debated whether Cruz should announce a running mate before the convention in hopes of winning support in the remaining primaries. In a well-received article in The Washington Post, conservative author Craig Shirley remembered that Ronald Reagan named liberal Republican Sen. Richard Schweiker of Pennsylvania his running mate in an effort to win that state's delegation at the last contested Republican convention in 1976.

“It wasn't enough,” he said, noting the delegates didn't budge.