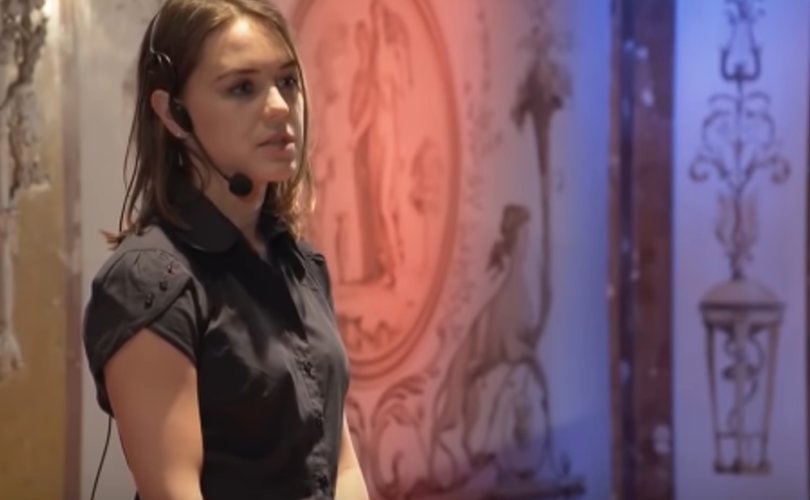 WÜRTZBURG, Germany, July 18, 2018 (LifeSiteNews) – A German medical student sparked online backlash after she was filmed telling an audience that “pedophilia is an unchangeable sexual orientation, just like… heterosexuality.”

Mirjam Heine gave a lecture in defense of pedophiles during the “independently organized” TEDx Talk at the University of Würtzberg in Germany in May. The title given to Heine’s talk was “Why our perception of pedophilia has to change.”

Introducing her theme with the “story” of “Jonas,” a 19-year-old pedophile who studies law and plays soccer, she asked her listeners to put aside their revulsion for pedophiles.

“Anyone could be born a pedophile,” she told them.

According to the medical student, pedophilia is just another “unchangeable sexual orientation just like, for example, heterosexuality.” Heine asked her audience to differentiate between sexual attraction to children, which she believes should be accepted and tolerated as involuntary “feelings,” and child sexual abuse, which she underscored was always wrong.

Meanwhile, Heine made the surprising assertion that “scientific studies” show that only 20 to 30 percent of all child molesters are pedophiles.

“The vast majority of perpetrators are not pedophiles but are sexually interested in adults,” she stated. Her example was a man who sexually abuses his step-daughter because he’s angry at, or jealous of, her mother.

At times Heine’s ideas were confused. She said heterosexuality and pedophilia were both orientations, while saying pedophilia can be “heterosexual,” “homosexual,” and “bi-sexual.” She intimated that a non-pedophile could sexually abuse a child, but also included within her definition of pedophiles people attracted, to a lesser extent, to adults. And although she seems to think people are “born” pedophiles, she also said pedophilia has biological, social, and psychological factors.

Heine stressed that social isolation of pedophiles is an important factor in how likely they are to sexually assault children. But to her, “social isolation” didn’t mean being without parents or friends – it meant the pedophile’s reluctance to tell them about his sexual inclinations.

“For example, they can’t tell their children they can’t go to the beach because children in swimsuits may be there as well,” Heine said. “They can never be completely frank with someone else.”

Openness about one’s sexual feelings is crucial to Heine. She believes that a pedophile’s ability to be “frank” and have his “orientation” acknowledged, tolerated, and accepted is key to preventing child sexual assault.

Central to Heine’s argument is that pedophiles are not to blame for their feelings and thoughts, only for their actions. She does not, however, address the topic of deliberate fantasizing or the use of pornography. And, at the same time, while arguing that pedophiles cannot change their “feelings,” she encouraged her audience to change their own feelings of revulsion for pedophiles.

“Just like pedophiles, we are not responsible for our feelings,” she said. “We do not choose them…but it is our responsibility to…overcome our negative feelings about pedophiles and to treat them with the same respect we treat other people with.”

According to Breitbart, once it was posted to YouTube, Heine’s lecture resulted in a massive online backlash. In response, the organizers of the independent TEDx event removed the video, and the founding TED Talks media organization has been trying to remove “illegal copies” from the internet. Representatives for TED Talks made a statement defending the censorship.

“After reviewing the talk, we believe it cites research in ways that are open to serious misinterpretation. This led some viewers to interpret the talk as an argument in favor of an illegal and harmful practice,” they wrote.

TED Talks continued, “Furthermore, after contacting the organizer to understand why it had been taken down, we learned that the speaker herself requested it be removed from the internet because she had serious concerns about her own safety in its wake.”

“Our policy is and always has been to remove speakers’ talks when they request we do so. That is why we support this TEDx organizer’s decision to respect this speaker’s wishes and keep the talk offline.”

TED Talks later added to its statement that it does not support or advocate for pedophilia.