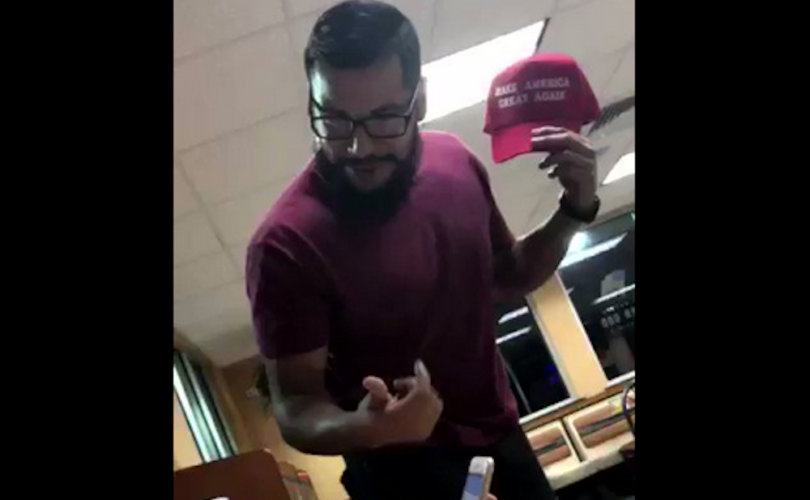 The man approached 16-year-old Hunter Richard and his friends at a San Antonio Whataburger earlier this week, local NBC affiliate News 4 reported. The man can be seen holding Richard’s stolen MAGA cap, throwing soda in his face, and telling him “you ain’t supporting s**t, n***a.” He can also be heard swearing and planning to throw the hat in his fireplace while walking away.

So went out for a 2am snack and my friend (wearing a MAGA hat) had his hat stolen and a drink thrown in his face (and mine, you can see my arms on the left of the video) pic.twitter.com/B3QjBFIxPk

Richard says the man pulled some of his hair while stealing his hat.

One of his friends caught the incident on video and posted it online, at which point it quickly went viral.

Whataburger corporate communications quickly issued a statement declaring it was “shocked” by the video and “certainly (doesn’t) condone this type of customer behavior.” It added that Whataburger staff wasn’t involved and did not witness the incident.

A police report was filed and local police confirmed to USA Today that they interviewed Richard and witnesses. On Thursday night, police identified the alleged assailant as 30-year-old Kino Jimenez and confirmed he had been arrested for theft. Jimenez has been released on a $5,000 bond.

Jimenez’s alleged actions have already cost him his part-time job at the San Antonio bar Rumble, which released a statement denouncing his actions and declaring the establishment a “SAFE SPACE FOR EVERYONE,” regardless of their politics.

It is unknown whether Richard’s original hat was recovered, but the president’s son, Donald Trump Jr., and Rep. Mark Meadows, R-North Carolina, both offered to send him a replacement signed by the president.

“This is disgusting and a disgrace,” Trump Jr. said. “Imagine if someone did this to an Obama supporter?”

There have been numerous instances of private citizens being harassed, threatened, and attacked for their pro-Trump apparel and signs, including a young black customer surrounded by Cheesecake Factory staffers in Miami, a Florida man punched in his front yard, and a Georgia public school teacher who forbade students from wearing pro-Trump shirts.

“The Sarah Sanders episode over the weekend — It is helping Donald Trump. Let me say that again, it is helping — for the people who are praising it, it’s helping him,” she said. “I know you want to jump back in, he has a 90 percent approval rating among Republicans. So what do you do with that number?”