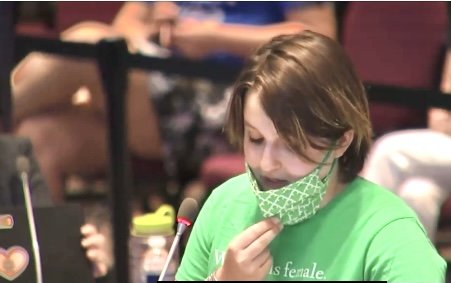 LOUDOUN, Virginia, June 14, 2021 (LifeSiteNews) — An eighth grader from Virgina tore into her school board during a passionate speech denouncing an “inclusive” policy proposal that would give boys permission to use girls’ locker rooms and bathrooms.

“Everyone knows what a boy is – even you,” said Jolene Grover at a Loudoun County Public School (LCPS) board meeting Tuesday. “Your proposed policies are dangerous and rooted in sexism.”

Among a host of provisions that would upend traditional social mores, a draft of the new proposed policy, entitled “RIGHTS OF TRANSGENDER AND GENDER-EXPANSIVE STUDENTS” (8040), includes a clause that states: “Students should be allowed to use the facility that corresponds to their gender identity. While some transgender students will want that access, others may want alternatives that afford more privacy. Taking into account existing school facilities, administrators should take steps to designate gender-inclusive or single-user restrooms commensurate with the size of the school.”

The proposed measure follows an earlier policy entitled “EQUAL OPPORTUNITY FOR EQUITABLE, SAFE AND INCLUSIVE ENVIRONMENT” (1040), which was revised in 2019 to add “inclusive” language.

“Two years ago I was told policy 1040 was just an umbrella philosophy and you weren't going to allow boys into the girls' locker rooms,” Grover said. “But here you are doing just that.”

“Now,” the 14-year-old continued, “boys are reading erotica in the classroom next to girls, and you want to give them access to girls' locker rooms and you want to force girls to call those boys 'she.'”

“You do this in the name of inclusivity while ignoring the girls who will pay the price. Your policies choose boys' wants over girls' needs.”

According to Fox, the district declined to comment on Grover’s speech.

Jolene Grover was one of many who spoke about gender at Tuesday’s board meeting.

Participants also came to voice their opinions about the recent suspension of Loudoun County Public School teacher Tanner Cross, who was put on administrative leave after telling a school board last month that he would not use “preferred pronouns” to refer to so-called “transgender” children.

“I am speaking out of love for those who suffer from gender dysphoria,” said the Leesburg Elementary School physical education teacher at a May 25 meeting. “It’s not my intention to hurt anyone, but there are certain truths we must face.”

“I'm a teacher, but I serve God first, and I will not affirm that a biological boy can be a girl and vice versa, because it's against my religion. It's lying to a child. It's abuse to a child. And it's sinning against our God.”

Cross condemned a section of the policy 8040, that would mandate that Loudoun staff use “preferred pronouns.”

According to the policy, “LCPS staff shall allow gender-expansive or transgender students to use their chosen name and gender pronouns that reflect their gender identity without any substantiating evidence, regardless of the name and gender recorded in the student’s permanent educational record.”

The policy continues: “School staff shall, at the request of a student or parent/legal guardian, when using a name or pronoun to address the student, use the name and pronoun that correspond to their gender identity. The use of gender-neutral pronouns are appropriate. Inadvertent slips in the use of names or pronouns may occur; however, staff or students who intentionally and persistently refuse to respect a student’s gender identity by using the wrong name and gender pronoun are in violation of this policy.”

Cross was put on paid administrative leave less than two days after making the comments.

Last Tuesday, a judge ruled that the school acted unconstitutionally, ordering LCPS to reinstate Cross immediately. The district has subsequently appealed the decision, promising to take the matter to the Virginia Supreme Court.

“He wasn’t being unkind to anyone. He wasn’t attacking anyone. He wasn’t doing anything other than speaking his principles and his beliefs,” said Rosie Oakley of Stand Up Virginia, a grass-roots nonprofit group with a mission “to restore the future of Virginia to protect our children's education, the safety of our communities, and our vote.”

“It speaks to the fact that politics has entered the classroom and entered the school systems,” Oakley said.