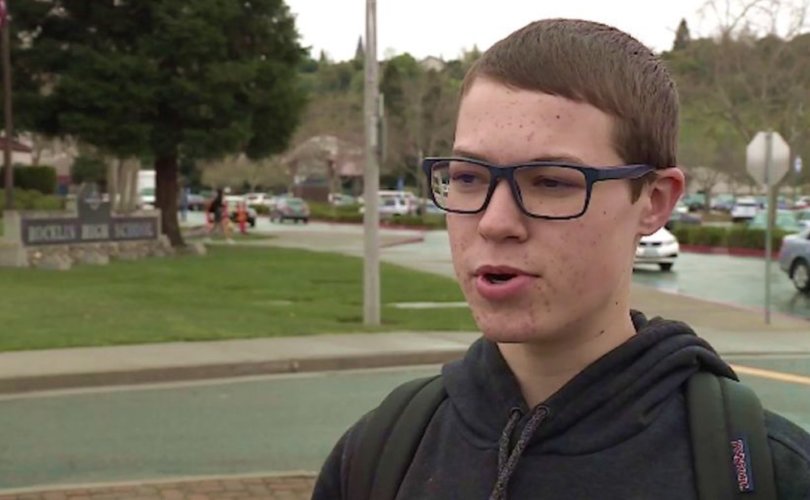 ROCKLIN, California, March 26, 2018 (LifeSiteNews) – A 17-year-old California student is planning a pro-life “walkout” to take place at schools across the country next month in imitation of the recent ‘gun-violence’ protests.

The aim of the event is to witness to the millions of lives destroyed by abortion. The event will also test if there’s a double standard from school administration when it comes to allowing students to protest against destroyers of life and the tools they use.

Rocklin High School student Brandon Gillespie is organizing a nationwide pro-life student demonstration to “honor all the lives of the millions of aborted babies every year.”  He also wants to focus the nation’s attention on “cruel injustices taking place at Planned Parenthood.”

Every school in the United States is encouraged to participate in the pro-life walkout Wednesday, April 11, at 10:00 am EDT, for 17 minutes.

I have officially announced the pro-life walkout that i am organizing. It is going to take place on Wednesday, April 11th at 10:00 am. The walkout will last for 17 minutes. We encourage students across the country to participate in a stand for #life

Gillespie is also organizing the event after his history teacher was suspended for questioning the anti-gun walkout and commenting that such an event would likely not be tolerated had the protest been over abortion.

Gillespie's walkout will put his school’s administration to the test to see if they will allow student protests standing for conservative values.

“I would like to see if there really is a double standard and what will come of that,” the pro-life walkout organizer said.

“Having opened the door to student-led walkouts as a way to express a political or cultural viewpoint, schools cannot shut that door to pro-life students who also are moved by the loss of life and horrific realities of the toll of abortion,” she added.

Gillespie says he was inspired by his history teacher, Julianne Benzel. Benzel was abruptly disciplined and not allowed back to school for two days when she initiated a class discussion about the partisan nature of “walkout” protests for stricter gun laws.

An estimated 3,000 public schools across the United States gave permission for students to walk out of classes on March 14, one month after the deadly shooting at Marjory Stoneman Douglas High School in Parkland, Florida.

Mrs. Benzel started the discussion in her history class about the then-upcoming anti-gun protests. “If schools across the country are going to allow one group of students to get up during class and walk out to protest one issue, would they still give the same courtesy to another group of students who wanted to protest…abortion?” she challenged.

“If you’re going to allow students to walk up and get out of class without penalty then you have to allow any group of students that wants to protest,” she later explained.  “Are we going to allow this on the other side?”

Julianne Benzel: “Would they still give the same courtesy to another group of students who wanted to get up and walk out to protest?” pic.twitter.com/sbV3vdkFOI

The 20-year veteran teacher at Rocklin was promptly given an official letter informing her that she was immediately on “administrative leave.”  She was, in her words,  “aghast.”  She added that the way she was handled has created a “climate of fear” among Rocklin teachers.

Benzel, a mother of five, says she believes school officials only allowed her back after two days of being banned because of widespread backlash over her suspension.

Gillespie admitted his planned 17-minute pro-life walkout is seeking to do just that: answer Mrs. Benzel’s question of the existence of a liberal double standard at Rocklin and at schools across the nation. He noted that in the past, Rocklin High blocked prolifers peacefully handing out pamphlets across the street from the school.

The student organizer told the National Review that his protest is not only for the sanctity of innocent human life but also “stands for all students’ right to freedoms of speech and assembly.”  He is calling on Rocklin High administration to publicly apologize to the history teacher.

“Brandon Gillespie is a terrific example of the passion this pro-life generation has,” Hawkins said. “His courageous effort to draw attention to the reality that more lives have been lost in our generation to abortion than all other causes should be national news.”

Gillespie says he will go forward with the pro-life demonstration whether the school approves of it or not.