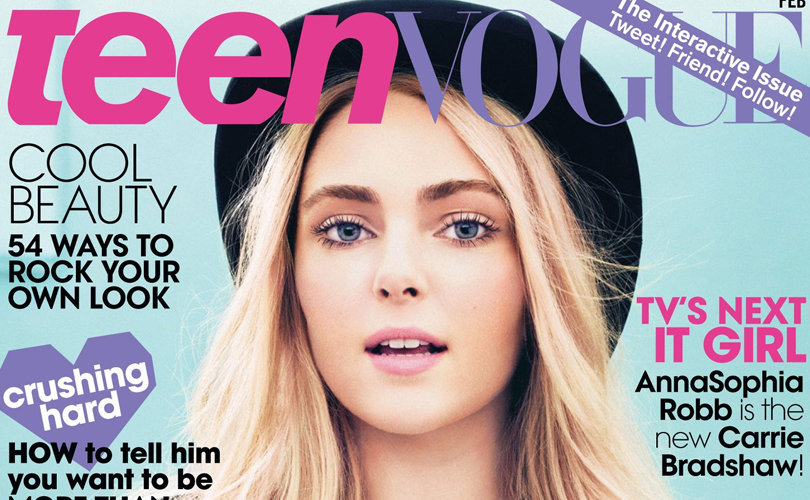 Toward the end of the piece, Engle brings up the grotesque realities of rectal “sex,” almost as an afterthought. Another pullout quote reads: “Yes, you will come into contact with some fecal matter.”

The article cavalierly ends with these three sentences: “It’s NOT a big deal. Everyone poops. Everyone has a butt.”

In another tweet in the same string that ends with his protruding middle finger, Picardi blames the flood of criticism of Teen Vogue on “homophobia,” a familiar rhetorical defense for LGBTQ activists:

“The backlash to this article is rooted in homophobia. It's also laced in arcane delusion about what it means to be a young person today.”

He followed that with a tweet reading, “I monitor the webmaster email and have been inundated with hate mail saying we promote sodomy and want teens to get AIDS.”

“All great if the article had been helpful and educational. Problem is it was deficient in its info and let down teen girls.

“No mention of risks. No in depth discussion of pressure. Confusion over historical context. Missing parts of female sexual anatomy etc etc

“Trying to present the article as educational and helpful rather than the opposite is highly disingenuous.

Here's the British Medical Journal on some of the issues that you should have addressed:  https://blogs.bmj.com/bmjopen/2014/08/13/anal-sex-between-young-men-and-women-often-seems-coercive-and-painful/

Picardi went on to blame his Catholic school upbringing for insufficient education about “safer sex.” The following are among his tweets:

“It's funny, because I went to Catholic high school and had 0 sex education. I also had a teacher tell me gay sex was a sin in God's eyes.

“Fast forward to frosh year of NYU, me crying at Callen-Lorde Community Health Center, bc I'd just slept w someone who I found out was HIV+.

“You see, my Catholic school was guilty of endangering all of us by sheer omission of FACTS. EDUCATION doesn't equal ENCOURAGEMENT.

“Multiple studies have shown abstinence-only sex-ed is linked to higher rates of STIs and teen pregnancies.

“TBH [To be honest], it is IRRESPONSIBLE. How can you possibly expect teenagers to practice safe sex if they don't know what's at risk?

“How can you expect young women to not get pregnant without access to reproductive health care?”

However, to Picardi’s point about informing kids about risks and “safe sex,” medical experts concerned about the youth magazine’s frivolous promotion of rectal sex fault it specifically for not being accurate and comprehensive in educating about the health hazards of this unnatural act.

Not healthy for ‘gays’ or straights

Echoing a theme in the original Teen Vogue article, Picardi states in successive tweets: “But until queer sex, love, and families are included in education, we're doing a dangerous and potentially lethal disservice … to a growing population. Gen Z will be our queerest and most fearless generation yet.” (Generation Z is the newest generation.)

But Amy Contrada, a researcher with the national pro-family group Mass Resistance, told LifeSiteNews that she fears for today’s youth. She says they are bombarded with sexual and gender misinformation and — like the Teen Vogue article — a politically correct lack of understanding about the special risks associated with LGBTQ behaviors and lifestyles.

“For decades now, our society has allowed — and promoted — the message that sodomy (penis-anus intercourse) is a perfectly normal and even healthy expression of human sexuality. Not surprisingly, CDC statistics show that increasing percentages of men and women are engaging. Accordingly, many heterosexual men (and likely many who identify as bisexual or even ‘gay’) are demanding it of their female sexual partners,” she said.

Last year, MassResistance published a book, Health Hazards of Homosexuality, documenting the many risks associated with homosexual practices and lifestyles.