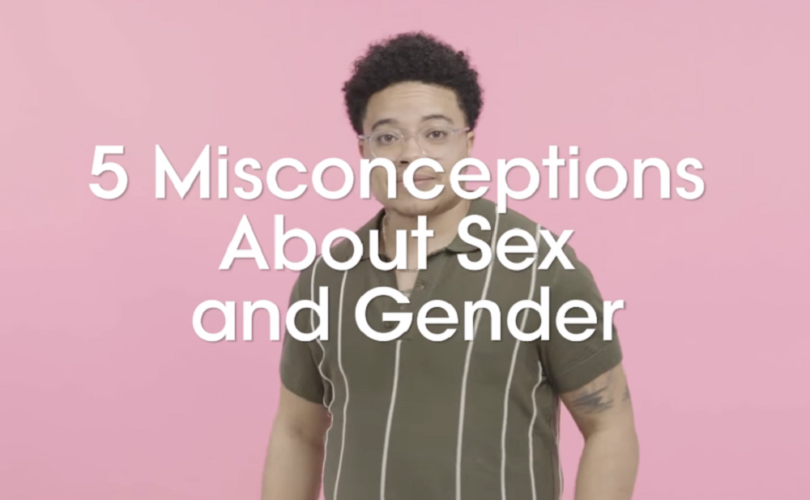 NEW YORK CITY, April 25, 2019 (LifeSiteNews) — Teen Vogue, a leftist website that focuses on fashion, art, and politics, featured a video in which several of its writers insist that biological sex is but a social construct.

Titled “5 Misconceptions about Sex and Gender,” the video depicts several LGBTQ activists and journalists. At the beginning of the six-minute video appears Belgian fashion model Hanne Gaby, who claims to be “intersex.” She tells the camera the binary understanding of sex as male and female is “b‑‑‑‑‑‑‑.”

Rock musician and Teen Vogue editor Lucy Diavolo says on camera, “When I say, ‘I’m a woman,’ I don’t just mean that I identify as a woman. I mean that my biology is the biology of a woman, regardless of whether or not doctors agree.” Diavolo later says “transwomen” are wrongly seen as predators when they use bathrooms designated for women.

LaLa Zannell, the ACLU’s transgender justice campaign manager, claims in the video: “Human beings are so complex that each person has the right to define who they are. And ‘X’ and ‘Y’ can’t define who you are in your heart, in your mind, as you’re growing in life.”

Chase Strangio, an ACLU attorney, says “political choices, social factors, ideological choices” assign meaning to parts of the human body. “The meaning,” Strangio says, “may be that, the thing that most of us are taught, is that if you have a vagina you’re a girl, and if you have a penis you’re a boy.”

Katrina Karkazis, the co-author of the book Testosterone: An Unauthorized Biography, says biological sex is not determined by nature, but is a self-determined construct. “Too many people,” she says, “still believe that there’s such a thing as a true sex and that it comes from your chromosomes. It’s not the case. Science has known this for decades, and it’s actually a consensus in science and uncontroversial.”

Karkazis also notes that women have testosterone, which Karkazis says is needed for body functions, and adds, “So, it’s really a misnomer calling it the male sex hormone. Everybody has it, everybody needs it, it’s not just about sex.”

An article at the website of the National Institutes for Health notes the importance of testosterone in men:

Testosterone is a sex hormone that plays important roles in the body. In men, it’s thought to regulate sex drive (libido), bone mass, fat distribution, muscle mass and strength, and the production of red blood cells and sperm. A small amount of circulating testosterone is converted to estradiol, a form of estrogen. As men age, they often make less testosterone, and so they produce less estradiol as well. Thus, changes often attributed to testosterone deficiency might be partly or entirely due to the accompanying decline in estradiol.

In the video, the assertion is made that “1.7 percent of the population is intersex.” This controversial datum is a was devised by Prof. Anne Fausto-Sterling of Brown University and widely cited by LGBTQ activists. However, an article by Leonard Sax that appeared in the Journal off Sex Research in 2002 and cited by the National Institutes of Health states:

Anne Fausto-Sterling’s suggestion that the prevalence of intersex might be as high as 1.7% has attracted wide attention in both the scholarly press and the popular media. Many reviewers are not aware that this figure includes conditions which most clinicians do not recognize as intersex, such as Klinefelter syndrome, Turner syndrome, and late-onset adrenal hyperplasia [genital abnormalities]. If the term intersex is to retain any meaning, the term should be restricted to those conditions in which chromosomal sex is inconsistent with phenotypic sex, or in which the phenotype is not classifiable as either male or female. Applying this more precise definition, the true prevalence of intersex is seen to be about 0.018%, almost 100 times lower than Fausto-Sterling’s estimate of 1.7%.

Distinguishing male and female is based on the sexes’ respective roles in procreation. A person possessing the capacity to reproduce with a female is thus biologically male. On the other hand, a person with the capacity to reproduce with a male is biologically female. The designation of male and female are correlative terms because they are defined in reference to each other.