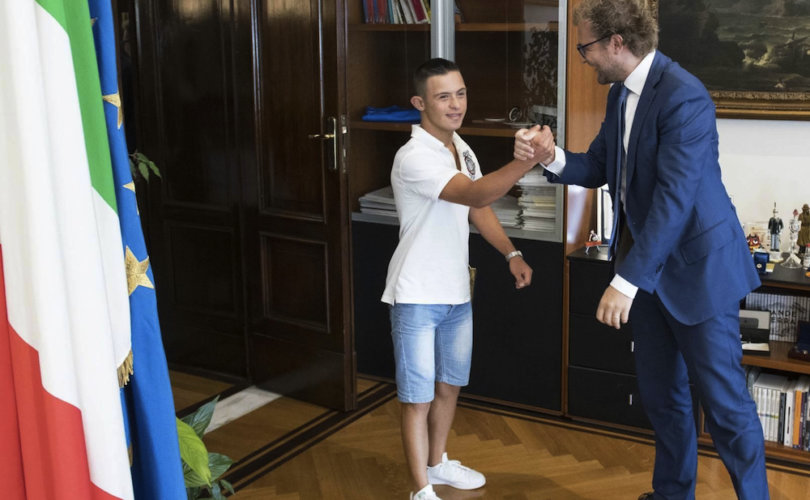 Valerio Catoia was honored as a 'Solidarity Champion of Italy.'

LAZIO, Italy, August 25, 2017 (LifeSiteNews) — A 17-year-old boy with Down syndrome is a hero in Italy after saving a little girl from drowning.

Valerio Catoia and his family were at Sabaudia Beach on July 12 when two girls ages 10 and 14 were literally swept out to sea. They were no match for the powerful undercurrent that relentlessly rushed them farther out by the second. They screamed for help.

“The little one started to go down but then re-emerged,” the Republic reported. Valerio “instinctively” dived after her instantly.

Valerio's father also heard the girls crying out and immediately went into action. Ahead of lifeguards trying to help, the two heroes reached the girls struggling to stay afloat.

While the father assisted the older girl, Valerio reached the younger girl, cradled her, and swam her safely to the shore.

News of the rescue spread and Valerio quickly became a national hero. Italian citizens not only accepted the Down syndrome teen, they championed him all the more for overcoming his disability.

Italian Minister of Sporting Luca Lotti hosted Valerio and awarded him as “Solidarity Champion of Italy” for his bravery. Also honoring Valerio were Luca Pancalli, the president of the Italian Paralympic Committee, and Olympic swimmer Stefano Battistelli.

Former Prime Minister Matteo Renzi said of the Down teen that all of Italy should feel proud to have citizens like him.

Valerio loves the water. He has been swimming since he was three. His parents put him in swim lessons at a young age to help him develop muscle strength and coordination.

As a result, Valerio has become a competitor, taking part in the Special Olympics. His abilities, and not his disabilities, define him — and have saved a girl from drowning.

Despite all of the national adoration, Valerio says he hasn't changed. He went back to scouting activities and looks forward to school starting. He says, however, that it seems folks around him have changed.