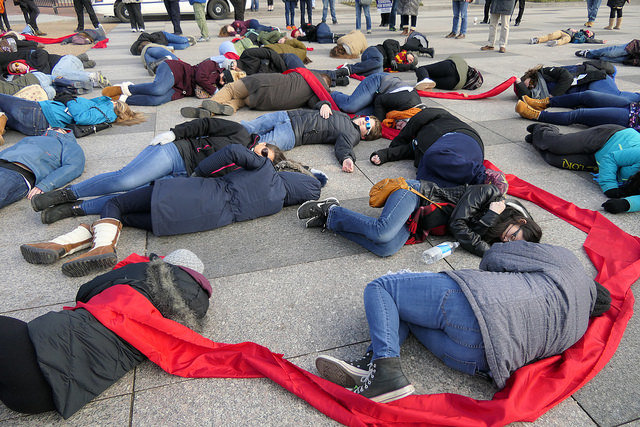 WASHINGTON, D.C., January 27, 2017 (LifeSiteNews) – About 100 teenagers held a “die-in” next to the White House today to call attention to the injustice of abortion and to remind President Trump of his pro-life promises.

Draped in red banners to symbolize the blood of innocent humans killed by abortion, the youth lay motionless in the fetal position while pro-life leaders prayed and spoke through a megaphone. Tourists, commuters, and March for Life pilgrims stopped to watch the demonstration.

“I am participating to stand for the lives of the innocent preborn women and men who have died to abortion and those who will die to abortion, for their right to life,” Sarah Jimenez of Created Equal told LifeSiteNews. She said she hoped the die-in would educate onlookers about abortion and inspire them to “stand against the killing of innocent children.”

Father Terry Gensemer of the Charismatic Episcopal Church for Life (CEC), one of the event organizers, told LifeSiteNews that the youth weren't protesting President Trump's position on abortion, as they did with President Obama in past years.

“From what we’ve seen, [Trump has] been favorable toward our cause,” said Gensemer. “But we did want to remind him and remind others that this is still going on. We want to see things done, we want Planned Parenthood defunded, we want pro-life bills passed, we want a pro-life justice placed on the Supreme Court.”

Last year, “not only were we slushing through the snow…we had a president who went to the prayer breakfast and declared that he thought there was a problem with Christians because of the crusades,” Star Parker of the Center for Urban Renewal and Education told the youth. “This is also the same president last year that went to Planned Parenthood and said, ‘God bless you, Planned Parenthood.’ …But it’s a new day today. We have a new president, a president who has promised the pro-life community that justice will be served. So let’s dig down deep in our hearts and find that hope.”

Part of the cold and pain the teens experienced lying on the ground allowed them to identify with the babies killed by abortion. Deja Simmons told LifeSitenews the experience gave her a new understanding of the difficulties mothers facing unexpected pregnancies face.

“Lying there…I just realized how…blind the world is to this and how terrible it really is,” she said.

“My goal today is to drag what is invisible to the visible light,” Created Equal's Seth Drayer told LifeSiteNews. He said he hoped passersby would “realize this is not something they can ignore anymore. Abortion happens behind closed doors. People do not see the victims often times, and they walk and they see students lying on the ground, they hear speakers, they see images of abortion, they will know what it is…we must identify with the victims.”

Abortion “is undercutting the basic value of every single human,” said Drayer. “We must win this battle.”