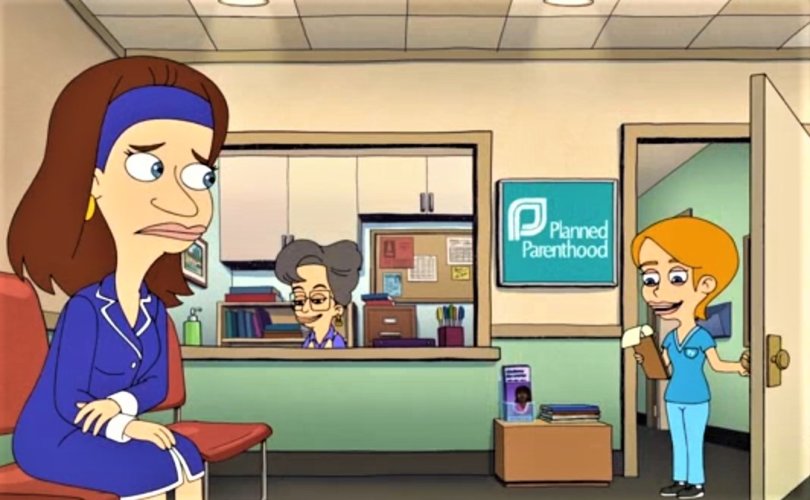 A cartoon targeting teens gives a very sympathetic portrayal of a woman getting an abortion at a Planned Parenthood clinic on Netflix's 'Big Mouth' TV show.

“This is more evidence that Netflix is becoming an evil media empire intent on corrupting its millions of young viewers with liberal ideology,” said Jack Fonseca, a spokesman for Campaign Life Coalition, in an interview Monday.

“How twisted do you have to be to ask children to look up to Planned Parenthood, the world’s No. 1 killer of children? That’s like asking Jews to celebrate Adolf Hitler. It’s so gross,” he said.

The program, which aired during Big Mouth's second season, is actually called The Planned Parenthood episode.

It's rife with cheap shots at pro-lifers.

When a boy in the class points out that Planned Parenthood is an “abortion factory,” a self-righteous girl quickly puts him in his place, “Jake, you don't know what you're talking about. You've never even been to a Planned Parenthood.”

The girls in the classroom tell “Jake” that “abortions make up only a tiny portion of what they do.” The show pushes the message that Planned Parenthood does cancer screenings and breast exams and offers contraception.

Former insiders at Planned Parenthood who have since left the abortion business tell a different story.

As Planned Parenthood's funding has come under threat, abortion backers have been increasingly vocal in their support of the organization.

Early last summer, the pro-abortion website Jezebel published a video of artist Viva Ruiz's “Thank God for Abortion” float. Before her show was canceled, comedian Michelle Wolf devoted a segment of The Break to promoting abortion-on-demand. And in the July issue of her magazine, entertainment icon Oprah Winfrey devoted an article to the founder of the “Shout Your Abortion” movement.

None of that pro-abortion protesting, though, prevented U.S. President Donald Trump from nominating Justice Brett Kavanaugh to the Supreme Court of the United States. Nor did the pro-abortion pushback manage to quash the film made of the most notorious late-term abortionist in the United States. Gosnell: The Trial of America's Biggest Serial Killer was the fourth most successful new film on its opening weekend.

Planned Parenthood continues to try to present itself as a women's reproductive health organization, but insiders say that's just not true.

“Their annual report demonstrates that Planned Parenthood is not a healthcare organization but a political movement, intent on forcing their pro-abortion views on as many Americans as possible,” said Johnson.

Fonseca calls it a “diabolical irony” that Planned Parenthood killed so many unborn children in their last fiscal year and this Big Mouth episode targets children to celebrate that slaughter of innocents.

“Netflix customers need to tell the company just how much they disagree with this programming, either by writing a letter or email, or even cancelling their subscriptions and telling Netflix why,” he said.

Respectful complaints to Netflix can be made by calling the company's customer service line at 1-888-811-9842.