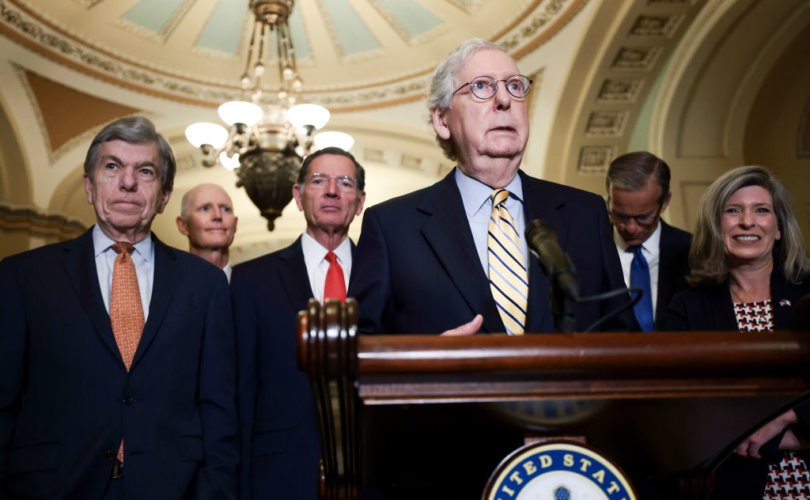 (LifeSiteNews) – With the Senate on the verge of passing Democrats’ radical Respect for Marriage Act and codifying homosexual “marriage,” LifeSite has launched a new petition urging Republican senators to oppose the bill and protect “natural marriage and the constitutional freedom of individual states.”

The so-called Respect for Marriage Act (RFMA) would enshrine same-sex “marriage” into federal law, override duly-enacted laws and constitutional amendments in 35 states, require the federal government to recognize polygamous marriages or any other redefinitions of marriage if a state approves them, and open the door to drastic attacks on religious freedom.

In the event that the Supreme Court overturns its 2015 decision that mandated recognition of same-sex “marriage” nationwide, conservative states would still be forced to grant “full faith and credit” to homosexual “marriages” and other civil marriages “between two individuals” recognized by another state if the Respect for Marriage Act becomes law.

Despite the disastrous ramifications of the RFMA for marriage, faith, and the family, the House passed the bill in July with an unexpected 47 Republican votes and the blessing of GOP House leaders.

Since then, four Republican senators have publicly signaled that they will likely vote for the the measure when it comes before the Senate: Susan Collins of Maine, Rob Portman of Ohio, Thom Tillis of North Carolina, and Lisa Murkowski of Alaska. Wisconsin Republican Sen. Ron Johnson initially said he saw “no reason to oppose” the RFMA but has since somewhat backpedaled his apparent support amid grassroots conservative backlash.

Democrats need 10 Republican votes to overcome the Senate filibuster and send the Respect for Marriage Act to Joe Biden, a longtime backer of same-sex “marriage,” who has enthusiastically endorsed it. The bill would be Biden’s first major LGBT-related legislative victory – and just in time for the midterms.

Senate Democrats, who have vowed to bring the RFMA up for a vote as early as September, are confident that they have the votes they need. “I am feeling very hopeful that we’ll have in excess of 10 votes from the Republicans that we need,” said Wisconsin Democratic Sen. Tammy Baldwin in an interview with MSNBC last week. Baldwin, the first openly lesbian senator and a co-sponsor of the RFMA, cited “many encouraging, hopeful conversations” she has had with Republicans privately about the bill.

Republican Senate leader Mitch McConnell has still not announced a public position on the RFMA, and Sen. John Thune, the Senate GOP whip, has said that Republican leadership will probably not urge senators to oppose it.

‘A blatant denial of God’s plan’

Faithful Catholic leaders, including Bishop Joseph Strickland of Tyler, Texas, have strongly condemned the Respect for Marriage Act, with Bishop Strickland warning that the legislation “places us in great peril.”

“To continue down this path is destructive to the human community now and puts our eternal salvation in jeopardy,” he wrote in a blog post.

“The ‘Respect for Marriage Act’ would do the opposite of what its name implies, codifying a demand for states and the federal government to honor whatever may be deemed ‘marriage’ by any other state,” the archbishop lamented, noting that three cities in Massachusetts have already granted legal recognition to polygamous partnerships.

“The health and socioeconomic benefits of stable family life with a mother and a father are well-established, as are the positive outcomes for children raised in such a home,” and children have a “basic right” to be raised by a mother and father in an exclusive, lifelong marriage whenever possible, he stressed.

The RFMA “would require federal recognition of any one state’s definition of marriage without any parameters whatsoever,” including “plural marriages, time-bound marriages, open marriages, marriages involving a minor or relative, platonic marriages, or any other new marriage definition that a state chooses to adopt,” the groups warned.

The radical bill, moreover, “effectively deputizes activist groups to sue religious individuals, organizations, and businesses that operate according to their sincerely held religious belief that marriage is between one man and one woman and also act ‘under color of state law,’” which could include faith-based foster care agencies, social service groups, and other religious organizations that contract with the government.

The Internal Revenue Service (IRS) could additionally use the RFMA to strip faith-based institutions of their tax-exempt status if they uphold traditional marriage, the letter further warned. “As such, anyone who supports this measure is crossing a line into aiding and abetting the persecution of people of faith.”

Along with the LifePetition, LifeSiteNews is running a Voter Voice campaign alerting senators about conservative voters’ opposition to the Respect for Marriage Act and the dangers posed by the bill.