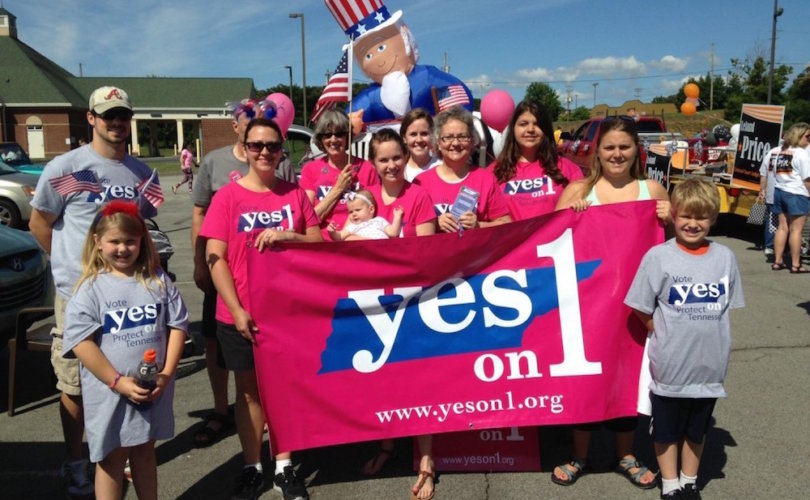 NASHVILLE, Tennessee, April 27, 2016 (LifeSiteNews) – The State of Tennessee is appealing a federal judge’s order to recount a 2014 voter-approved constitutional amendment allowing lawmakers to pass regulations on abortions in the state.

U.S. District Judge Kevin Sharp ordered recount of Amendment 1 last Friday on the grounds the “no” votes of plaintiffs “were not accorded the same weight” as those who voted to approve the amendment, but deferred on the question of whether the election on Amendment 1 should be voided.

Sharp’s decision followed Circuit Court Judge Michael Binkley’s finding just one day prior in favor of how the state counted the ballots, and orders Tennessee election officials to re-tabulate votes to count just the votes on Amendment 1 cast by voters who also voted in the governor's race.

Siding with eight abortion advocates who sued claiming the state counted the ballots for Amendment 1 in a way that favors pro-life supporters, Sharp ruled the method used by the state to count votes for the amendment was “fundamentally unfair,” and in violation of due process and equal protection rights for voters under the U.S. Constitution.

A spokesman for Tennessee Attorney General Herbert Slatery said in a statement the issue is one for the state to decide.

“We obviously disagree with the federal court's decision,” Harlow B. Sumerford said. “Simply put, deciding what vote is required to amend the Tennessee Constitution is a matter of state law to be determined by a Tennessee Court. This has been the State's position from the outset of this litigation.”

Tennessee voters passed the amendment with 53 percent approval in the November 2014 election, after more than a decade of legal wrangling over waiting periods, pre-abortion counseling and late-term abortions had left Tennessee an abortion destination due to the state’s lack of regulation.

The amendment definitively removes the “right” to an abortion from the state’s constitution, and has led to new abortion facility regulations and a 48-hour waiting period for women seeking an abortion in Tennessee.

Eight abortion advocates, including four board members of Planned Parenthood of Middle and East Tennessee (PPMET), sued three days after the amendment’s passage to overturn it, on the grounds the votes for it were miscounted and claiming some voters were disenfranchised.

Citing an arguable interpretation of the state’s constitution, the plaintiffs’ claim was based on the fact there were more votes cast on the amendment than had been for the governor’s race.

The constitution says that for an amendment to succeed, it must be ratified “by a majority of all the citizens of the state voting for governor, voting in their favor.”

Binkley’s ruling last Thursday had granted the state an order stating that Tennessee election officials' manner of counting votes was in line with the state constitution, with him noting that the language in the Tennessee Constitution on how votes for amendments are to be counted is “unambiguous.”

Binkley dismissed the pro-abortion plaintiffs’ contention that the language means only the voters who voted in the governor's race can have their vote's counted on a ballot measure, saying in his ruling that the Tennessee Constitution “does not precondition the right of a citizen to vote for or against a constitutional amendment upon that citizen also voting in a gubernatorial election.”

However Sharp backed the abortion advocates’ assertion of miscounting on the part of the state, citing the constitution language saying amendments are to be ratified by a “majority of all citizens of the state voting for governor.”

The “seemingly simple sentence is subject to two different readings,” Sharp wrote, and yet said the language “suggests only one interpretation — voters must vote for governor in addition to voting on a proposed amendment.”

“In this case, Plaintiffs voted for governor and against Amendment 1,” said Sharp. “Their votes, however, were not given the same weight as those who voted for Amendment 1 but did not vote in the governor's race.”

He also said Binkley's ruling was not based on the federal constitution, rather the state's, and that the state judge’s ruling has no impact on his decision.

Tennessee Right to Life criticized Sharp’s order to throw out any ballots with votes in favor of Amendment 1 should they not include votes for governor, saying Sharp was on shaky legal ground, since interpretation of the Tennessee Constitution belongs with the state courts and state court judges.

“Sharp's basis for taking such a radical step is that he shares the view of Planned Parenthood that votes of those not casting a ballot in the governor's race were more heavily weighted and favored than those of pro-abortion voters who opposed Amendment 1,” Tennessee Right to Life President Brian Harris said in a statement.

One female Tennessee citizen, who voted in favor of Amendment 1, at the same time not casting a vote for governor, took issue with the argument her vote for the amendment should not count.

“I am a registered female voter in Tennessee,” Jennifer Hay told LifeSiteNews. “In November 2014, I cast a ballot in full compliance with the laws of the State of Tennessee; I voted ‘yes’ on Amendment 1 but I did not vote in the governor's race.”

“Not voting is, in fact, a deliberate and meaningful voting action, and I absolutely meant my non-vote for Governor Haslam,” Hay stated. “Until today, I thought I had every right to cast such a vote in America.”