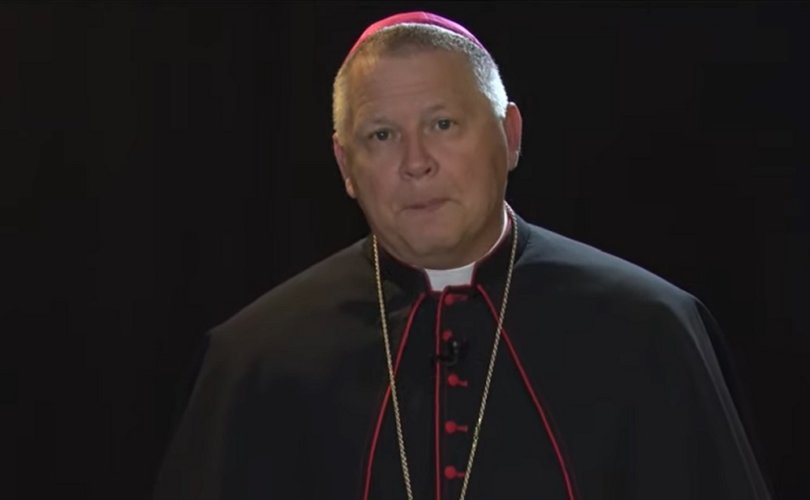 KNOXVILLE, Tennessee, (LifeSiteNews) — Catholics are threatening to defund the Diocese of Knoxville, Tennessee if a mandate requiring all employees to receive a COVID-19 shot goes into effect Monday, January 10.

The diocese announced shortly before Christmas via email that all of its employees “must be fully vaccinated no later than January 31, 2022 or submit proof of a negative COVID-19 test every 7 days from a medical professional and wear a cloth face mask over his/her face and nose while at work.” Those who do not comply “will be subject to discipline up to and including termination.”

The stated possible exemptions are narrowly given: “Employees may request an exception from this mandatory vaccination policy if the vaccine is medically contraindicated” or “may be legally entitled to a reasonable accommodation…because of a disability.”

Jenny Hay, chief organizer of the “Defund the Diocese” campaign, wrote to Bishop Rick Stika earlier this week announcing, “Effective immediately, we are suspending all our charitable donations to any operation of the Diocese of Knoxville until we receive assurance that the vaccine mandate…will not be imposed on diocesan employees. Further, we will use all means at our disposal to persuade others to do the same.”

Hay noted in her email that her family contributed no small amount in donations the previous year. She told LifeSiteNews that thus far, at least 100 people have shared their intent to follow through with the campaign to defund the diocese, if the mandate is passed.

“We dearly love you and our Church, but we cannot in good conscience grant legitimacy to this mandate by continuing to financially support the diocese,” Hay continued in her email. “Let there be no doubt that we look forward to a quick resolution so that we can resume our support.  We understand the diocese may not implement this plan, pending U.S. Supreme Court action, but the plan already threatens diocesan employees.”

Diocese Communications Director Jim Wogan confirmed to LifeSiteNews Friday that they are “waiting for the Supreme Court to make a decision” regarding the Biden administration’s COVID-19 vaccine mandates for employers before deciding whether to implement the COVID shot/testing policy for the diocese.

However, Hay noted that “even if the Supreme court strikes it down, the diocese can still implement” the mandate.

“Let everyone who reads this know that the last thing I wish to do is wage a campaign to ‘Defund the Diocese,’” wrote Jenny Hay, chief organizer of the campaign, in an email to members of the diocese. “Every day, the Diocese of Knoxville is the Body of Christ to East Tennessee. This is why it is important to act now…”

For Hay, the issue of what amounts to a coercive vaccine mandate is triply important, since it violates conscience objections to abortion-tainted shots, infringes upon bodily autonomy, and  is an affront to the freedom of diocesan employees.

“If I were somehow persuaded tomorrow that this was somehow ethical and safe, I wouldn’t take it now for the threat to freedom,” Hay told LifeSiteNews. In this way, said Hay, the mandate “is a clear violation of Catholic doctrine, because it will have the effect of coercing some diocesan employees to receive a vaccination which they do not want.”

But she indicated that the ethical and medical concerns are also serious in and of themselves.

“The health benefit to me didn’t justify the compromise with the evil of abortion. I get that that’s a different calculation for everybody, but for me, no — I’m healthy, I’m 51, I’m not gonna die from this disease. It’s not worth it to me,” said Hay.

She pointed out in her email to members of the diocese of Knoxville that “In its recent statement on the morality of using some anti-COVID vaccines, the Congregation for the Doctrine of the Faith took the opportunity to emphasize the voluntary nature of vaccination, writing, ‘Practical reason makes evident that vaccination is not, as a rule, a moral obligation and that, therefore, it must be voluntary.’”

According to Hay, “The diocesan plan is also contrary to the Catholic faith because it tends toward a divided society of “vaccinated” and “unvaccinated.”

Hay noted that the mandate is not only morally, but physically problematic, citing her sister as an example. She said her sister “is definitely anti-abortion,” but “for health reasons cannot take this vaccine.” Her sister’s doctor has even acknowledged this fact, said Hay, but will not give her a medical exemption for fear of putting their “license is at risk.”

Hay argues that even in addition to the physical risk posed by the jabs, they have not been proven to save lives. In her email to Stika, she wrote, “None of the available vaccines have been proven by a clinical trial to save lives by the standard clinical endpoint of all-cause mortality.  In all Phase III clinical trials, the death rates in the placebo groups were statistically equal to the death rates in the vaccination groups.”

“In my mind we are protecting them from the lawsuits that are going to be way more expensive than whatever dent we put in their finances,” Hay told LifeSiteNews.

“Because the life-saving qualities of all COVID vaccines remain unproven, the diocesan plan also runs afoul the Nuremberg code,” Hay continued. “History will not look kindly on what you are doing now.”

Hay advises all Catholics of the Knoxville Diocese to:

The vaccination mandate which the Diocese of Knoxville plans to implement is contrary to the Catholic faith, because it coerces vaccination, and because it tends toward the creation of a divided society, punishing those who remain “unvaccinated.”  If this plan goes into effect, I plan to participate in the campaign to “Defund the Diocese.”