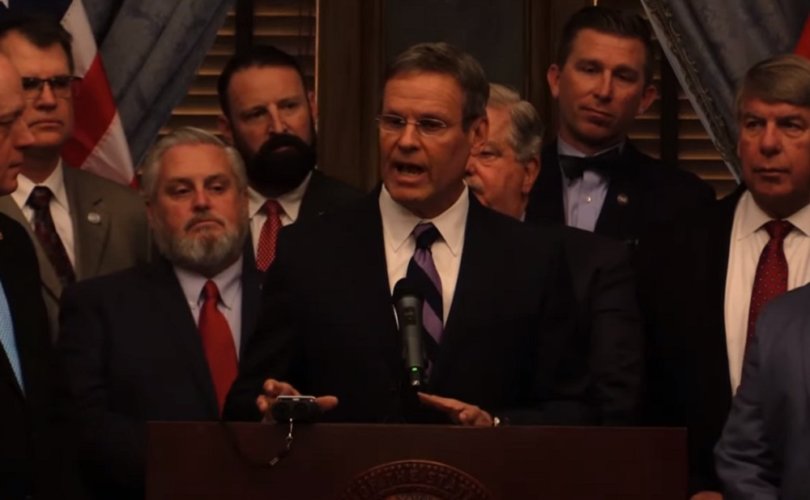 NASHVILLE, January 24, 2020 (LifeSiteNews) — Tennessee’s Gov. Bill Lee (R) touted a proposed “enhanced” bill that would add a number of protections for unborn babies whose fetal heartbeat can be detected, which normally occurs at around six weeks of gestation.

On Thursday, Gov. Lee told the assembled media at the state capitol that his yet to be introduced bill will be a “monumental step forward in celebrating, cherishing and defending life.”

Provisions in the bill will protect even babies conceived in rape and incest, which are conditions frequently cited by abortion advocates as sufficient reasons to end an unborn life. Also, pregnant mothers must be given access to an ultrasound of their child before deciding on an abortion.

The governor said abortionists would not be able to kill an unborn child upon detection of a fetal heartbeat, or if they become aware that a request for abortion is “motivated by sex, race or disability diagnosis of the child.” As for the importance of the ultrasound provision, Lee said, “We know that when a mother views her unborn child and hears a heartbeat, hearts and minds are changed.” Lee said the bill stems from his “commitment to defending the intrinsic dignity of all people.” Adding that Tennessee is joining other states in adding protections for unborn babies, Lee said he is proud that Tennessee is taking a stand in protecting life.

In 2019, similar legislation did not make its way out of the Senate. Lieutenant governor and state Senate speaker Randy McNally said he is confident, however, that the bill will be well received by his Senate colleagues and the state General Assembly. Both chambers have Republican majorities.

State rep. Susan Lynn (R) , who presides over the Finance, Ways and Means Committee, said, “Tennessee is a strongly pro-life state, and as a result, they have sent strongly pro-life leaders to represent them in this General Assembly. We have a long, proud history of protecting life.” Among the pro-life legislative achievements she mentioned were provisions for parental consent, prohibition of coercion, and requirements for the proper disposition of fetal remains. “This bill is the next step in our long, hard-fought fight to restore the full right to life to the unborn,” she said.

Another such achievement was the 2014 Tennessee constitutional amendment — Amendment One — that declared that the state constitution does not guarantee the right to an abortion. Though challenged in court, Tennessee was ultimately the victor when the measure was upheld.

In other states, such as Georgia and Mississippi, similar legislation has been enacted but stymied by court challenges. Pro-life advocates hope that by taking these lawsuits to the U.S. Supreme Court, now dominated by Republican nominees, there will be a possibility of overturning the 1973 Roe v. Wade Supreme Court decision that mandated abortion nationwide. “You can’t overturn Roe v. Wade without challenging the constitutionality of it,” said Sen. Mike Bell (R), according to Fox News.

Pro-abortion activists claim that the proposed bill is “blatantly unconstitutional” and an infringement of women’s rights. Democrat legislators slammed Gov. Lee, saying he is engaging in divisive and extreme politics.

The Tennessean reported that Ashley Coffield, president and CEO of Planned Parenthood of Tennessee and Northern Mississippi, said: “Do we want girls in Tennessee to have bright futures or do we want them to be fighting for basic health care they need to control their lives and plan their families?”

In 2019, the Catholic bishops of Tennessee recommended against legislative support for a similar heartbeat bill, even while they were “wholeheartedly” in sympathy with the sponsors of the legislation. Basing themselves on apparently prudential grounds, they were against the bill because similar legislation in other states had been passed, enacted, and then overturned by the courts, thus incurring considerable court costs for the state governments and delaying the pro-life cause.

Instances like these remind us that we must be prudent and support other pro-life pieces of pro-life legislation that stand a better chance of being upheld in the courts and, possibly, become the vehicle that forces the U.S. Supreme Court to overturn Roe once and for all.

Given the unjust laws recently signed in New York and considered in Virginia, we pray urgent support will be given to the “Human Life Protection Act” being considered within the Legislature that would automatically ban abortions in Tennessee should the Roe vs. Wade Supreme Court decision be overturned.