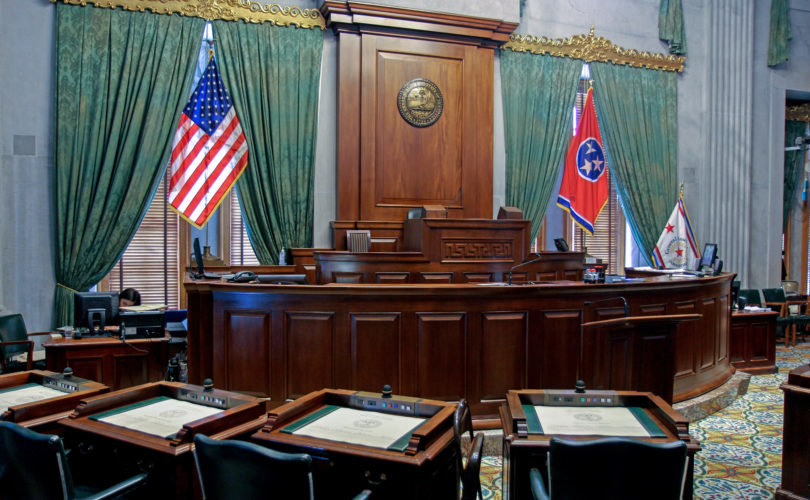 Senate Chamber in the Tennessee State Capitol building in NashvilleShutterstock

On Monday, the Tennessee House passed Senate Bill 126, a healthcare bill that bars prescription of cross-sex hormones to minors with gender dysphoria.

SB 126 “prohibits a healthcare prescriber from prescribing a course of treatment that involves hormone treatment for gender dysphoric or gender incongruent prepubertal minors.” The bill passed the Senate by a 24-6 vote last month before the House approved it by an overwhelming 43-vote margin earlier this week.

SB 126 has not yet been signed by Gov. Bill Lee, who enacted a ban on transgenders in women’s and girls’ sports in March.

Cross-sex hormones, which virtually always follow use of puberty blockers in gender-confused children, cause infertility, permanently halt natural puberty, and are linked to fatal side effects, including heart attack and stroke. The FDA has never approved cross-sex hormones for gender dysphoria, and the drugs have been barred for minors in the U.K. and in leading European hospitals.

A study published by Dutch researchers in 2018 found that the vast majority of people who take cross-sex hormones to “affirm” their so-called transgender identities later undergo surgical removal of sexual organs. No long-term prospective studies ever have been conducted on minors subjected to experimental “gender transition” procedures.

Along with SB 126, Tennessee lawmakers approved two other pro-family bills before the legislative session ended Wednesday. HB 1182 requires businesses to post notices if they let people use bathrooms or other facilities designed for the sex other their own. Another measure would allow students to sue schools that open up sex-specific facilities to members of the opposite sex.

Gov. Lee, who has never once vetoed a bill passed by the legislature, has not stated whether he intends to sign the policies. LifeSite launched a new voter outreach campaign today to help voters contact the governor and encourage him to authorize SB 126.

Tennessee would become the second state to prohibit cross-sex hormones for minors, following the lead of Arkansas, which enacted a broad ban on child “sex change” procedures last month. Similar bills remain under consideration in the legislatures of Texas and Alabama, where they have passed at least one chamber.