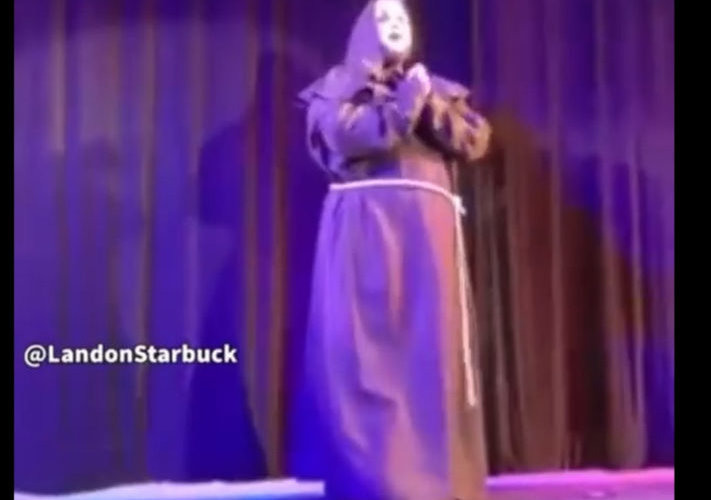 A drag show performer at Tennessee Technological University dressed as a Franciscan friar.Twitter/Screenshot

(LifeSiteNews) — A student group at Tennessee Tech University hosted a drag show last month featuring minors in the audience and a performer dressed as a Franciscan friar.

A video of the mockery was posted recently on Twitter by Landon Starbuck, president of Freedom Forever, an organization devoted to eliminating child grooming and exploitation. It has sparked consistent backlash, including a public statement of disapproval from the university’s president.

“I am disturbed and dismayed about the activities in a video circulating on social media from a recent event on Tennessee Tech’s campus,” university president Phil Oldham wrote in a September 8 statement. “I do not feel the activities in the video represent Tech’s values, and I do not condone explicit activity where minors are present. I also am offended by disparaging mockery toward any religious group.”

The video shows the performer wearing a brown Franciscan robe and hood, lip syncing to various songs. He poses with his hands folded, imitating prayer, and makes the sign of the cross before throwing off the robe to show a revealing outfit underneath. Moving evocatively across the stage, the performer accepts tips from at least four children.

“To be clear, this was not a university sponsored event,” Oldham continued in his statement. “No university funds were used. Two registered student groups facilitated the scheduling and promotion of the event. Although registered student organizations have the ability to reserve space on campus, the programming should not include obscene, lewd or explicit activities.”

— Article continues below Petition —
Free Enoch Burke, the teacher jailed after not using teen's "they" pronoun
Show Petition Text
16835 have signed the petition.
Let's get to 17500!
Thank you for signing this petition!
Add your signature:
Show Petition Text

Previously, UC Pride has sponsored numerous drag events at Tennessee Tech’s BackDoor Playhouse, which is on campus. In February, the group co-sponsored a show featuring a contestant on RuPaul’s “Drag Race.” A month later, it put on “Drag at the BackDoor,” which serves as “a monthly fundraiser” to support the LGBT nonprofit.

UC Pride also contributed to the organization of a “drag queen story hour” on campus, writing in an advertisement that “any and all ages are welcome to attend.” The group appears to be associated with most of the drag events hosted on the Tennessee Tech campus.

After the circulation of the disrespectful routine, Oldham declared that similar events will be postponed until a detailed inquiry is completed, including a show that had previously been planned for September 24.

“The university is investigating the activities that took place at this event and the circumstances surrounding its scheduling and promotion,” he wrote in his statement. “As of now, all public events scheduled on campus by these sponsoring organizations are cancelled pending a review.”

“All students, faculty and staff deserve care and consideration, as well as representation and respect. The investigation focuses on the inappropriate involvement of minors and a review of our policies and procedures.”

The Foundation for Individual Rights and Expression (FIRE) posted a response to the statement, rejecting Oldham’s investigation.