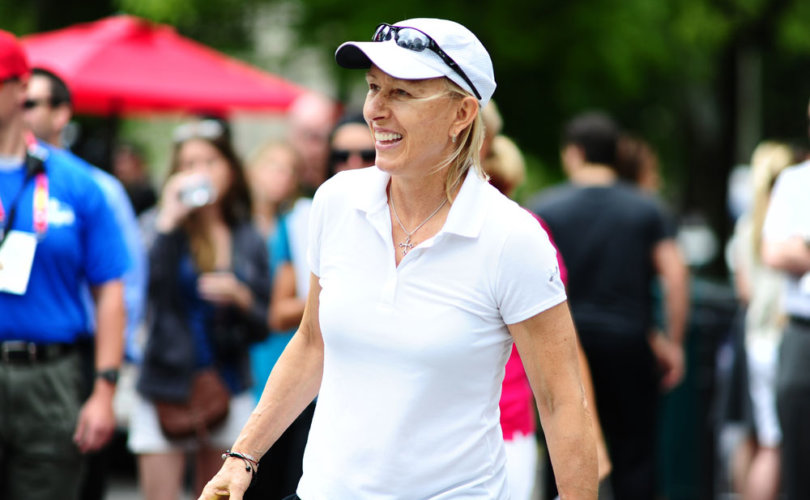 December 21, 2018 (LifeSiteNews) – Legendary tennis star Martina Navratilova, an outspoken lesbian and feminist, stunned some members of the LGBT world when she pointed out that men should not be able to compete as women.

“Clearly that can’t be right,” the tennis legend tweeted. “You can’t just proclaim yourself a female and be able to compete against women. There must be some standards, and having a penis and competing as a woman would not fit that standard … ”

The sports icon who stood her ground for nearly two days when challenged about her claim either had a sudden change of mind or was perhaps pressured by LGBT forces with whom she normally aligns seamlessly.

Before the tweet disappeared, Navratilova remained firm as she replied to a transgender sports enthusiast who asked her to look into the topic further and reconsider her opinion:

I don’t need to look into this as far as I can tell you. I stand by what I said and when I don’t know something I will check it out. When it comes to sports, we need to make sure we have a level playing field. That is all in talking about- fairness. The end.

With the removal of the initial tweet in the thread, it is less clear whether or not Navratilova believes it’s OK for men who “identify as women” to compete in women’s sports.

The tennis champ, who has won a total of 18 Grand Slam singles titles including the Wimbledon women’s single title nine times, has generally been a reliable supporter for a wide spectrum of LGBT causes.

Last year, the tennis star got into a heated battle with fellow tennis great Margaret Court over “gay marriage” in Australia. When Court came under fire for objecting to same-sex marriage, Navratilova plied on, asking, “How much blood will be on Margaret's hands because kids will continue to get beaten for being different? This is not OK. Too many will die by suicide because of this kind of intolerance, this kind of bashing and yes, this kind of bullying.”

She has also insisted that the U.S. Congress “must block Trump’s ban on transgender people in the military.”

Yet when it comes to women’s sports, Navratilova had seen things differently and defended her own turf against the influx of transgenders.

Despite the claims of the BBC article, which is dismissive of those who want to block “biological men” who are “transgendered” from competing in the world of women’s sports, there is plenty of evidence to support keeping the sexes separated biologically.

Fallon Fox, a man who identifies as a woman, quickly defeated his female mixed martial arts (MMA) opponent by giving her a concussion and a breaking an eye socket.

In the last few years, boys and men who identify as females have won competitions against girls and women in track and field, cycling, rugby, boxing, and MMA.

Former competitive boxer Dorothy McLean asked last year, “When is it OK for a man to take a gold medal, a title, an athletic scholarship away from a woman?”

“It seems that he can if he says he is a woman, and they’re both athletes,” said McLean, replying to her own question.