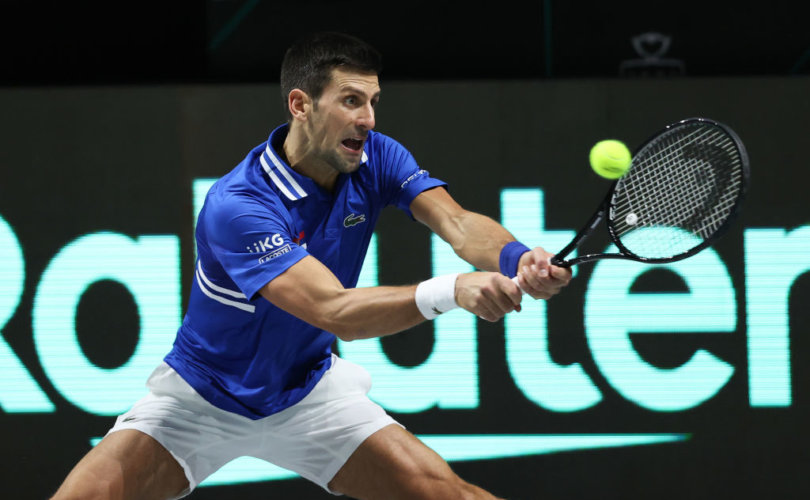 UPDATE, Jan. 5, 2021, 4:31 p.m. — The Australian Border Force (ABF) has officially denied entry to Djokovic, who is now forced to leave Australia and won’t be able to compete in the Australian Open.

“The ABF can confirm that Mr Djokovic failed to provide appropriate evidence to meet the entry requirements to Australia, and his visa has been subsequently cancelled,” a short statement reads. “Non-citizens who do not hold a valid visa on entry or who have had their visa cancelled will be detained and removed from Australia.”

MELBOURNE, Australia (LifeSiteNews) — Australian officials have denied entry to the country for tennis superstar Novak Djokovic after border control discovered a discrepancy in his visa application, reports say. The Serbian tennis player had been granted a medical exemption to the COVID jab requirement to participate in the Australian Open (set to start on January 17).

After landing in Melbourne Wednesday, the world’s number one was not permitted to proceed past Australian Border Force (ABF) due to an alleged mistake on his visa application, The Times reported.

According to the report, Djokovic’s team had submitted an application which does not work for those who have received a medical exemption to the country’s strict COVID jab requirement for international travellers. Consequently, Djokovic was held at the airport in Melbourne and questioned by ABF staff while the federal government attempted to liaise with the local authorities in Victoria to correct the application.

Jaala Pulford, Victoria’s acting Minister for Sports, announced on social media that the federal government had requested intervention from the state government to support Djokovic’s entry into the country.

“We will not be providing Novak Djokovic with individual visa application support to participate in the 2022 Australian Open grand slam,” she declared. “We’ve always been clear on two points: visa approvals are a matter for the federal government, and medical exemptions are a matter for doctors.”

The Federal Government has asked if we will support Novak Djokovic’s visa application to enter Australia.

We will not be providing Novak Djokovic with individual visa application support to participate in the 2022 Australian Open Grand Slam.

Djokovic’s denied entry comes just a day after he announced that two independent panels of medical experts had granted him a medical exemption to the COVID shot mandate for entry into the country.

A statement from the organizers of the Australian Open tournament stressed that one of the bodies responsible for determining Djokovic’s exemption was the Independent Medical Exemption Review Panel, a group which is appointed by the Victorian Department of Health.

“They assessed all applications to see if they met the Australian Technical Advisory Group on Immunisation guidelines,” the statement informed.

However, Victorian state Home Affairs Minister Karen Andrews said in a Wednesday statement that “any individual seeking to enter Australia must comply with our strict border requirements”.

“While the Victorian government and Tennis Australia may permit a non-vaccinated player to compete in the Australian Open, it is the Commonwealth government that will enforce our requirements at the Australian border,” she said.

Prime Minister of Australia Scott Morrison weighed in on Tuesday after criticism of the state government poured in regarding Djokovic’s exemption. The prime minister clarified that he does not want to be seen as favoring Djokovic’s application on the basis of his superstar status, but ultimately delegated the responsibility for determining the authenticity of his medical exemption to the local Victorian government.

Morrison said the Serb “must provide acceptable proof that he cannot be vaccinated for medical reasons,” but that if the evidence is found wanting, “he won’t be treated any different to anyone else and will be on the next plane home — there should be no special rules for Novak Djokovic.”

“If medical exemptions have been provided by medical professionals and that has been furnished to him as a proviso for him to get on that plane, well, that will have to stack up when he arrives in Australia. There should be no special rules for Novak Djokovic at all. None whatsoever.”

However, the Victorian government “provided him with an exemption to come to Australia, and so we then act in accordance with that decision,” he said.

The 34-year-old sportsman has kept silent on whether he has received a COVID shot throughout the coronavirus crisis, stating his conviction that a person’s medical history and decisions ought to remain private.

He did reveal his inclination not to take the jab back in April as part of a Facebook Live video with fellow Serbian athletes, saying, “Personally I am opposed to vaccination and I wouldn’t want to be forced by someone to take a vaccine in order to be able to travel.”