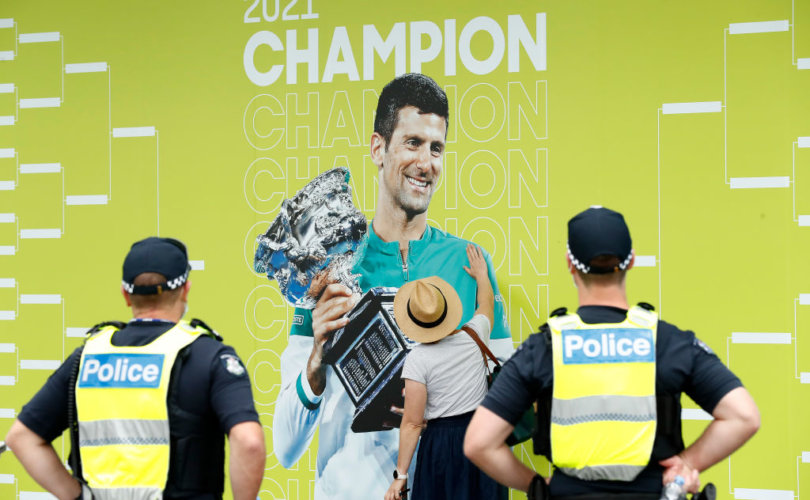 A spectator touches a banner of 2021 Men's Australian Open winner Novak Djokovic of Serbia as police officers look on during day one of the 2022 Australian Open at Melbourne Park on January 17, 2022.Photo by Darrian Traynor/Getty Images

PARIS (LifeSiteNews) — Tennis star Novak Djokovic might not be allowed to compete in the French Open later this year, following the tightening of COVID vaccine passport rules in France. Australia has already prohibited the Serbian player from participating in the Australian Open which started yesterday.

The French Sports Ministry announced Monday that there would be no exemption from the new vaccine passport law which was adopted by the French Parliament Sunday following two weeks of heated debates and controversies.

The new rule requires people to show proof of vaccination in order to access public spaces such as restaurants, cafés, as well as leisure and sports venues. Showing a negative COVID test will no longer be sufficient.

Players from abroad wishing to take part in major sporting events, including the French Open, will therefore have to be vaccinated.

“The vaccine passport will apply to everyone who is a spectator or a professional sportsperson. And this until further notice,” the ministry said, without ruling out a loosening of the rules between now and the next French Open in May.

“As far as Roland Garros [the French Open] is concerned, it’s in May. The situation may change between now and then and we hope it’ll be more favourable. So, we’ll see, but clearly there’s no exemption.”

The news comes only a day after the Serbian tennis star was deported from Australia following a controversy over his vaccination status and personal views on COVID-19 vaccines and vaccine mandates.

Australia’s immigration minister Alex Hawke said he feared Djokovic presence in the country might lead to “an increase in anti-vaccination sentiment.”

Having lost his case in court, Djokovic left Melbourne Sunday just a day before the start of the Australian Open. He will not be allowed in Australia for another three years.

The latest vaccine passport rule coming out of France could mean another setback for Djokovic in his chase for the 21st Grand Slam title. This would represent another major blow to the career of the world’s number one tennis star, all because of his personal views on the COVID-19 vaccines and his choice not to get the shot.