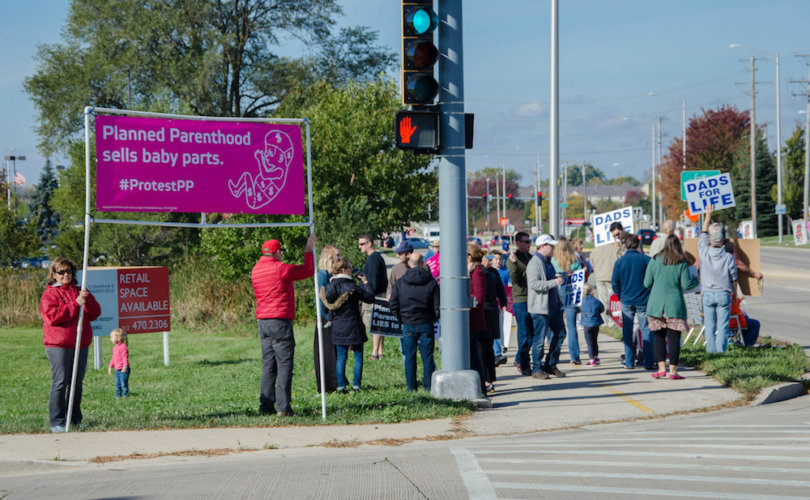 April 22, 2016 (LifeSiteNews) – Tens of thousands of Americans are expected to turn out tomorrow to protest outside Planned Parenthood facilities from coast-to-coast.

The annual event will draw people of conscience to at least 200 cities to protest the abuses, ideology, and taxpayer funding of the nation's largest abortion provider.

“The undercover videos we saw last year showed the cruelty of abortion in a singular way,” said Eric Scheidler, executive director of the Pro-Life Action League, one of the event's three organizers, which collectively are known as #ProtestPP.

“It's chilling to see Planned Parenthood's doctors talk about how to crush an unborn child's body in order to most effectively procure his or her organs,” he said. “This organization should not be receiving any taxpayer funding for any reason.”

Yet it has received plenty of federal funding: $553.7 million from taxpayers – mostly from Medicaid and family planning funds – according to Planned Parenthood's most recent annual report.

Ironically, that helps bolster its image as an esteemed health care provider to poverty-stricken women, something organizers say couldn't be further from the truth.

CEO Cecile Richards testified before Congress that approximately 80 percent of its non-governmental funds come from abortion.

The organizers say that last year, a public backlash spurred more than 100,000 people to speak out against Planned Parenthood at 400 locations.

“The public was appalled at Kermit Gosnell's 'House of Horrors,'” Scheidler said.

The most recent series of undercover videos released by the Center for Medical Progress, depicting the abortion providers' little-known practice of harvesting aborted babies' organs and tissue for biomedical companies in exchange for money, have shown inhumanity is not restricted to “the 'back-alley' abortionists they claim to abhor,” Scheidler added.

In part because of that, the company has sought to exact revenge on David Daleiden and CMP, the organizers said. Daleiden is facing private lawsuits, as well as criminal charges in Houston for using a fake ID in order to infiltrate the highest levels of the abortion industry.

“Planned Parenthood and their powerful allies in government are trying to discredit and silence pro-lifers who are guilty of nothing more than exposing the shocking truth about their abortion practices,” said Mark Harrington, executive director of Created Equal, the third organization leading #ProtestPP.

“As an investigative journalist, Mr. Daleiden's protected free speech is being criminalized while Planned Parenthood's criminal behavior is being entirely overlooked” – in fact, subsidized.

“On April 23, we'll be setting the record straight in communities all over the country,” Harrington said.

From now on, the protests will be held every year on the fourth Saturday of April.

A list of all Saturday's protest locations is available here.