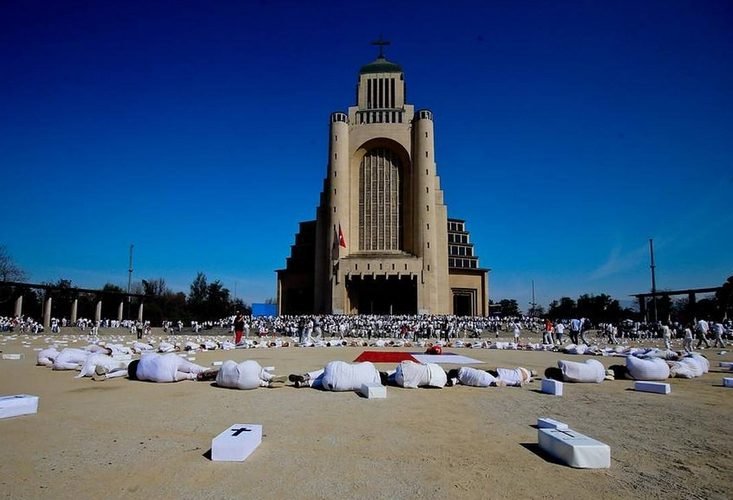 SANTIAGO, Chile, September 8, 2015 (LifeSiteNews) — Thousands of women dressed in white peacefully and prayerfully rallied at the Sanctuary of Our Lady of Carmel of the Maipú and at 32 other points all across the country of Chile.

The impressive images from these rallies highlight the strong rejection of a majority of the country of the government’s march to legalize abortion.

The South American nation, which has seen a large drop in its maternal mortality rates after prohibiting all abortion, is the latest battleground for the right to life in the continent.  That is because Chile happens to have one of the most pro-abortion presidents in the world, the socialist Michelle Bachelet, who has long fought to legalize the murder of unborn children.

The women in white movement is composed of a broad coalition of pro-life civil society organizations and has had remarkable success at communicating the pure and peaceful nature of the struggle to protect the right to life.

In 2006, during her first term as president of Chile, Michelle Bachelet attempted to legalize and subsidize the abortifacient morning after pill, only to have the law overturned by the constitutional court in 2008.

On Saturday morning, thousands of protesters around the entire country marched in solidarity, carrying shoe boxes painted in white with black crosses representing the coffins of children murdered through abortion.

Despite the success of the women in white campaign, many pro-life activists expected Chile to legalize abortion sooner in Bachelet’s presidential term, as she had stated her intentions clearly and had both houses of Congress under her leftist coalition party’s control.

However, the combination of popular resistance and the providential outbreak of a major corruption scandal, in which the president’s son has been charged with peddling his mother’s influence to obtain large loans, seemed to delay Bachelet’s march to legalizing abortion.

But this delay was not permanent.  While the legislation to legalize abortion is still technically being debated in the lower chamber of the Chilean Congress, time is short for Chilean pro-lifers as it is expected to be voted upon and passed by the president’s leftist coalition party today.

The Archbishop of Concepcion, Msgr. Chimoli, recently stated that “those who promote the legislation are ignoring the Universal Declaration of Human Rights which recognizes that all individuals have the right to life,” and that “every human being everywhere has the right to have his or her personhood recognized.”  He concluded that because the Chilean constitution explicitly protects the right to life of the preborn child “the abortion law is unconstitutional.”

In June, Pope Francis welcomed Michelle Bachelet to the Vatican, and he was reported to have discussed the abortion law with the Chilean president.  In that occasion the women in white also were able to highlight President Bachelet’s empty human rights rhetoric by holding a silent vigil outside the meeting.

Regardless of the outcome of today’s vote, politicians and members of the pro-life community have indicated that they will seek to overturn the law in court.