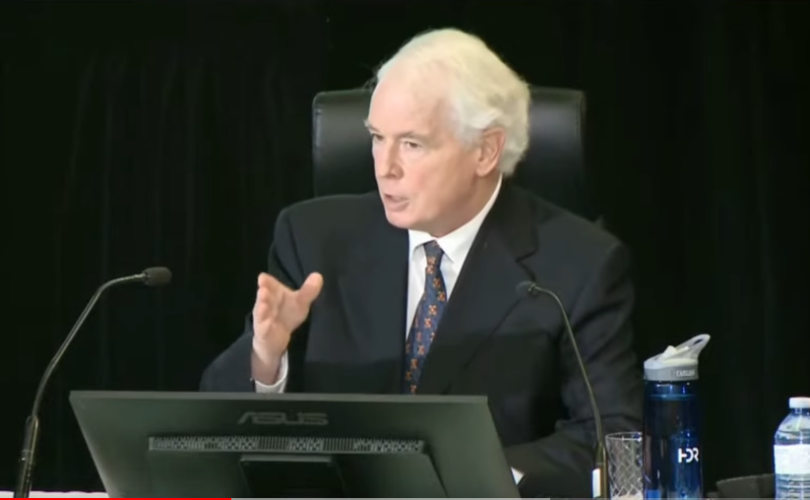 OTTAWA (LifeSiteNews) — After a heated exchange during testimony at the Public Order Emergency Commission hearings on Tuesday, Freedom Convoy lawyer Brendan Miller was asked to leave the room by Justice Paul Rouleau.

The tense exchange began after Miller had asked Rouleau if Public Safety Minister Marco Mendicino’s director of communications, Alexander Cohen, could be called to testify, with Miller also wanting clarity on outstanding written motions he had filed to have some of the documents submitted by Prime Minister Justin Trudeau’s federal government be unredacted.

During the heated back-and-forth, Miller argued that there was “relevant” points in said documents that would serve as evidence about “misinformation” in a text message chat that was crucial “in building the narrative with respect to the protesters in Ottawa being extremists.”

Rouleau told Miller that he was not going to “do this orally right now,” to which a frustrated Miller responded, “We’re given 15 minutes to cross-examine, to elicit relative material evidence, and we have relevant and material witnesses here.”

Rouleau said that the commission’s schedule had to be kept, to which Miller quipped, “Sir, the schedule’s not as important as getting at the truth.”

To this, Rouleau told Miller that applications for witnesses had to be made in writing.

At this point there was a 15–minute break, but the tense exchange picked up where it left off when the meeting reconvened.

Rouleau told Miller, “I’m sorry, the application, if you want to do it, you’ve advised it’s to be done in writing and not in the middle of the presentation.”

Miller, appearing frustrated again, responded to Rouleau, “We’ve filed two motions in writing at your direction that you’ve refused to rule on with respect to the redaction of documents from the Government of Canada.”

Rouleau responded by telling Miller he was calling another “break while you’re asked to leave.”

“I will return in five minutes, if security could deal with the counsel,” said Rouleau.

Outside of the hearings, Miller said to reporters that the Canadian government “has redacted these documents claiming they are irrelevant or that they are subject to cabinet confidence.”

“This is despite the fact the law is abundantly clear that cabinet confidence does not apply to political staffers,” he added.

Miller noted that the “Government of Canada has continuously, and every day, dropped hundreds of documents on the parties. The parties are frustrated, not just myself,” adding that it is his duty “as a lawyer is to uncover the truth.”

Later in the day, Miller was allowed back into the hearings to cross–examine the witnesses but Rouleau in a decision rejected Miller’s request to compel the release of unredacted government documents and call additional witnesses.

This is not the first time Miller has drawn headlines for going toe-to-toe with the government.

Earlier in the week, Miller alleged that he knows the identity of the provocateur who was photographed holding a Nazi flag during the Freedom Convoy in late January, saying the now-infamous person is a former Toronto Star manager and publicist.

The Public Order Emergency Commission inquiry into Trudeau’s unprecedented use of the Emergencies Act (EA) to crush the Freedom Convoy began October 13 and is expected to conclude this Friday, with Trudeau himself taking the stand.

While Trudeau ultimately revoked the EA on February 23, under the act, many Canadians who supported the protest were targeted by the federal government and even had their  bank accounts frozen without a court order.