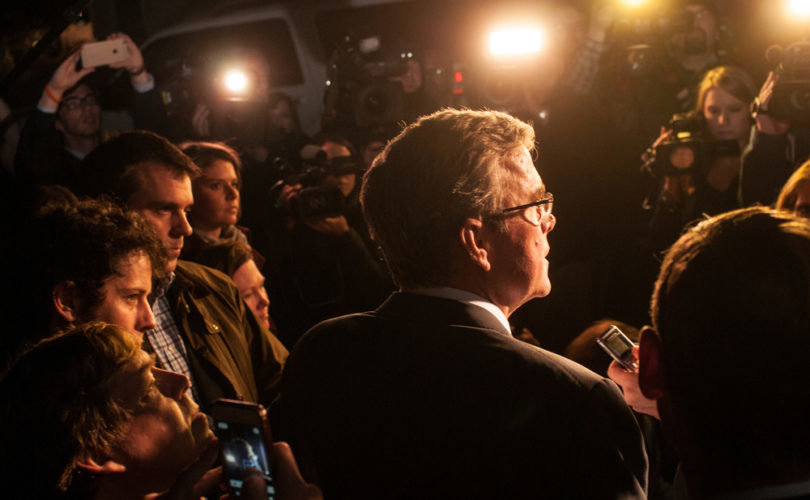 WASHINGTON, D.C., November 17, 2015 (LifeSiteNews) – The words of Dr. Ben Carson, and the actions of Gov. Jeb Bush, disqualify them both from serving as president of the United States, a leading pro-life leader said today.

“We have seen what it is like to have a president who does not value every life equally, and we certainly do not need another,” said Troy Newman, the president of Operation Rescue. “In my opinion, Ben Carson's statement dismissing Terri's life as 'nothing,' and Jeb Bush's failure to take action to save Terri, has disqualified them both from the office of president.”

Over the weekend Dr. Ben Carson, one of the current front runners for the Republican presidential nomination, dismissed the Terri Schiavo case as “much ado about nothing.”

Schindler, who later opened the Terri Schiavo Life and Hope Network to advocate for brain injured patients around the country, said, if elected president, Ben Carson would “represent a one-man death panel.”

Rev. Pat Mahoney, the leader of the Christian Defense Coalition, said, “It is hard to imagine any more insensitive and uncaring language describing the tragic circumstances of Terri Schiavo's death.”

“With comments like this, one shudders at what kind of Presidential policies he would have concerning end-of-life issues and working with the disability community,” Rev. Mahoney said.

Dr. Carson had previously concerned pro-life voters by saying he had referred pregnant women to abortionists if their babies suffer from fetal anomalies and declaring it would be “foolish” not to use the organs of aborted babies for medical research.

Jeb Bush, who was governor of Florida during the Terri Schiavo case, intervened to try to save her life from a court order depriving her of all food and hydration.

However, he backed down from a last ditch effort that may have saved Schiavo's life, according to local media. Jeb Bush appealed an order issued by Pinellas-Pasco County Circuit Judge George W. Greer to deny Schiavo the nourishment keeping her alive. Under Florida law, that appeal suspended the existing order.

Jeb Bush issued the appeal at 8:15 a.m. on Saturday, March 26, 2005. Gov. Bush ordered the Florida Department of Law Enforcement (FDLE) to enter the Hospice House Woodside in Pinellas Park and move her to Morton Plant Hospital, to reinsert her feeding tube. But when city police and county sheriff's officials stood their ground, he reversed himself.

“The FDLE called to say they were en route to the scene,” an unnamed city police official told the Miami Herald. “When the sheriff’s department and our department told them they could not enforce their order, they backed off.”

Just before 11 a.m., Judge Greer found out about the appeal and legally blocked state officials from taking any further action.

Jeb Bush has also concerned pro-life Republicans, saying he would have no pro-life “litmus test” for future Supreme Court nominees, saying “of course” he supports exceptions for abortion in the case of rape and incest, and floating attack ads painting his former protege Marco Rubio as too pro-life to win the general election.

After leaving office, Jeb Bush sat on the board of Bloomberg Philanthropies, which launched a worldwide campaign to loosen abortion restrictions in pro-life countries, in partnership with Planned Parenthood Global. Bush served in that capacity until last December, shortly before launching his presidential campaign.

The Ben Carson presidential campaign told LifeSiteNews it would issue a comment today. However, no comment has been issued by the close of business.