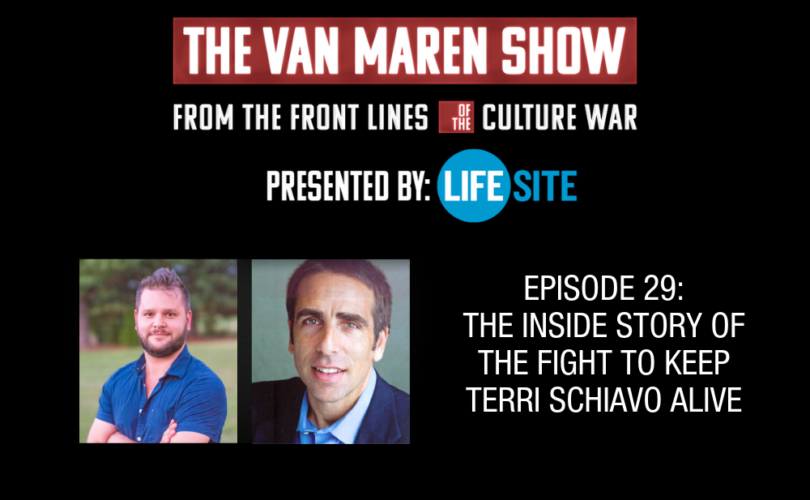 August 14, 2019 (LifeSiteNews) – Jonathon Van Maren speaks with Bobby Schindler, brother of Terri Schiavo, on this week’s episode of The Van Maren Show. Schindler advocates for the medically vulnerable and is a full-time advocate, speaker, and writer. He’s a member of the American Society for Bioethics and Humanities and his writings have appeared in The Wall Street Journal, Chicago Tribune, Time magazine, and many more.

Schindler starts the conversation by describing what it was like to grow up with Terri, sharing the real happiness before the tragic story of her death: “Terri was always one that was always laughing in the house, whether it was at my dad’s corny jokes or just whatever.”

It wasn’t long after the entire Schindler family relocated to Florida that things started to deteriorate. And then on February 25, 1990, Terri collapsed in her home while alone with her husband Michael. Schindler and Terri’s dad called him and asked him to check on his sister. Schindler then shares what was happening in the weeks and months following the initial collapse.

Going quickly from the few months after the collapse, during which time they saw Terri improve, Schindler skips ahead to eight years later. It was then that Michael Schiavo took matters into his own hands and pushed to have his wife’s feeding tube removed, despite the fact that Terri was not considered to be in a “vegetative state.”

“Jonathon, to this day, I believe Michael perjured himself, because the only way he could petition the courts is if he proved his claim that Terri made these wishes that she wanted to die. As I mentioned earlier, they never surfaced for eight years. And Michael really needed this to go to court. So I believe he perjured himself,” Schindler explains.

Schindler goes on to share how Glenn Beck and Governor Jeb Bush got involved, which propelled the case to the international spotlight. He recounts all the details leading up to the day her feeding tube was removed for the last time before she died on March 31, 2005 of dehydration, and gives some of the hard details of what it’s like to actually watch a person being starved and dehydrated to death for 13 days.

He reminds us that it’s not quite as peaceful as the medical community often claims.

Van Maren and Schindler wrap up their conversation discussing how fewer of the cases Schindler has seen in recent years have involved fights against family members. Instead, they’ve been fights against healthcare commissions, ethics committees, and insurance companies. “It’s become a real problem in our healthcare system today.”

The Terri Schiavo Life & Hope Network provides a 24/7 national crisis lifeline while working to “uphold human dignity through service to the medically vulnerable.” Since its founding in 2005, they have advocated for and assisted more than 2,500 medically vulnerable patients.